The rails they are a changin': Summer observations in Ottawa

Work on Ottawa's commuter rail network has kicked into high gear this summer, making this perhaps the busiest time for rail construction in Ottawa in many decades. You can't go anywhere near a bus shelter without seeing signs promiting the city's Confederation Line. 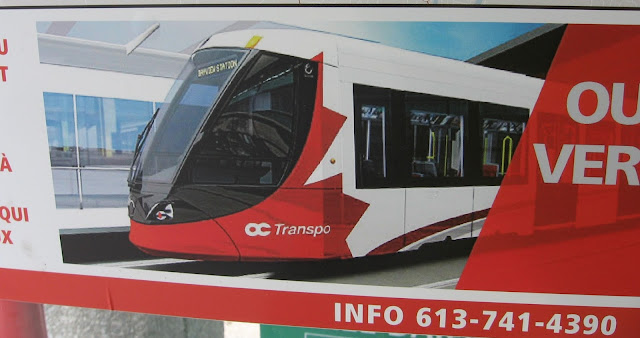 With the taglines "There's light rail at the end of this tunnel," and "Our transit future is on track," the signs of progress are hard to miss. This ad depicts what the new light rail trainsets will look like. I think they look like insects in the cab area, but that's just me. Work on the Confederation Line is really proceeding full steam ahead in many areas. In many spots, work on the rail stations is beginning. The first ties have even been laid, although this was done for the media so it was largely ceremonial.

Recently, city councillors discussed the state of the O-Train Trillium Line, an 8-kilometre rail line that currently accommodates four Alstom Coradia LINT diesel trainsets. The line has seen eight service interruptions since launching with the new power several months ago, but the complaints have been few and far between recently. 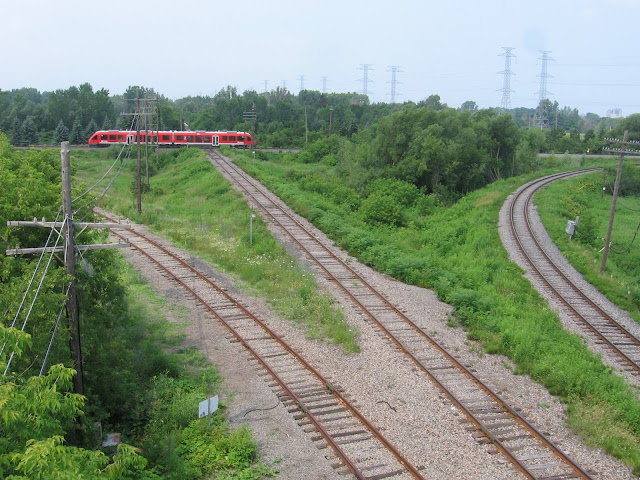 There was talk at City Hall about whether the Trillium Line should be electrified early to make the transition to the all-electrified service smoother. As it stands, the Confederation Line is due to open for service in 2018.

Also this summer, city council's finance committee approved a $3-billion second phase of the LRT system, including an extension of the Trillium Line from its southern Greenboro terminus all the way south to the Riverside South neighbourhood. The Ottawa International Airport Authority's CEO said his organization is prepared to pay for an additional light rail station that would connect the Trillium Line to the airport. The issue of who would pay for a spur line off the Trillium Line to the airport is still a question that needs to be answered, since the existing rail line through airport lands does not pass terribly close to the terminal. Overall, the fact that the city has endorsed a southern expansion is a positive move, given previous reluctance to use the old CP Prescott Subdivision right-of-way for a southern commuter rail expansion.

The second phase of the light rail system will bring the western network from Tunney's Pasture to the Bayshore Shopping Centre with a stop at Baseline Station at Algonquin College. The college unveiled its own rail tunnel, which has been built for quite a while, but has been kept under wraps until recent weeks. The tunnel will travel beneath the college's Centre for Construction Excellence.

The eastern commuter rail extension will take trains past Blair Station (Phase I terminus) all the way to Place d'Orléans Shopping Centre. The plan still doesn't address the most urgent areas of commuter need, namely Kanata in the west and vast swaths of Orleans in the east, namely the Trim Road area. Can someone please mention the existing remnants of the Beachburg Sub in North Kanata please? Or is that too logical?

Meanwhile, nothing has been said about the fate of the Prince of Wales railway bridge, although it seems a foregone conclusion that the bridge will be lost as a potential commuter rail link to Gatineau. The last remaining efforts to save this rail link are fighting an uphill battle to say the least. 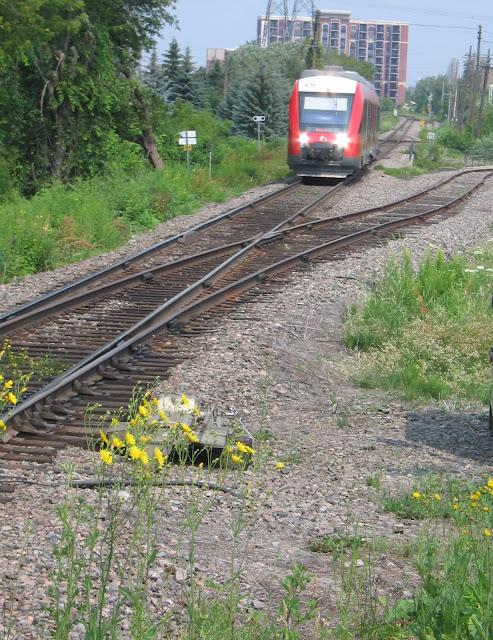 O-Train C9 makes its way south to Greenboro station on the Trillium Line.

One of the consequences of the O-Train Confederation Line construction is that the bus Transitway road past Via Rail's central train station has been closed. Bus service continues to serve the Tremblay Road station through other routes, although its circular access road has been partially closed to make way for the new rail right-of-way. Access out of the station has been rerouted via nearby Pickering Place.

I recently read about renovations that are planned for Ottawa's main railway station. The upgrades will include elevated and weather protected (yes!) passenger platforms and the replacement of the canopies above the platforms and tracks. Interior renovations will be included as well as a canopy to connect the station to the O-Train station. 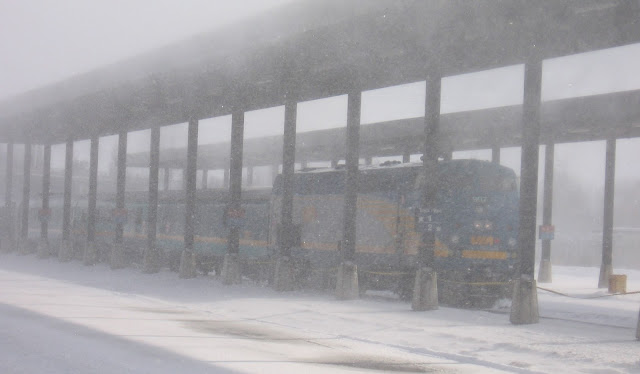 Say goodbye to these old canopies!

An interesting side note to the light rail connection to the Via Rail station is that the bus stop at the station, which is now known simply as "Train Station" will be changed to "Tremblay Station" when the light rail line is completed through the area. I guess people thought it might be confusing and redundant to have a light rail station called "Train."

Beachburg Sub  and Confessions of  Train Geek contributor Dave M. has started his own railway blog, Ottawa 589. I invite you to check it out. Also, stay tuned for a contribution from Dave that is upcoming on this blog.

I enjoy reading your blog. Since moving to Ottawa in 1992, much of the railway activity I first saw in this area is gone now.
The Via Rail line to Smiths Falls has more trains running today than it did in 1992.
My goal this summer is to catch that CN Freight to Kott Lumber and Twin Elm.
Here's a link to a video I took a few days ago at Twin Elm.
https://youtu.be/QPV1jlr_vsY

That's some pretty dramatic footage, David. Those Via corridor trains blast through Twin Elm and Moodie before slowing up before hitting Barrhaven. Getting the Sunday CN freight through Twin Elm can be tricky. I've only caught it there once. Your best bet is to wait for the 9:30 a.m. Via corridor train out of Fallowfield station (it hits Moodie anywhere between 925 and 935. CN 589 sometimes follows the Via train. The way to figure this out is to see if the lumber car has been picked up from Kott. If it hasn't, the chances are good that the CN freight is imminent after the Via corridor train.

(Sorry for the cell phone picture)

Thanks for the pics. I would imagine that they are removing those rails. I don't see any reason why the Capital Railway (O-Train) and the city, by extension, would need this track in place. They have already made it clear that this bridge is not in their plans.

It's weird. It's been a week and they've removed one small section and that's it...

I saw a worker cutting into another section of rails just under the transitway today. There's some sort of construction going on in the area right now so they could be removing some rails temporarily. They've done it before at the Prince Of Wales Bridge. You can see it here in 2007 http://maps.ottawa.ca/geoottawa/

Do you know if the city owns this lot? http://goo.gl/maps/vz4qx

The pile of rails sitting behind/next to Bayview yard is for the LRT, and the trackwork next to the O-Train station appears to be the creation of a construction access road from the back of this yard over to Bayview station.