Beachburg Sub readers are by now familiar with the photo contributions of my brother Marc, who lives in Sarnia. Recently, Marc and his children had the unique opportunity to take a tour of a small Sarnia short line railway's operations first hand. What follows is his account of this incredible behind-the-scenes look at a busy railway in action - Michael

Sometimes it’s not what you know, but who you know.

I’m a causal rail enthusiast, with a rekindled interest in the local Sarnia rail scene. As mentioned by Michael in previous posts, our family has a long rail history, going back three generations. My career took me into the aviation field, but my young son brought me back to watching trains. My son and I often take a break from the family’s weekend errands, and visit the Sarnia Via Rail station to watch the action in Sarnia Yard. We’re lucky to see so much on this busy line. Forgive my lack of proper terminology and my photography shortcomings…I’m not expert. I’m just a dad who likes to take his kids to see the trains. 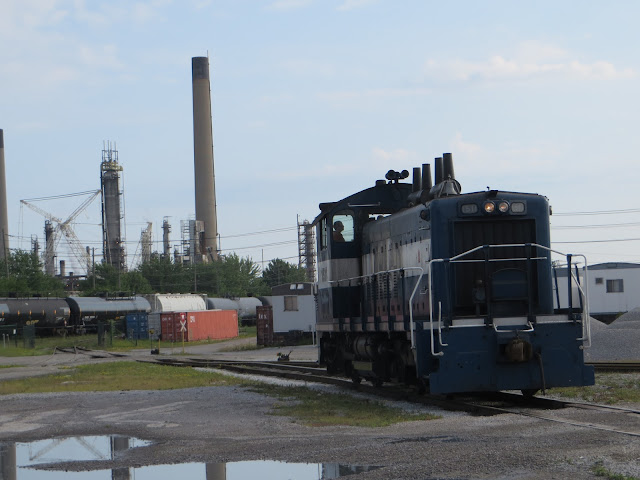 SW1200 1511 arriving to meet the kids with bell ringing! Background is Imperial Oil, one of Sarnia’s biggest refineries. I like the silhouette of the engineer shown here.


A family friend knew my son was obsessed about trains, and she kindly offered to arrange a tour of her company’s facility: Sarnia’s little known, but very busy short line railroad: VidalStreet Industrial Park Inc. (VIP). 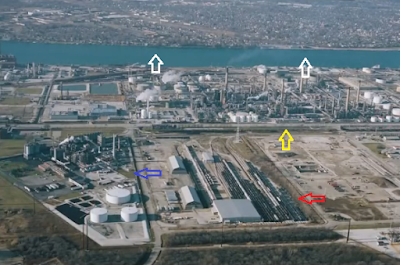 Arial view looking west at the VIP site. Note the rail storage yard, bottom center (red arrow) Part of the Lanxess and Cabot site to the left (blue arrow). Imperial Oil above and to the left of VIP (yellow arrow), along with a few smaller refineries. St. Clair River (and Michigan) shown above Imperial (white arrows).


VIP operates on the former Fibreglass Canada site in Sarnia’s Chemical Valley. Fibreglass closed its doors in 1991, leaving 600 people out of work, and an abandoned 30-acre site. I remember it being a huge loss for Sarnia at the time. A group of Sarnia businessmen bought the site in 2005 and started the VIP short line railway. 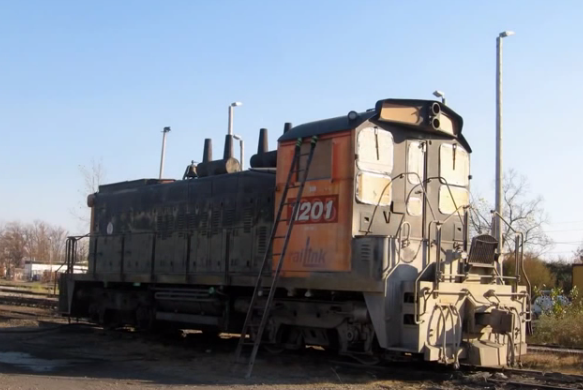 1201 being refurbished. It was a former CN unit. Photo from VIP. Switcher No. 1007 is also in the fleet, a former Dow Chemical unit. Dow operated a large site in Sarnia for many years on the CSX Sarnia Subdivision.


VIP has three SW1200 engines: 1007, 1201 and 1511. They have three spurs: one servicing Imperial Oil, one connected to the Canadian National yard, and one servicing Cabot Carbon and Lanxess to the south. They are not connected to CSX’s lines, but are able to service these customers through the CSX/CN interchanges. 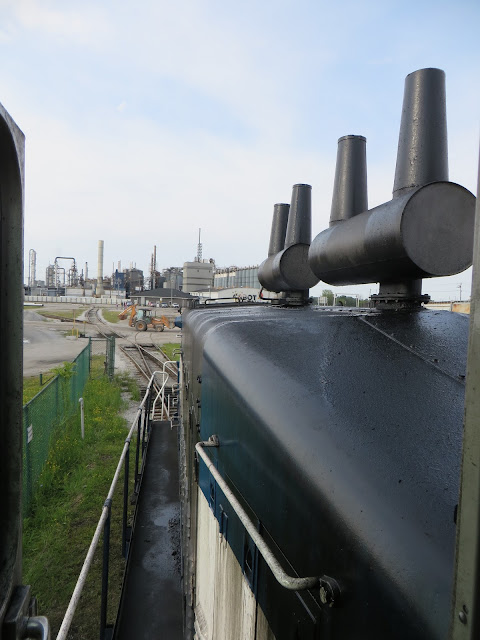 Riding in the cab of 1511, looking South towards Lanxess and Cabot Carbon. Servicing Cabot is a dirty job, as shown on top of the cab. Carbon-black dust from hopper loading makes for dirty engines. My son commented: “Daddy, the engine needs to go to the wash-down!”


VIP services local industry in several ways: They took over much of the shunting from CN: assembling, storing, and delivering consists in and out the CN yard. They have a large storage yard, holding 700 cars. They also offer trucking, warehouse and transload services. Cabot and Lanxess do not have much rail storage available on site, and use VIP to hold, deliver, and retrieve empty cars on a daily basis. 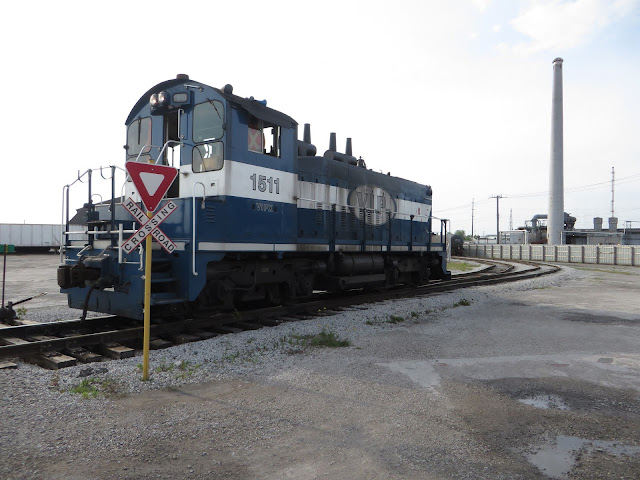 Ready for our ride! Lanxess site in the background. Among many other products, Lanxess is the world’s sole producer of food-grade butyl rubber, used for chewing gum. Check out the old crossbucks!


It was a great morning to see the Chemical Valley from behind the scenes. Our tour started at Kenny Street in Sarnia, continuing though VIP’s yard, through a section of Imperial Oil, and past the St. Andrew St. level crossing. We stopped short of the CN yard, and headed back. The train’s horn startled the kids! 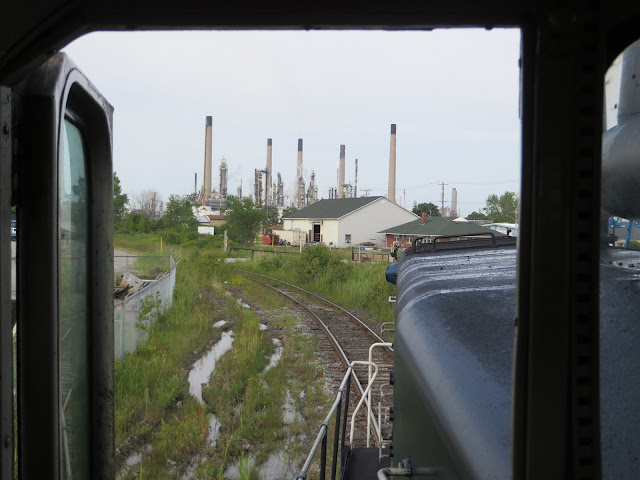 Looking north along the swampy line. Heavy rain has flooded many areas. 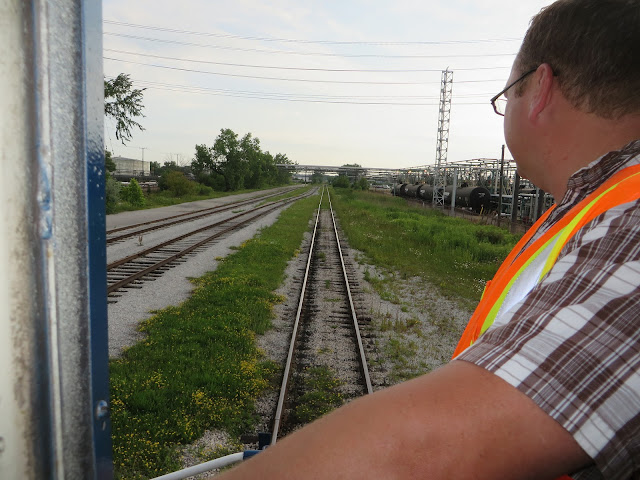 
It was a short tour, but a great experience for all of us. I haven’t been on an engine since I was a kid, when a friendly CP engineer in Banff took time from his break and let me and Michael come see inside the engine. (It was an SD40-2 towing a disabled Via F unit - Michael) 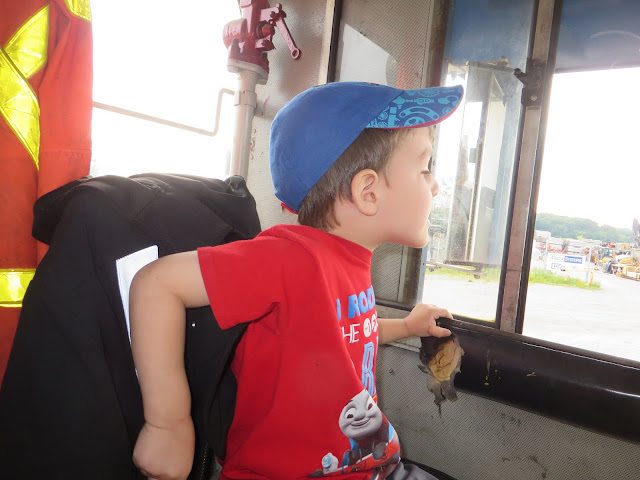 My three year old was excited beyond belief. We are lucky to have a friend who went the extra mile for us.

Thanks to my brother Marc for contributing this first-hand account of the VIP operations in Sarnia. Please feel free to leave a comment to let him know what you think.
Posted by Michael at Wednesday, July 08, 2015

Great post and I'm glad your family was able to experience trains first-hand.