CN's St. Clair River Industrial Spur is a rail line with a strange name. It stretches from Sarnia south all the way to the Courtright area, a distance of 23 kilometres, or 14.2 miles. CN and CSX (via operating rights) move 450 cars a day in and out of a number of refineries in Lambton County. The line sees four CN trains and two CSX trains every day. Major customers include Nova Chemicals (Corunna and Moore sites), Imperial Oil and Terra International, among others. The railways carry plastics, ethylene, polyethylene, butane, ammonium nitrate, nitric acid, methanol as well as other raw materials.

The word "spur" seems out of place for such a long right-of-way with a fairly busy schedule. Over the Christmas holidays, I was able to get some photos of one the line's major customers, Nova Chemicals' Corunna site (formerly known as Petrosar). This refinery, pictured on Christmas Day, was built in 1977 and accounts for a large portion of CN's consists on a daily basis.

This shot below shows an overview of the refinery, as seen from an overpass on Highway 40. The highway was completely empty on Christmas morning, which allowed me to pull over and take these shots before I continued on to my sister's house for a visit. Getting these shots would be very tough at any other time since there is no place to pull over here and photograph this operation. 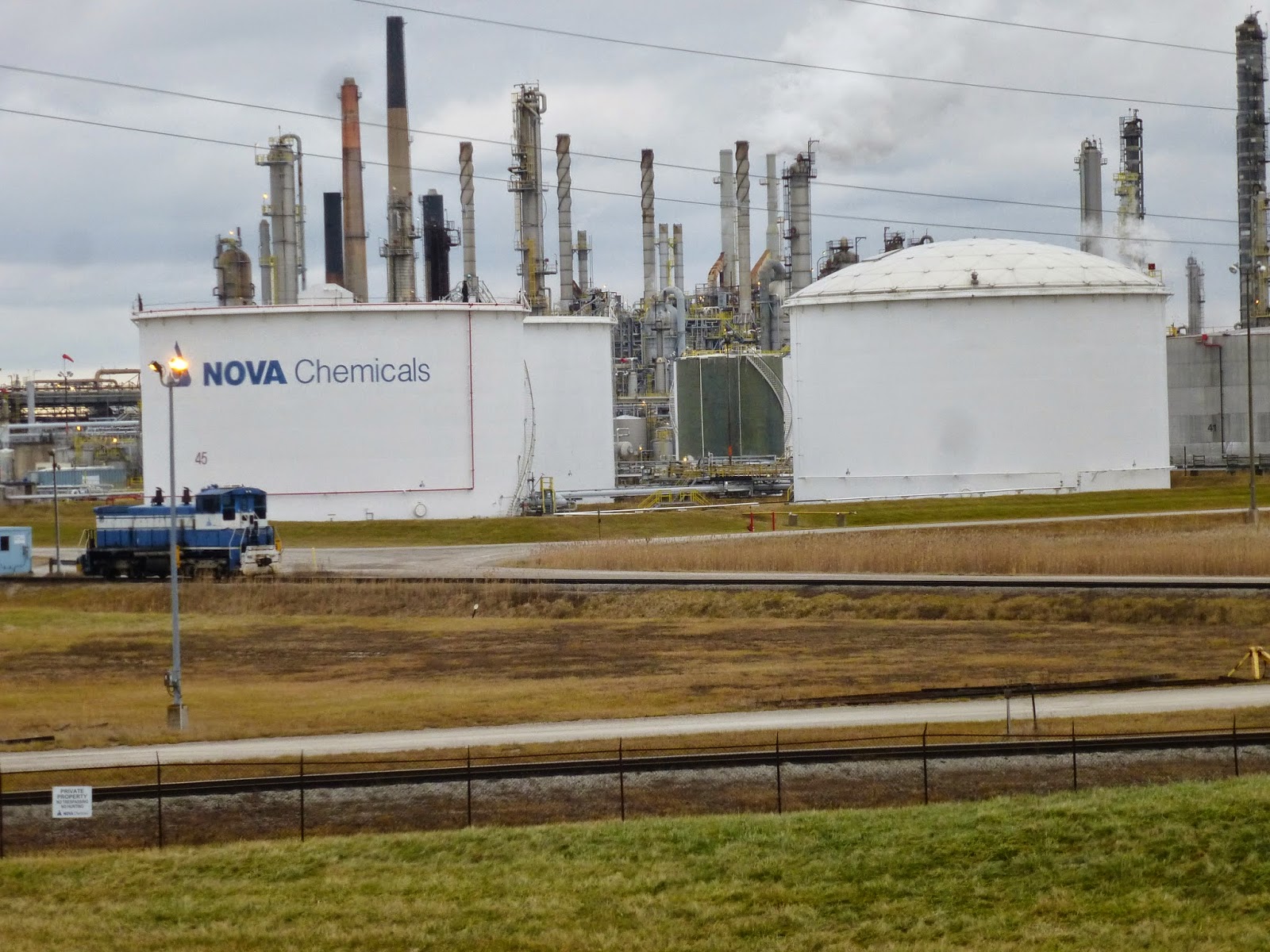 You will notice from the top photo and the one below that Nova performs its own switching duties, with the help of the old warhorse switcher you see below. Also, check out the ancient tank car on the wye (below).

The refinery is actually a fair way from the CN St. Clair spur, but is accessible via a long turnout that branches off east from the spur and leads to a large rail yard before proceeding below the highway onto the refinery's site. 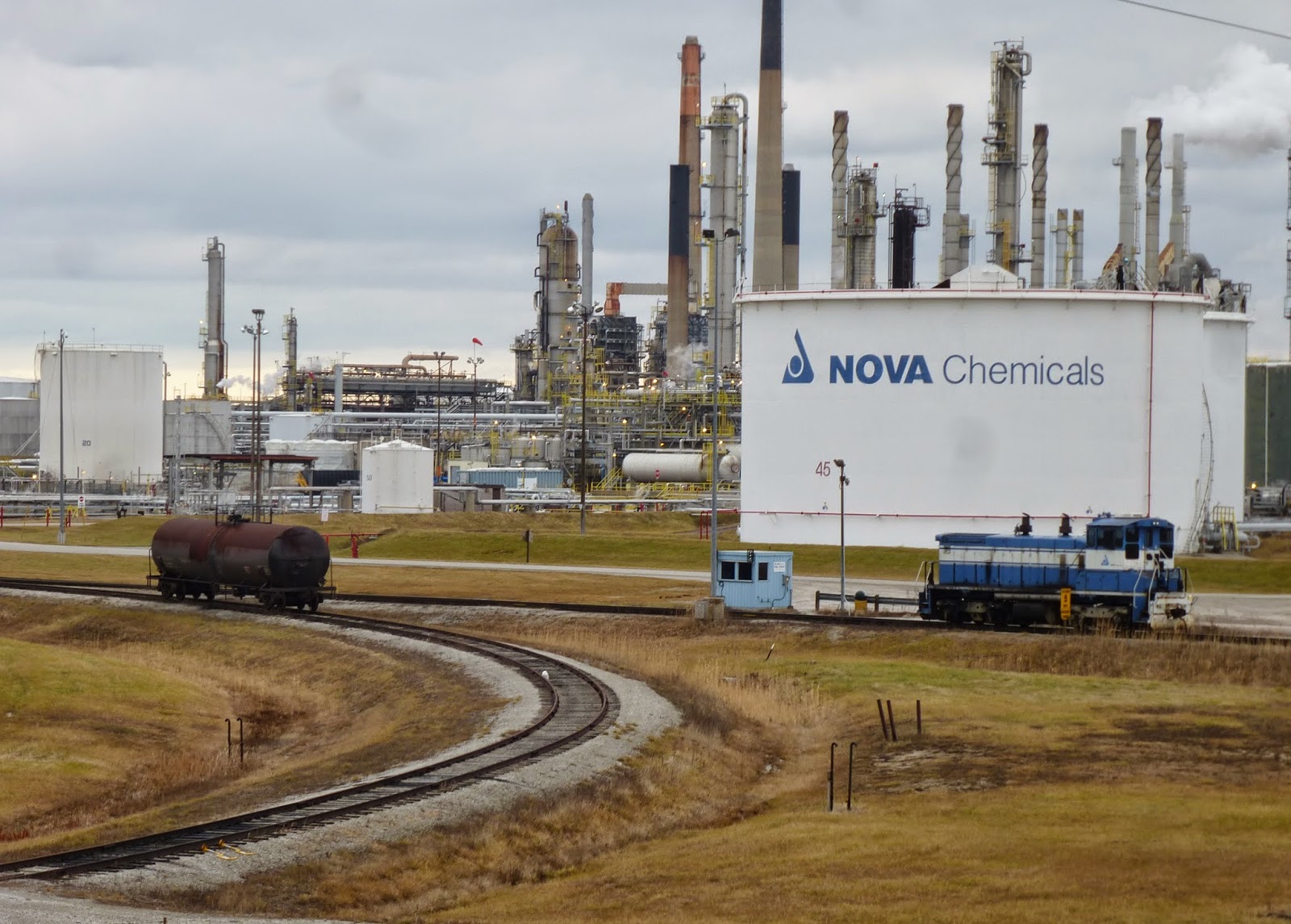 Here's a better shot (below) of the old switcher. I have not been able to determine what this is. (see comments below for answer) I would say it's a modified Electro-Motive (GM Diesel) SW model, but the unit doesn't have any numbers on it, so I'm not sure what it is. The refinery formerly used NCLX 2003 locomotive on its tiny railway, which I have shot before.

You will notice the sign beside the locomotive that advises all operators that the speed limit is 5 m/ph beyond the wye. The refinery produces 1.8 billion pounds of ethylene per year and another two billion pounds of related products, so the speed limit is probably a good idea. Ethylene has a number of uses in the chemical industry (think of the many uses of ethylene glycol) and is a key component in products used in agriculture to hasten the ripening of fruit. 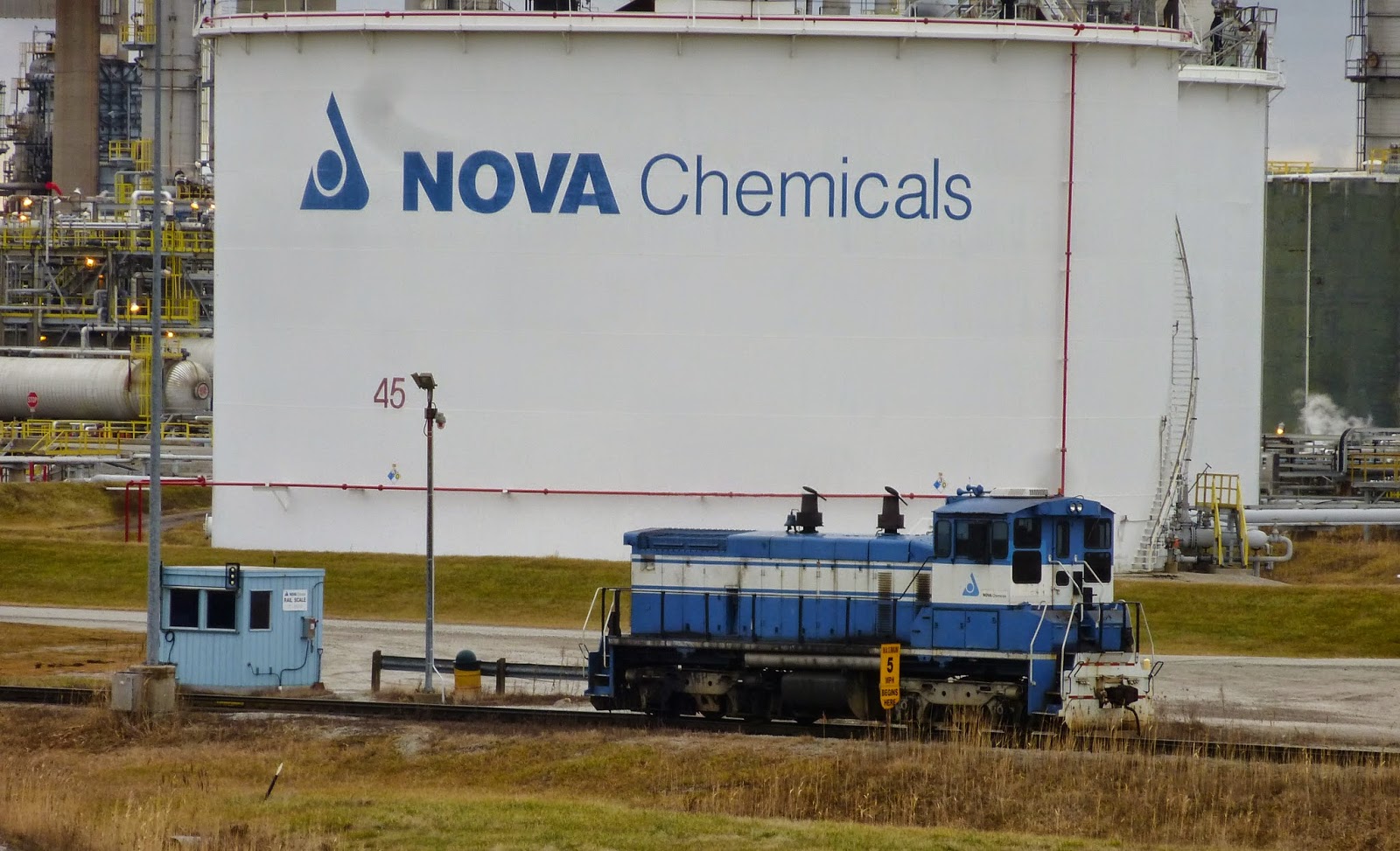 This switching operation is pretty constant most days, given the number of cars that need to be delivered to the plant and shipped out to Nova's other area plants. The Corunna site feeds the Nova Moore and Nova St. Clair sites, which means this little railway is a busy one. 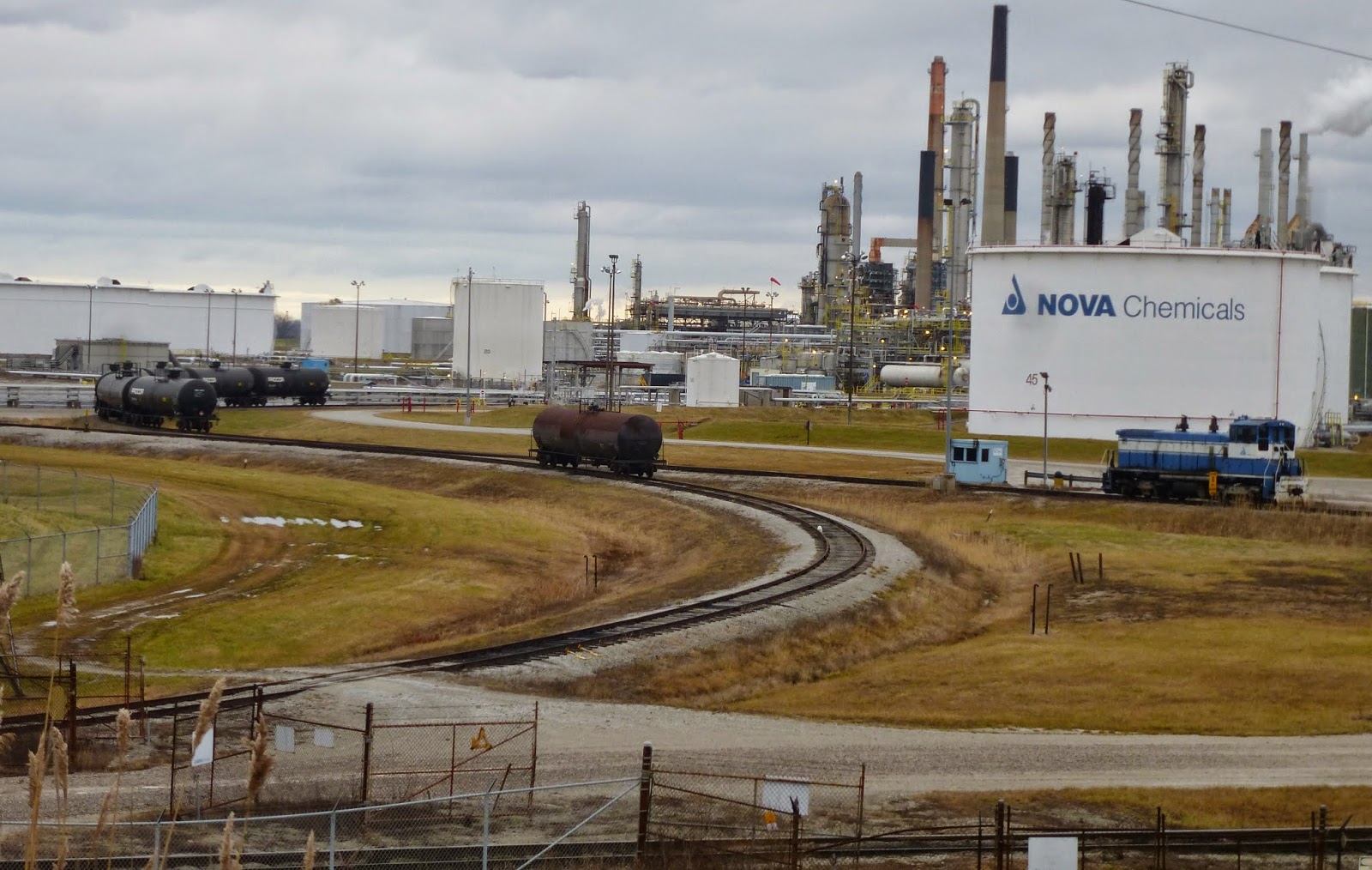 On the other side of the highway, you will find this rail yard, which leads to the CN St. Clair River Industrial Spur. Again on most days, this is a busy spot. However, given that I was passing by on Christmas Day, everything was quiet. 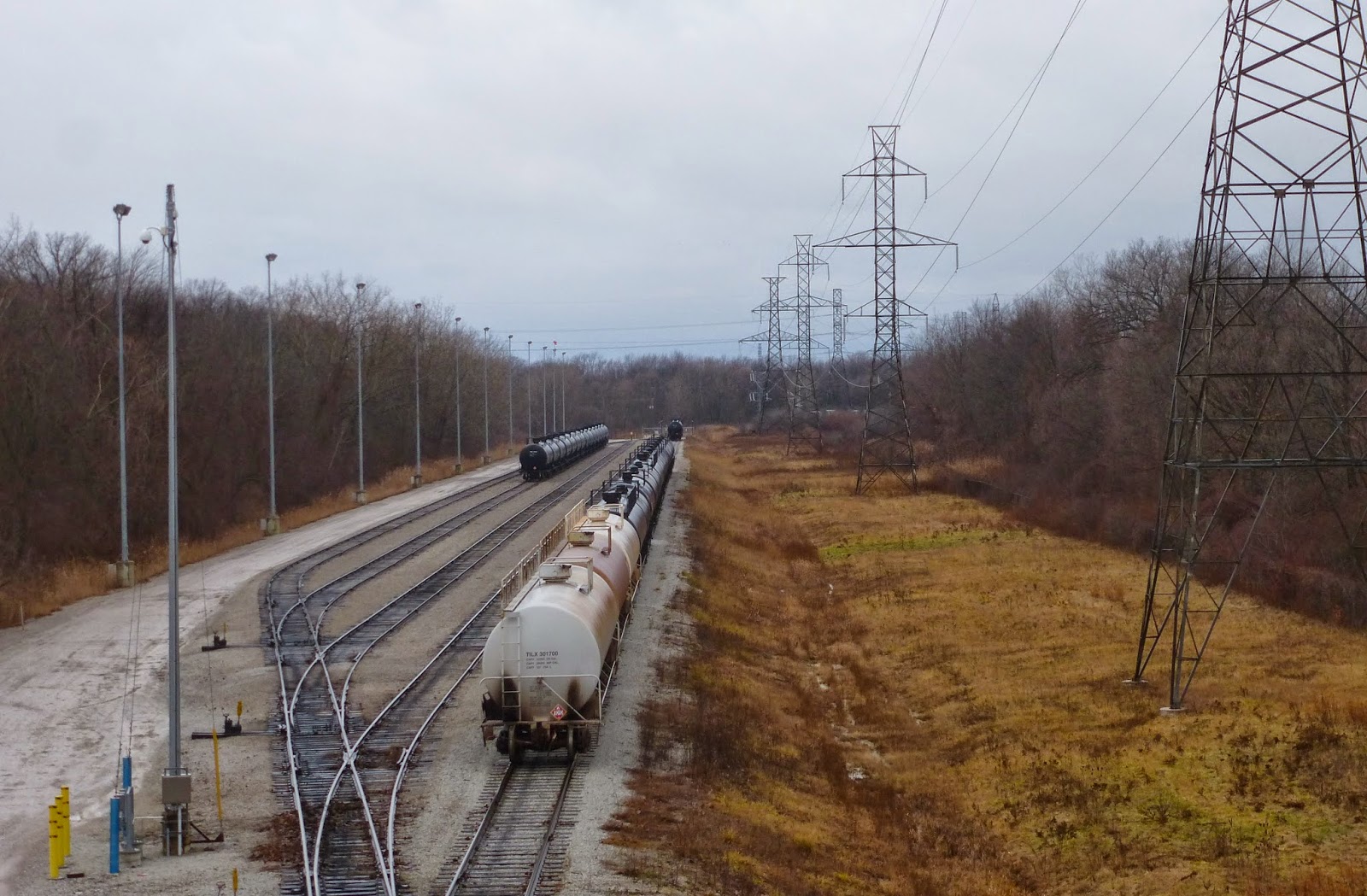 When watching trains in this area, it's common to find cars lettered for Nova. The company has a number of cars lettered NCIX and NCLX. You will recall from an earlier past post that Nova inherited these colourful cars when it purchased local DuPont operations, also in Corunna.

I was glad to get some shots of this operation, even if it was on a day when nothing was happening.

I was only in Sarnia once, for a cyber security conference, and I didn't have any opportunity to railfan. I wish I had been able to!

Thanks for that info Steve. That's why I put the question out there. Someone always knows! If you ever find yourself in the area again, take the time to railfan. You will not be disappointed.

Thanks for sharing these, Michael. As the 'year of posting the ordinary' on Trackside Treasure, it's important to remember that though they're relatively recent, such industrial operations don't stay the same forever. Great to document the arrangement of industry, track, locomotive and typical rolling stock in this post.

Thanks for your comments, Eric. I am glad I crossed this operation off my list.