Sometimes when I'm out looking for interesting railway photos, I tend to forget that the train itself doesn't always have to be the star attraction of a photo. Sometimes, it's the finer details that make photos interesting. I was reminded of this the recently when I read this post in Steve Boyko's blog, Confessions of a Train Geek.

The first shot could best be described as disappointment. This shot was one of the first I took at an empty Walkley Yard in Ottawa on the Civic Holiday weekend in August 2013. I revisited this shot and realized it actually tells a great deal. It tells the story of Ottawa's railway business right now. Granted, the rail yard is rarely this empty, but it's often a ghost town. You can see the one engine assigned to Ottawa in the left side of the shot and a tiny piece of an O-Train trainset peaking from behind the hopper and lumber car. 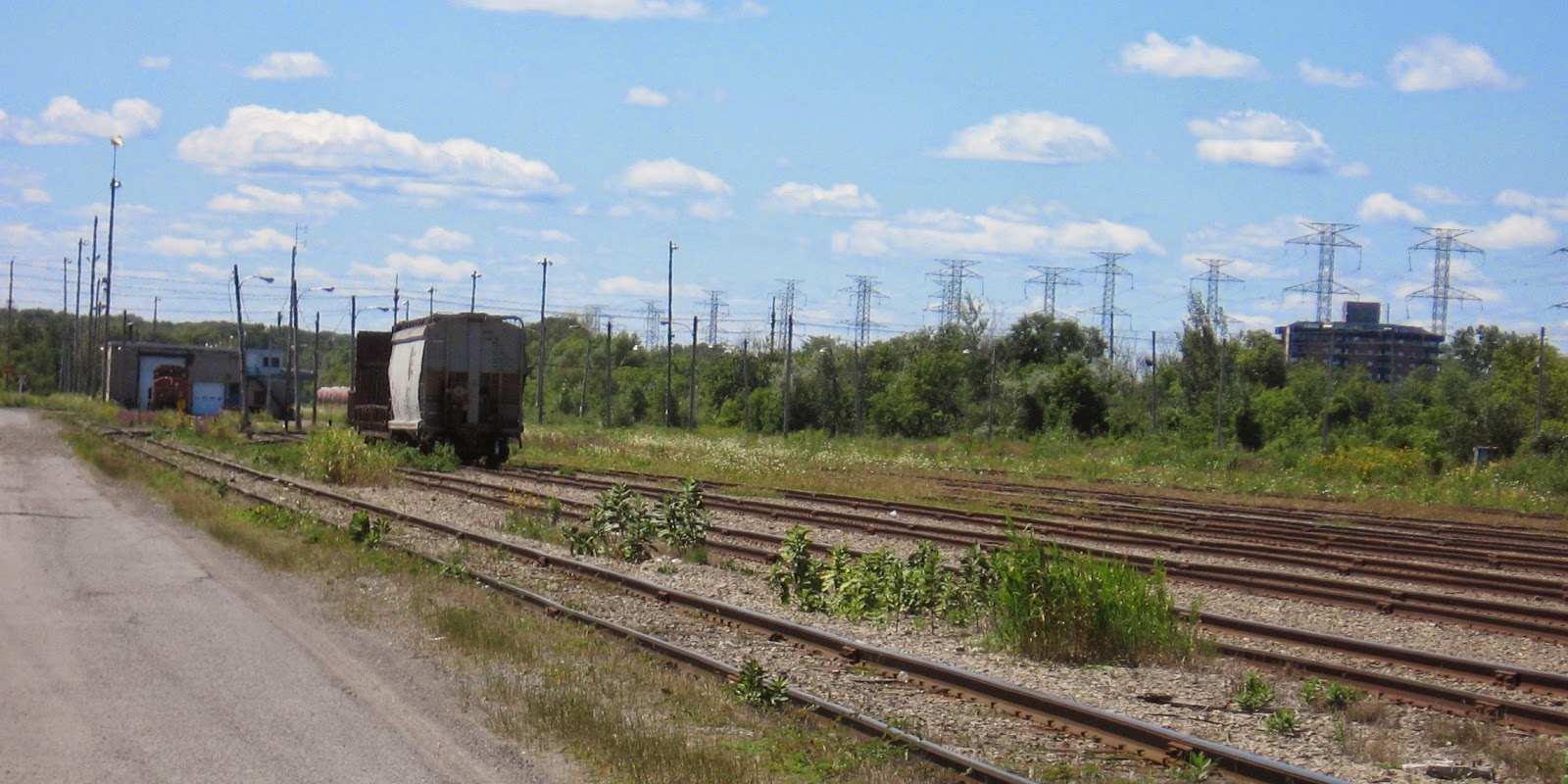 This next shot is another that, at first glance, doesn't really show much, but it struck me the other day that it actually tells a fair bit. This is the CN bridge over Highway 416. I took this shot on New Year's Day this year, as part of an effort to get some file shots of local rail infrastructure, including bridges in Bells Corners. What struck me about this image isn't that this section of the Beachburg Sub was double tracked at one point, but that the track was removed and the ties left in place for some reason. I chalk it up to the fact that these ties are old and likely worthless, but it still makes me wonder. This is another image that tells the sobering story of Ottawa's rail infrastructure these days. 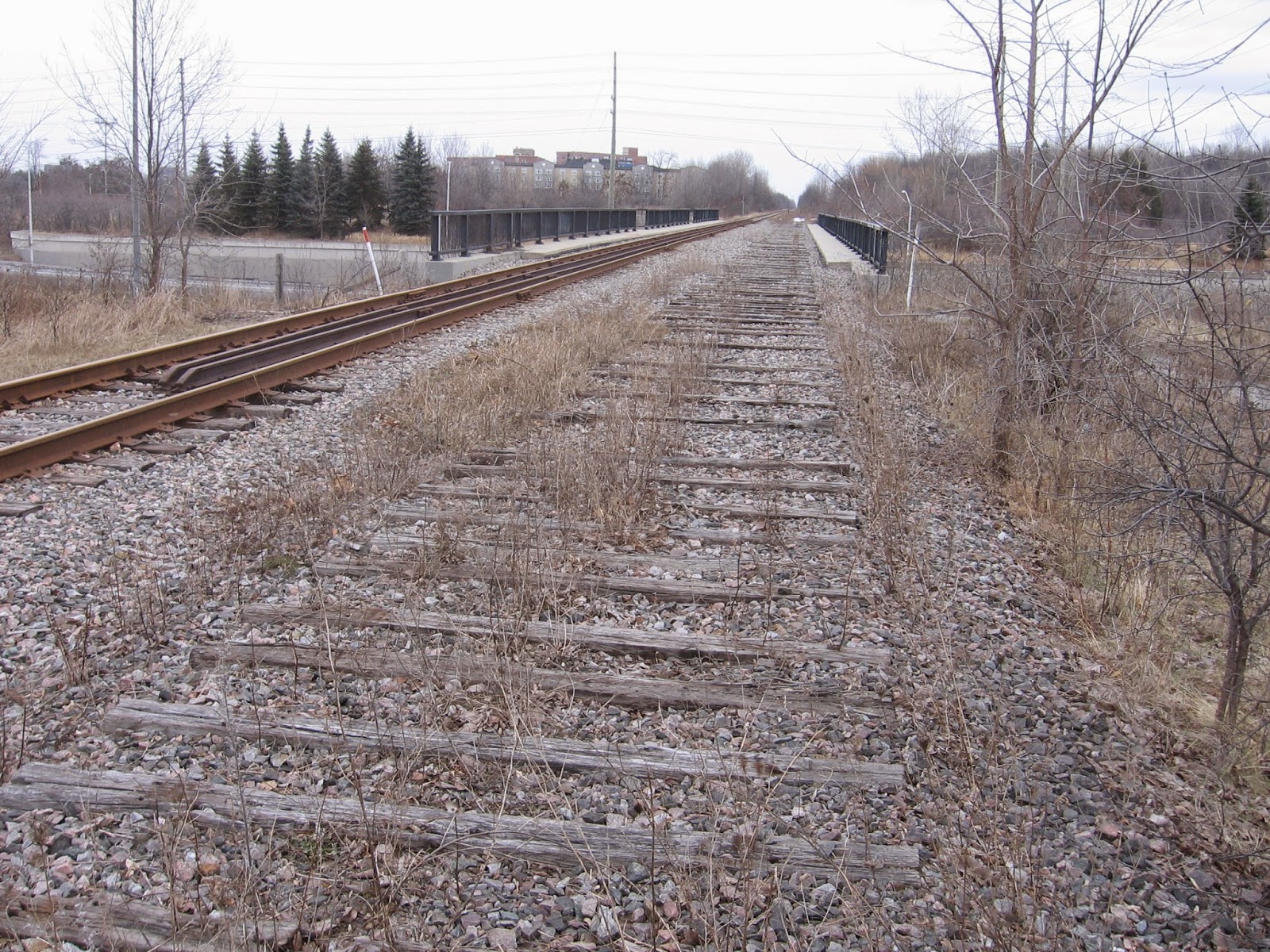 This shot below, taken May 13, 2013, was one of the first I took for this blog when I began taking shots of trains again. I love taking shots of Via's old silver and blues, but what I like about this shot is that the car's position allows you to see straight through to a station sign on the other side of the track. I do recall seeing the sign through the vestibule door and deliberately trying to capture it. The fact that the sign is hanging a little off kilter says something about Ottawa. But I'm a cynic, so maybe it's just me. 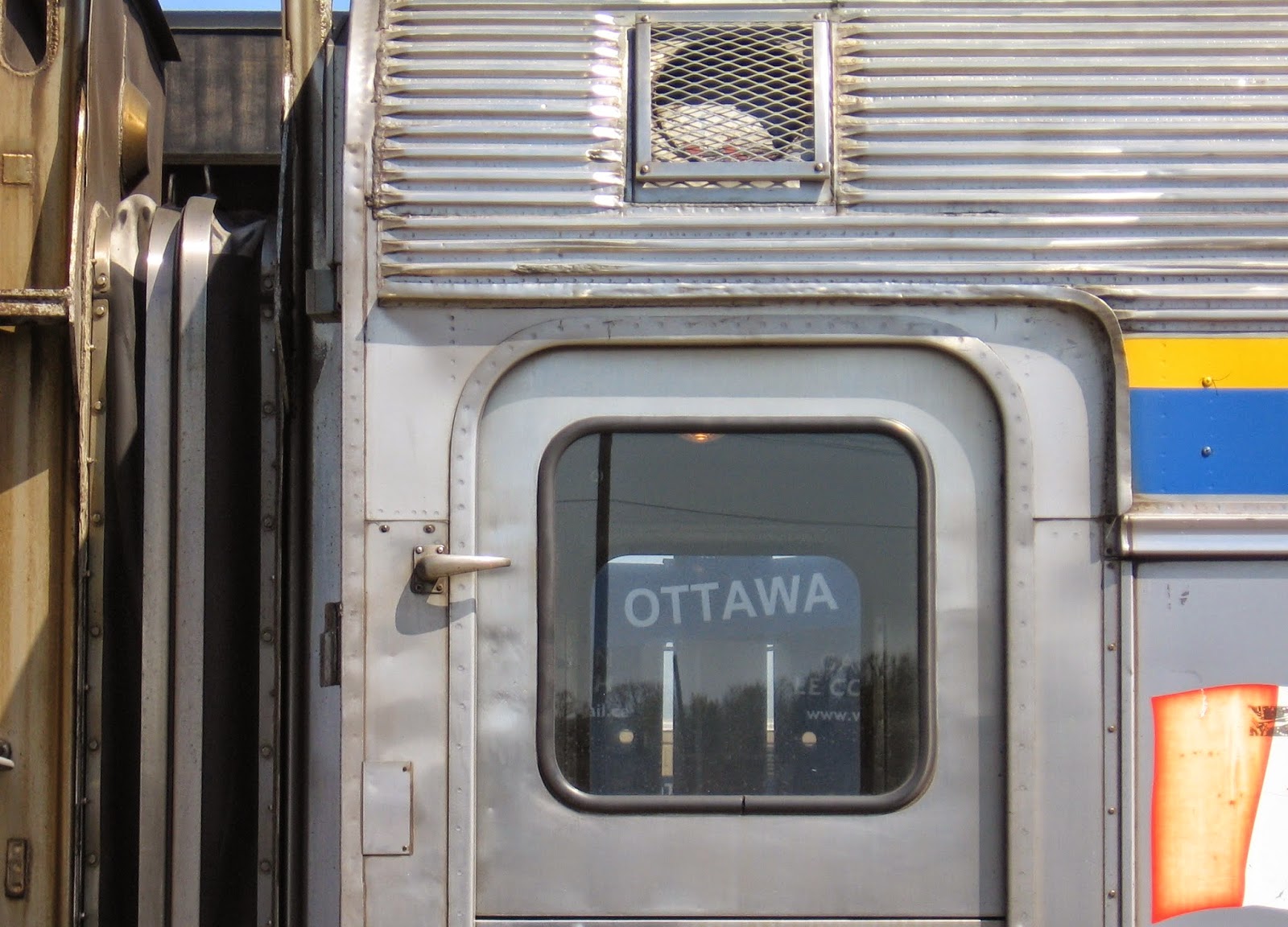 This shot below, taken October 6, 2013, is a shot of CN's hideous Millennium caboose in Walkley Yard. I've taken shots of this monstrosity before, but this time, I tried to focus in on some details, like the boarded up windows. But the real star of the show in this shot is the rain. It was a gloomy, lonely day in Walkley Yard. 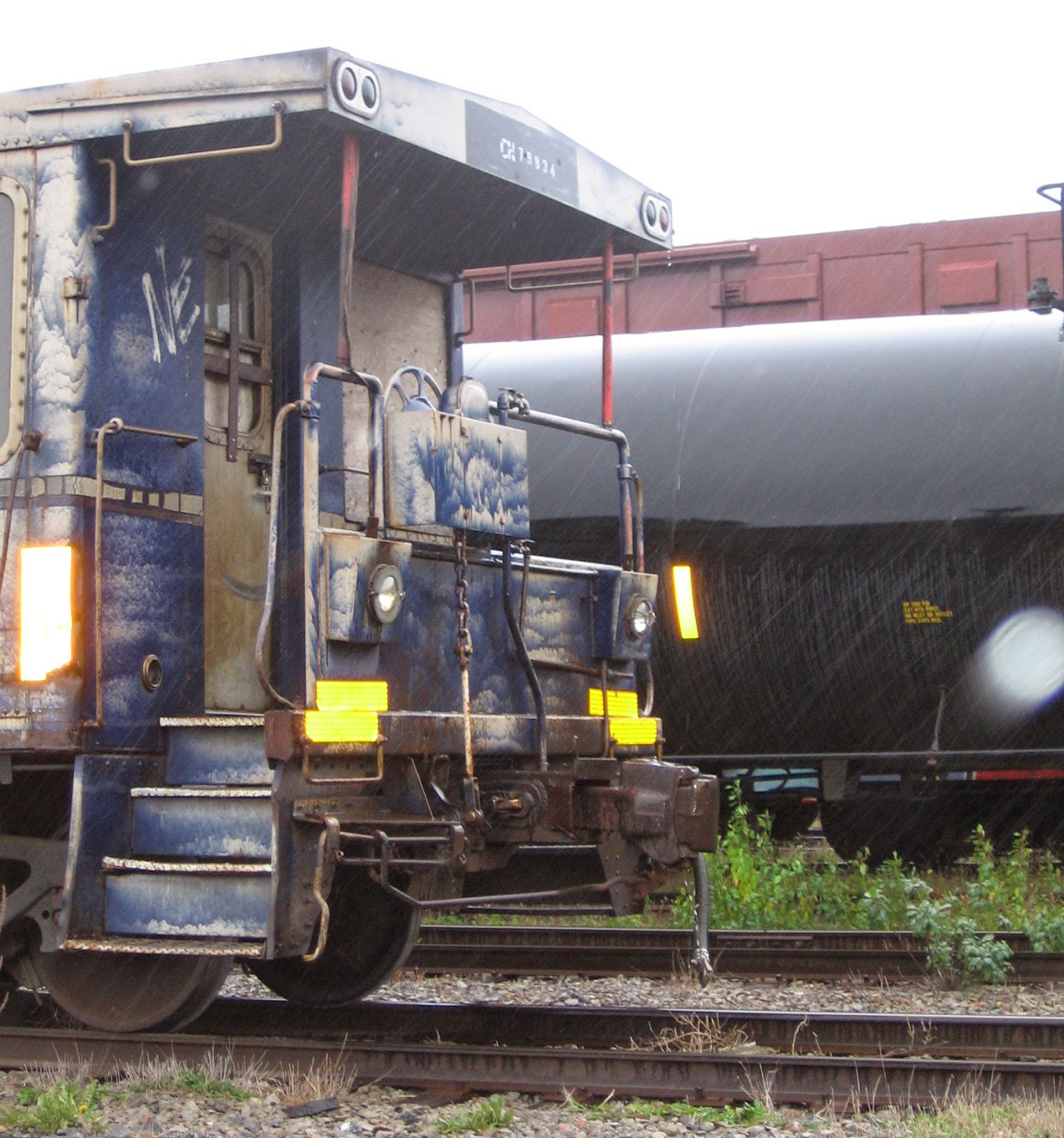 This shot below really isn't special, which is why I haven't used it until now. But I thought it fit the theme of the post. I think the colours and the lines really tells the story of big time railroading today. This shot, taken August 10, 2013, was taken on the Woodbine Drive overpass in Markham, Ont. This container train stopped to allow another one to pass. You can also see the part of the GTA skyline in the distance. 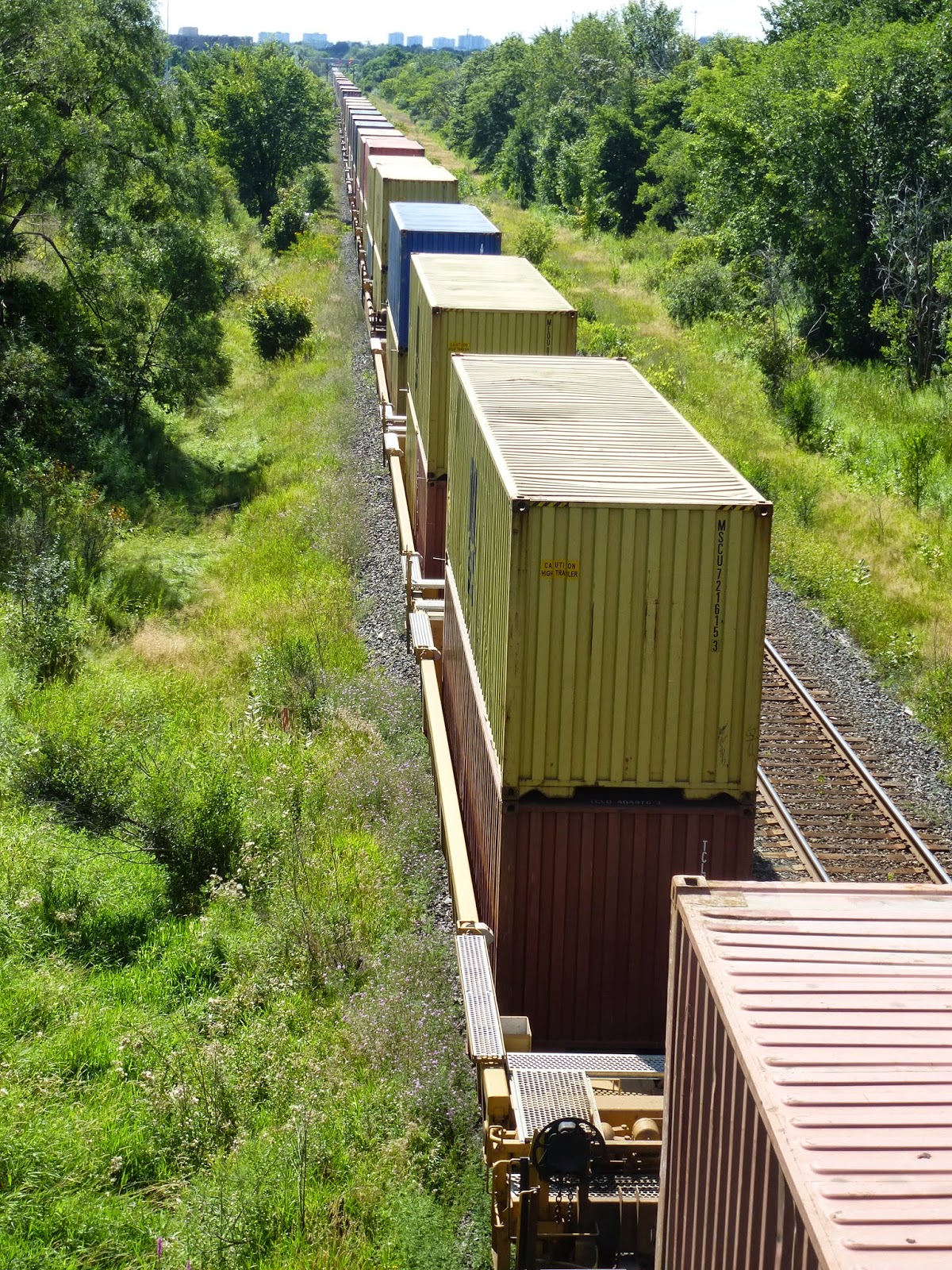 The image below was one of many I shot when I happened across Sarnia's preserved steam locomotive in Centennial Park on December 23, 2013. No. 6069 has been undergoing an extensive refurbishment by dedicated local volunteers in the past few years and the progress shows through in the small details, like the old CNR maple leaf logo. I had a few detail photos of this locomotive that I wanted to share, but I thought the logo was the most vibrant. 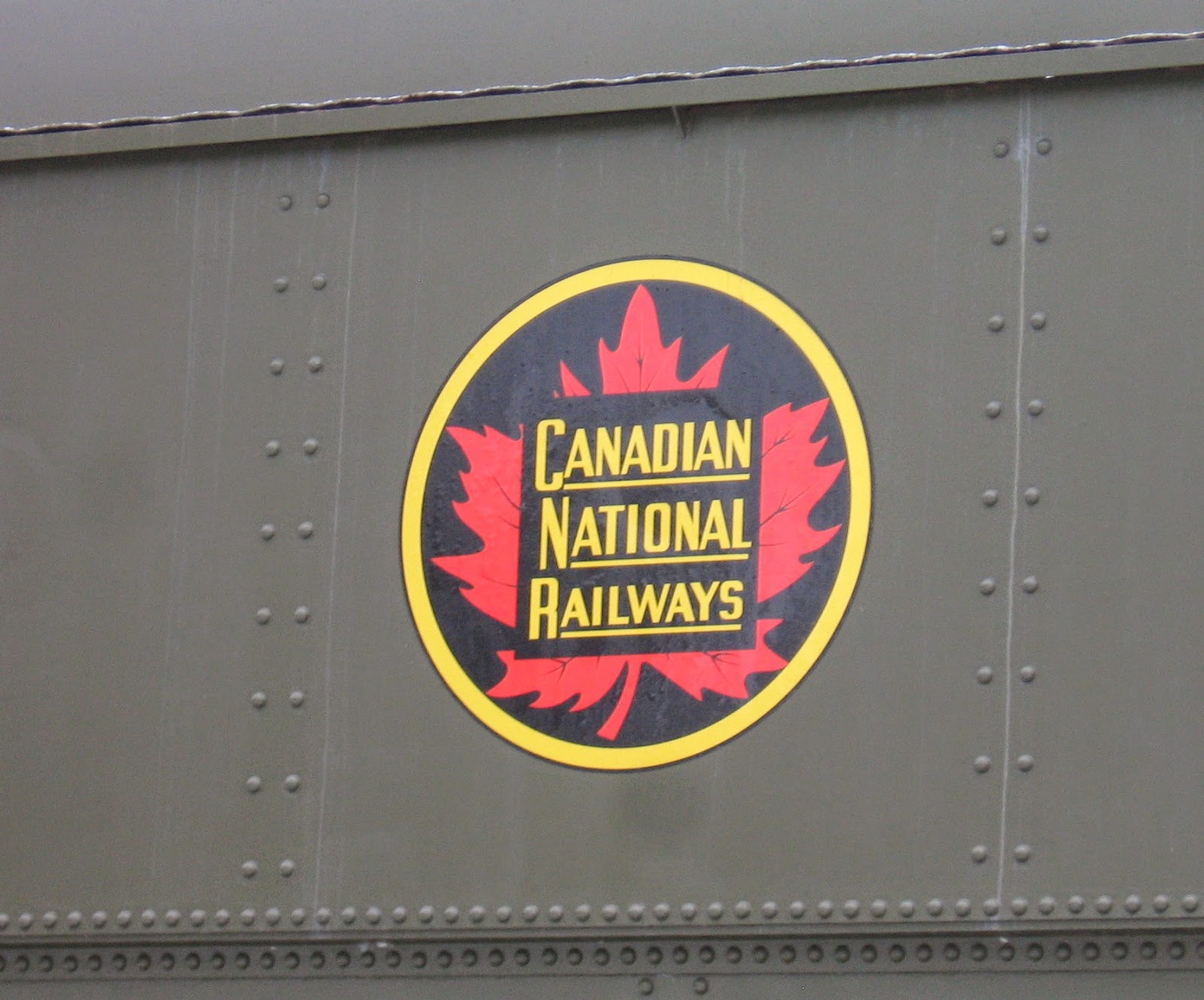 One final shot. As I mentioned above, you don't need a giant train perfectly framed at an ideal spot to have a great railway photo. This shot below is another I like, but for reasons other than the train. I shot this photo on December 18, 2014, at Sarnia's rail yard. Looking at the shot, I think the train shot is fine, but I like prominence of the track and the turnout in the foreground. I also like that you can see pieces of the Chemical Valley peaking through the trees. It's an interesting mix of the environment and industry. You will also notice an old cement piling in front of the lead engine on this small consist. I'm not sure what it was, but it adds another interesting element. 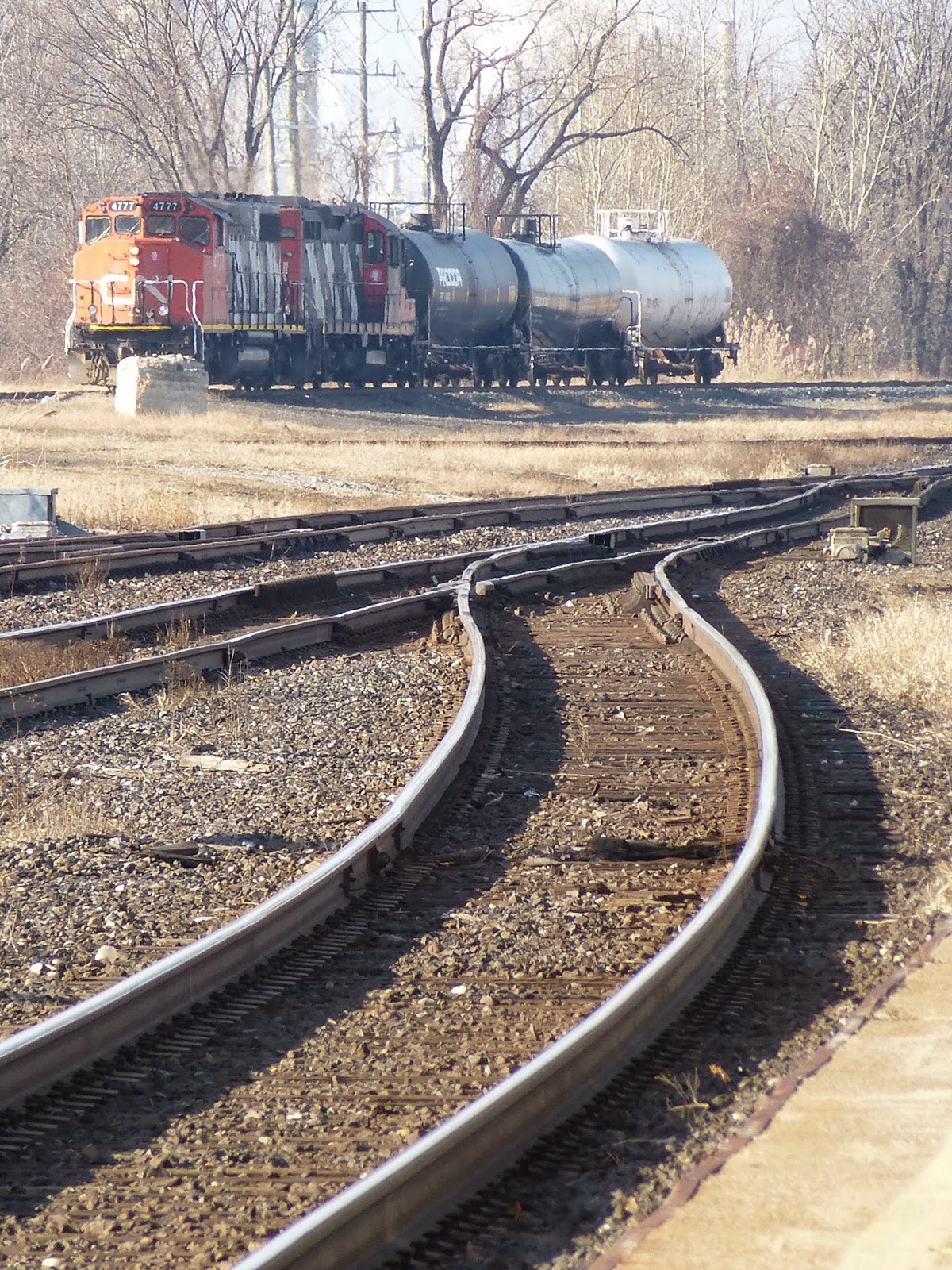 I would never claim to be a good photographer. I am still learning the techniques and tricks of the trade from other more seasoned shooters. But I hope this small collection at least highlights the importance of occasionally mixing up your routine when trackside. The results might not be immediately obvious, but you'll thank yourself later.﻿
Posted by Michael at Thursday, February 12, 2015

I like the details in these photos. The yard and bridge photos are great reference photos, and I like the framing of the Ottawa sign. My favourite is the Geep photo with the leading lines of the rails... very nice!

Interesting post, Michael. Some thought-provoking shots. Your header photo of the VIA train under the overpasses reveals some interesting details, even in the graffiti!

Thanks for the comments gents. Steve - I was looking for a proper name for the photos like the one of the empty Walkley Yard. I think well go with reference shots. Eric - I will have an upcoming post explaining that header shot. It was the result of a happy accident.

Like the VIA shot, with the Ottawa sign through the window. And yes, the sign being slightly out of whack really adds character to the shot.