The other day, my brother emailed me to tell me he took his son to the train yard in Sarnia for a few minutes as he was running errands. My nephew, not even three years old yet, is already a big train fan and is into Thomas the Tank Engine. My brother was kind enough to take a few shots of the trains he and his son were watching (I will share those in a future post). I mention this because it started me thinking of my father. My dad often used to take photos of trains for me. I have some great 1990s shots of the Goderich Exeter Railway, thanks to my dad.

I think, deep down, my dad is like me in that he likes the big machines. That is why I wasn't surprised when my brother emailed me this photo he found in the family archives recently. I had never seen this photo before. In fact, I didn't even know it existed until my brother sent it to me. Initially, my only solid conclusion about this photo was that my dad took it. I was glad to add this image to my collection, but it made me wonder where this was taken and when. 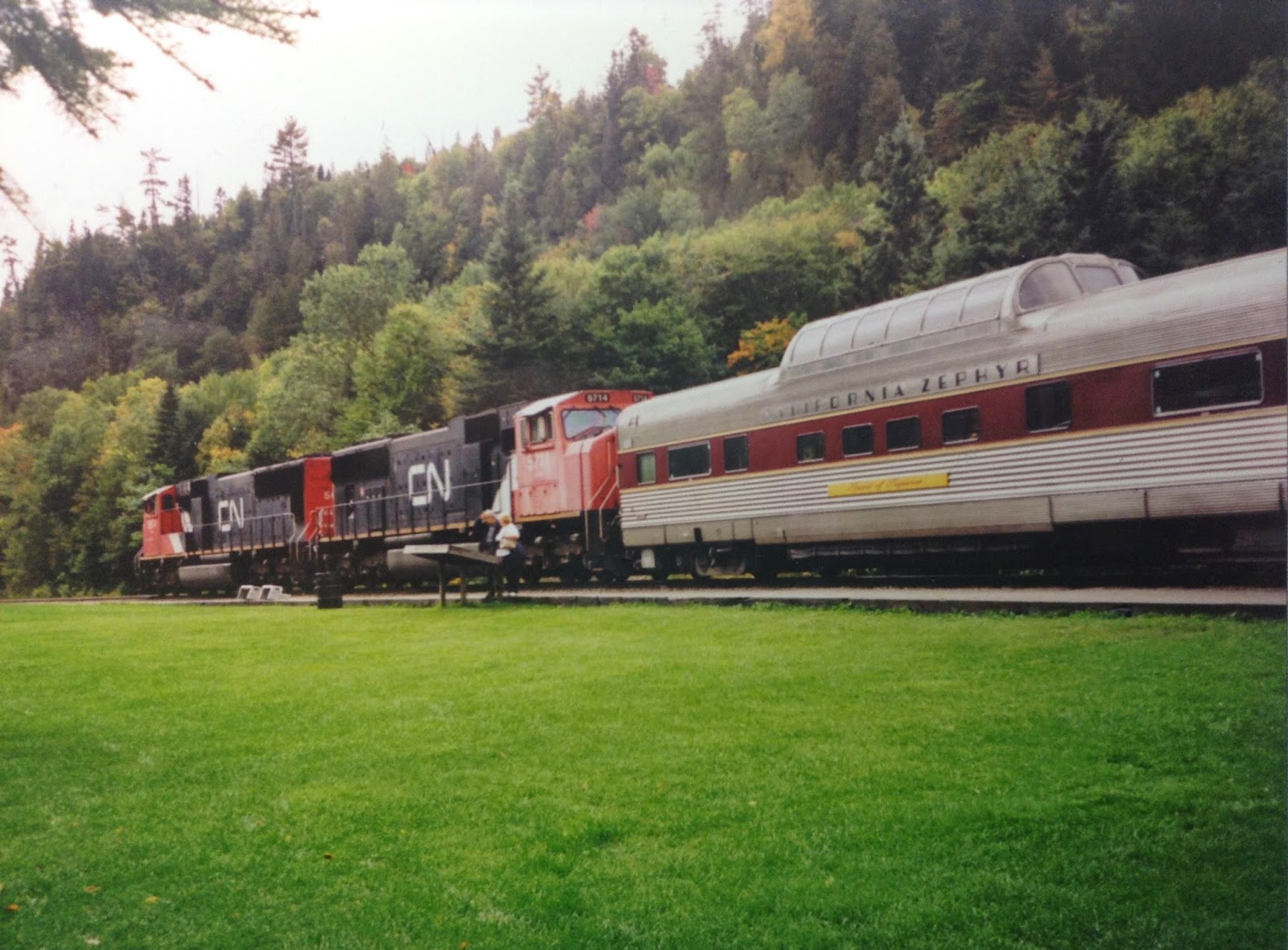 This is what I initially managed to figure out about this photo.
1. This is an Algoma Central Railway train, since CN took over the railway in 2001 as part of the Wisconsin Central purchase. That would mean this photo was taken post-2001.
2. The units leading this train, including CN 5714, are SD75Is, judging by other photos I found of 5714. However, the 2011 shot I found shows 5714 has been repainted at some point since this photo was taken.
3. The dome car following the locomotives is ex-Western Pacific 813, Silver Palace. This was one of the Budd-built streamliners of a similar vintage to Via's silver and blue cars. The car was purchased in 1999 by ACR's parent company. This site suggests the car, now called Spirit of Superior, retained its California Zephyr paint scheme until at least 2004, which clouds the timeframe a bit. Looking at the information available online, this car doesn't seem to have a number, as it is usually referred to by its former number.
4. Given that these units are pulling a dome car, it's a safe guess to say this train is the Agawa Canyon Tour train. I figured it was taken at the end of the line, at the canyon.
5. You can see two passengers reading a tourist sign in front of the engines, which would suggest it was taken in the canyon.
Earlier this week, I was able to solve the mystery behind this photo when my Dad confirmed to me that he did indeed ride the Agawa Canyon tourist train in the early 2000s, although he wasn't able to pinpoint exactly when.
Also, later on in the week, my sister sent along some photos she took when her family rode the same train on Aug. 15 this summer. Note the similarities between the two photos. 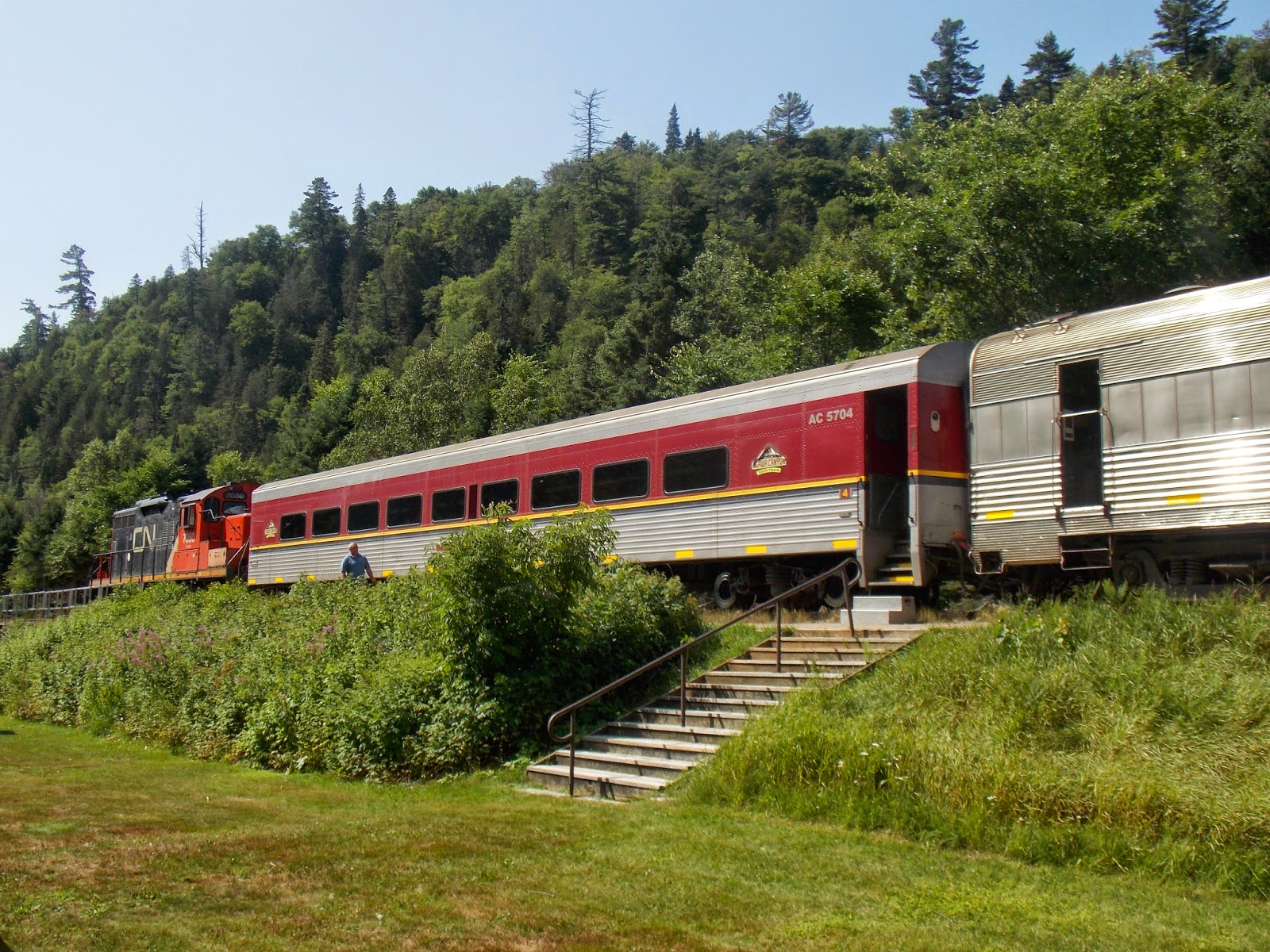 The only question that remains is when was the first photo taken. I place the timeline between 2001-2005. It depends on when the old Zephyr cars were repainted in ACR colours. Anyone out there know the answer?
Posted by Michael at Wednesday, November 26, 2014

Great detective work! I hope you can narrow the time down further.

Thanks, Steve. I think I might have stumped the readers.

Those repainted cars aren't the same ones as your previous pics. They're the former Ski Train cars that were purchased a few years ago (I believe they arrived around 2007-08, but don't quote me). I'm not certain of the disposition of the domes, but I know for sure they were used until at least late 2004 (when my parents rode the tour train). By that time they were using gp40-2w's for power.

I rode the tour train last September, and it consisted of 6 of the ex-ski train cars, one of the Budd coaches that was purchased in a deal with the government, and an ACF diner with an F40 on each end. As a note, the ski train cars were originally CN Rapido cars.

Thanks for your comment, Walker. Just to be clear, I wasn't drawing any comparison between the Zephyr car and the cars in the second photo. I was only pointing out the similarity between the natural backdrop of the canyon in both shots. But thanks for the info regarding the former ski train cars.

I think you've probably identified the date as closely as you can without specific information of when he made the trip.

The dome car "Spirit of Superior" has been correctly identified. It was acquired in 1999 and the maroon paint across the window area of the car essentially is its WC/AC colours. The "California Zephyr" lettering at the top never got painted over for whatever reason. I photographed it in the same condition in 2004. I'm not quite sure what year exactly they stopped using the domes on the train, but it would have been before the ex-Ski Train cars were acquired in 2009.