The curious case of the Prince of Wales Bridge

On my recent trip aboard the O-Train, I noticed that Ottawa's Capital Railway at Bayview no longer connects to the former CP trackage that leads to the Prince of Wales Bridge. Instead, the old CP tracks have been buried by ballast, thus severing their connection to the Capital Railway. These tracks, it should be noted, pass through the old City of Hull along the old Maniwaki Sub. This sub is still technically intact to Wakefield, since it is the home of the Hull-Chelsea-Wakefield Steam Train. This tourist train, it should be noted, is in all likelihood a lost cause since storm damage to the line is too expensive for local governments, who own the line, to fix.

But getting back to Ottawa, I was a little surprised by the disconnection at Bayview, although it sadly makes sense given Ottawa's utter lack of vision when it comes to its railway infrastructure. I wandered over to the end of the Capital Railway the other day to take a few shots. Here's a shot below of the buried connection (almost dead centre) taken from the Somerset Street overpass. 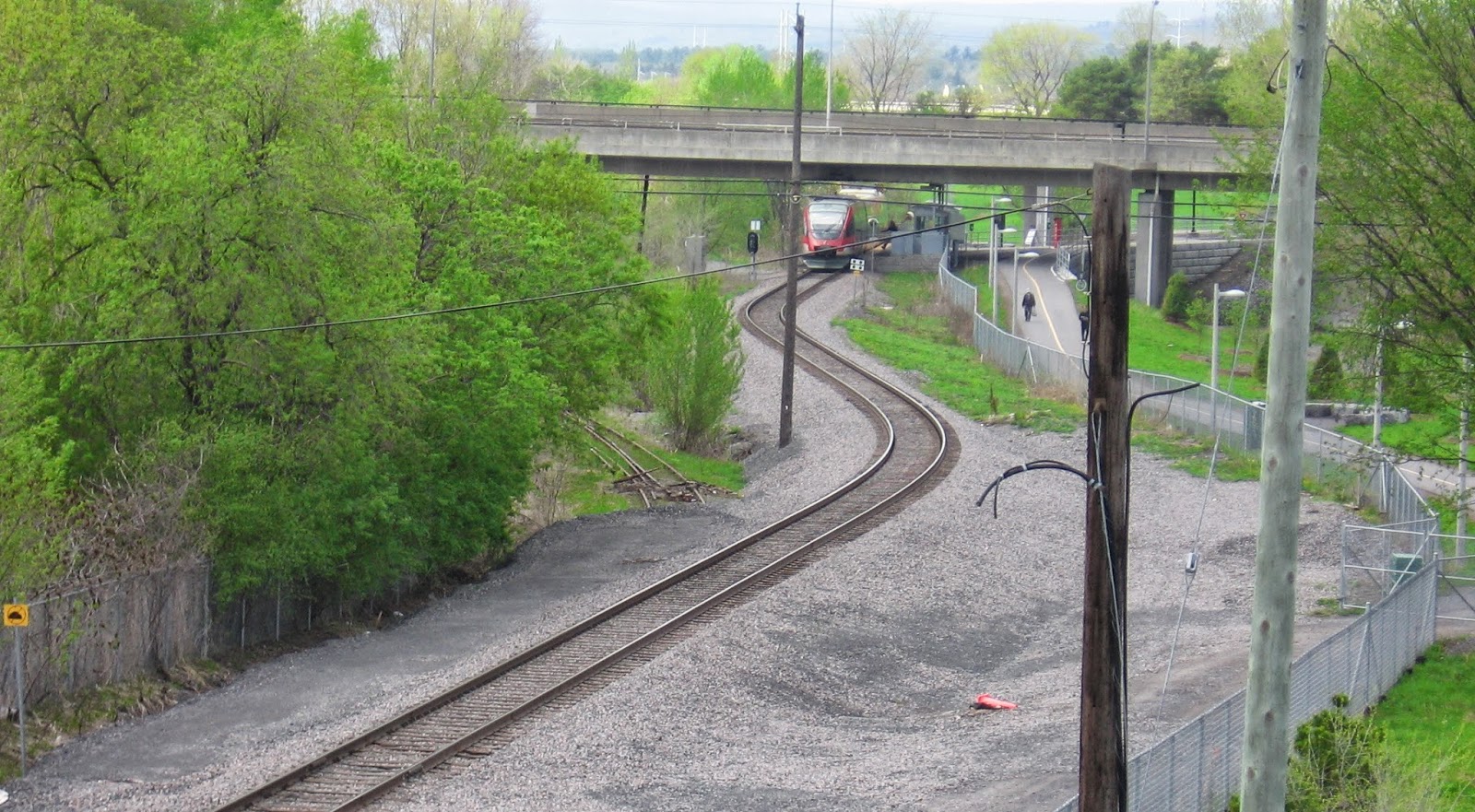 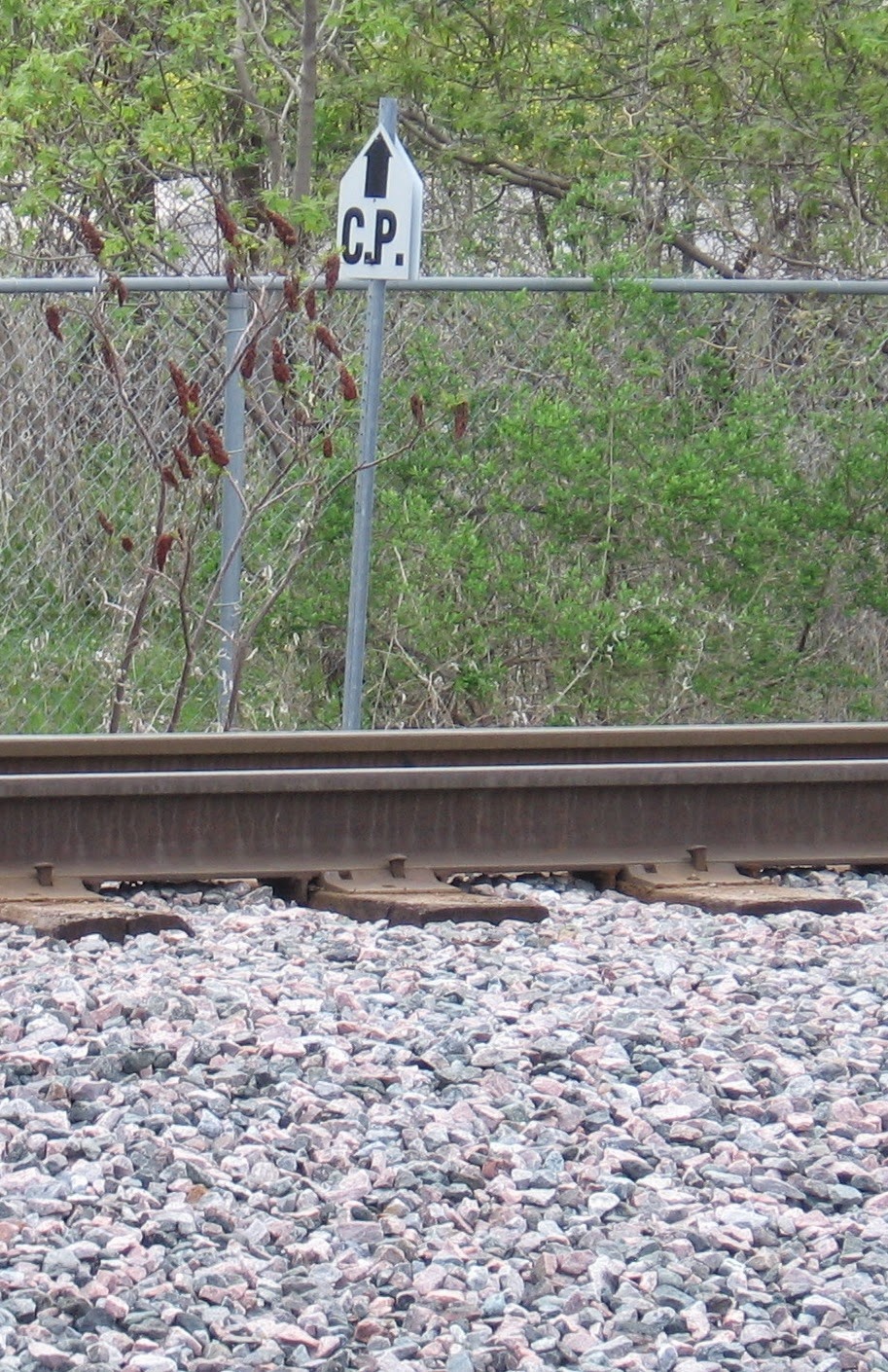 This connection, as you can see on the left, still bears witness to the time when the line was part of CP's Ellwood Subdivision.

The other side of the sign reads "CAP" which obviously stands for the Capital Railway, which is the official name of the O-Train operation in the city as it stands right now.

This severed connection is not, on its own, a big deal, but it takes on more significance given what has happened on the other side of the river in recent years.

As I mentioned in a previous post, the bridge connects to Lemieux Island in the Ottawa River, which marks the official end of the Quebec Gatineau Railway, a shortline owned by Genesee and Wyoming. I was doing some research on this railway the other day, trying to figure out where I could go to shoot it, but discovered that it no longer operates in Gatineau, since its main customer on the river, a former pulp mill, has been closed for years. Even more discouraging, I failed to realize that the railway has severed its connection to the tracks in Gatineau, including the stretch leading to this bridge. The furthest west the railway comes is Thurso, while a local continues to serve the Buckingham spur. Much of the QGR right-of-way in Gatineau has been transformed into a controversial rapid bus transit system, which has garnered mixed reviews from residents of the city.

What does this mean for the Prince of Wales Bridge?

Well, it means it is truly on its own for the time being, until such time that the powers that be in Ottawa and Gatineau, not to mention other levels of government, decide to establish a commuter rail link between Ottawa and Gatineau on the remaining trackage. This continues to be a no-go for local politicians, for reasons that escape me.

In the fall, there was a call from city staff to transform the bridge into a recreational pathway for bikes and pedestrians by 2019. This would be a great link, but it also prevents the capital region from realizing the transit opportunity the bridge represents. The report outlined that the city is hoping to do something with the bridge by 2025. In other words, there are no plans. In fact, despite pleas from transportation advocates, the city is not even maintaining the bridge.

This is what the bridge looks like these days, starting with a view from the Ottawa River Pathway. 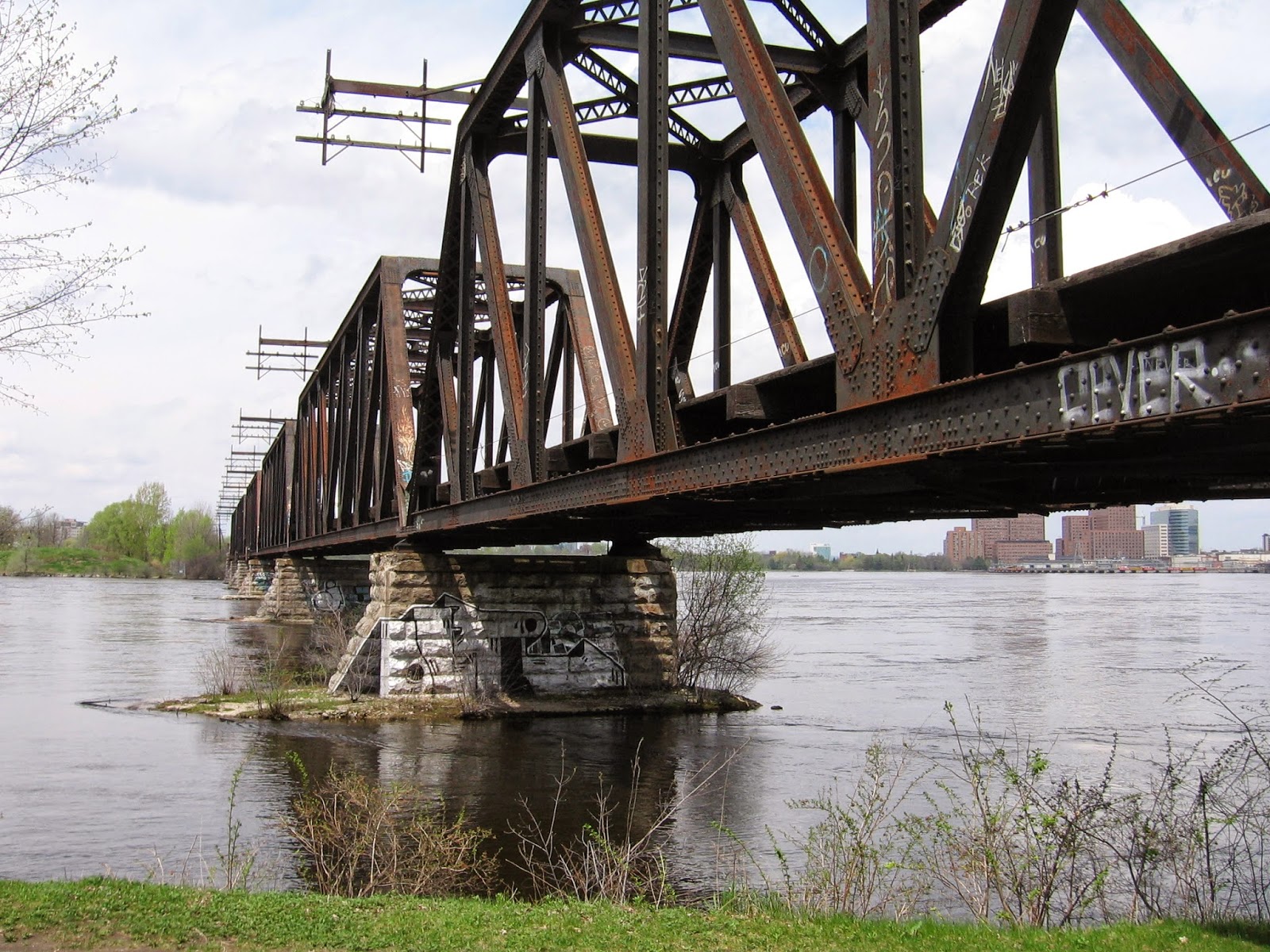 And a view of the tracks leading to the bridge, just past the end of the Capital Railway. You will notice, compared to shots I took at a similar time last year (see Prince of Wales link above), the foliage is a little late in arriving this year. 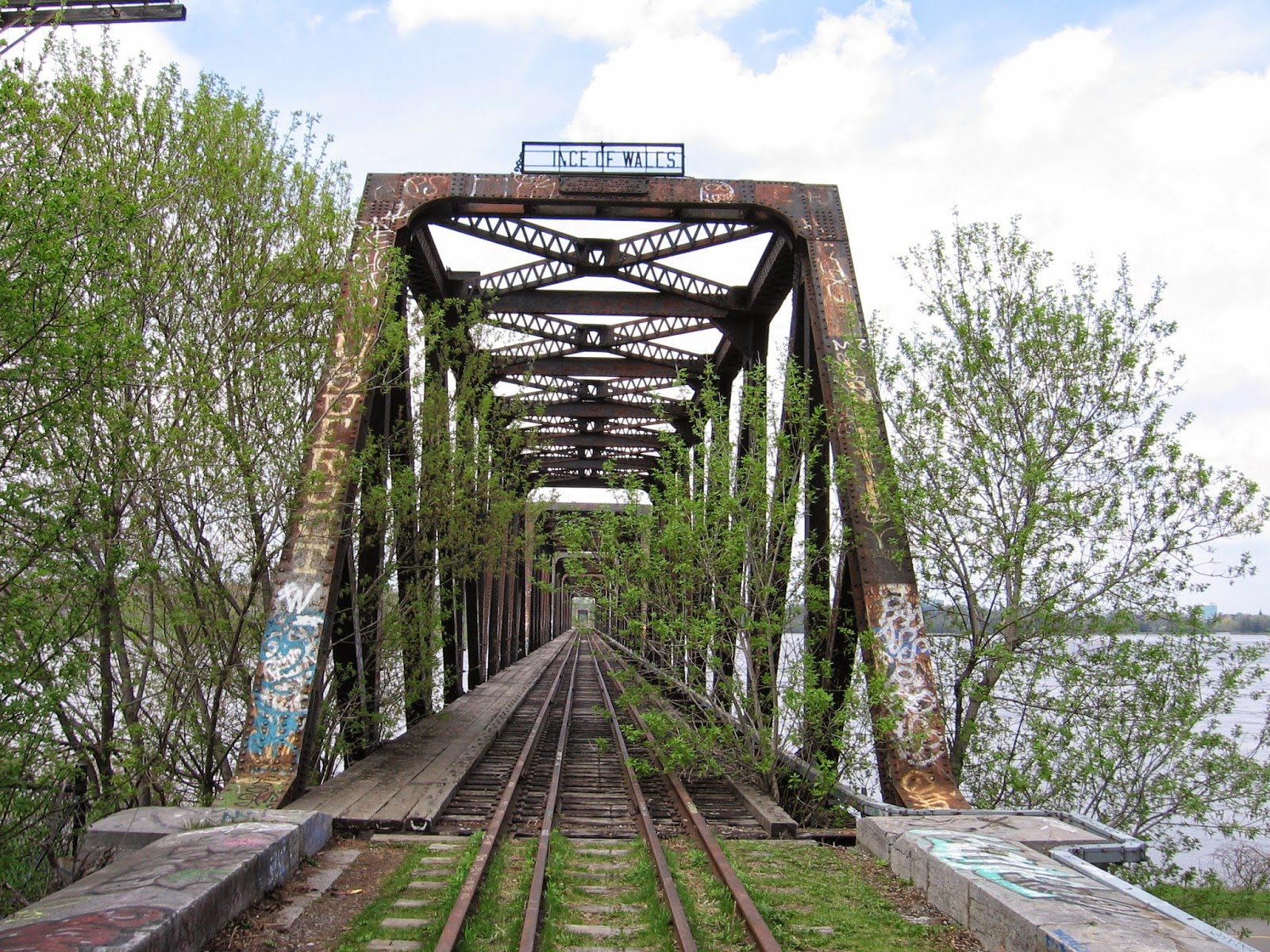 And a shot of the Prince of Wales marquis (or is it Ince of Walcs?) 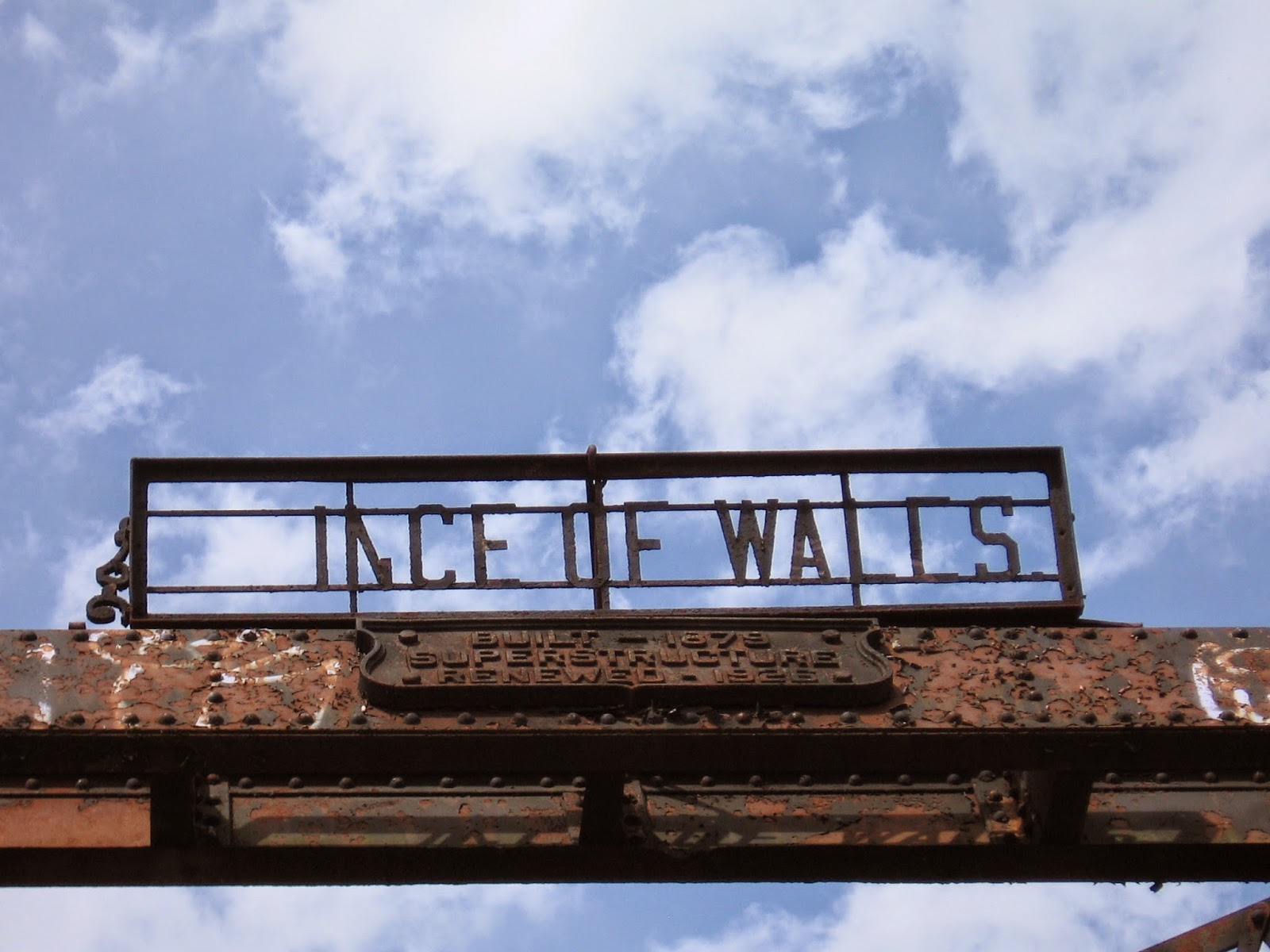 On the plus side, work on the new passing sidings on the Capital Railway has finally been completed, although the new Alstom trainsets have yet to be placed into service. The new sidings have also led to new signalling equipment. Here's a shot of a southbound Bombardier trainset from the Somerset Street overpass. 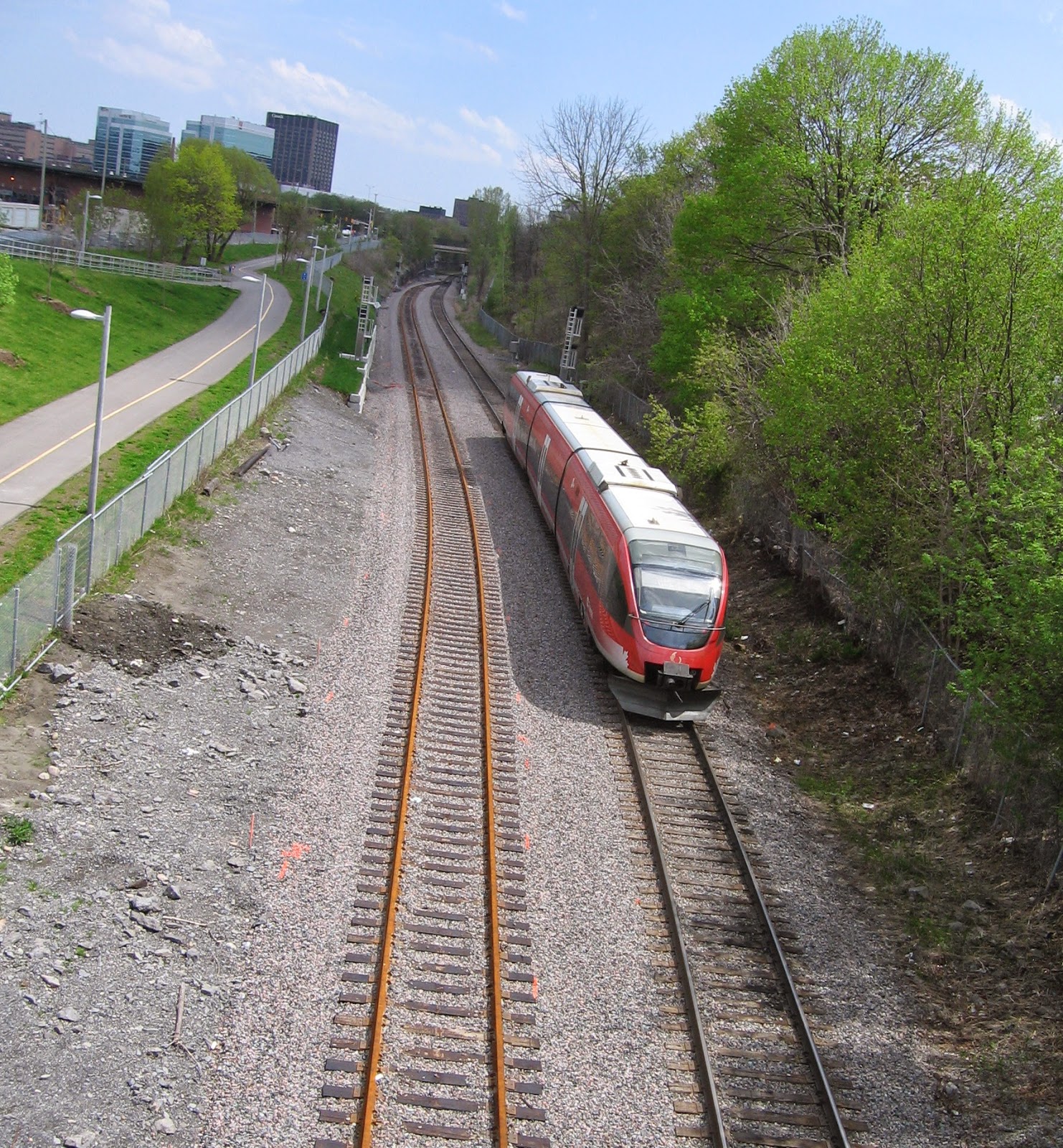 I have not heard any news as to when these trains will give way to the new Alstom trains, although I would suspect that the new trains will be put into service before the coming school year, since Carleton University, at the half-way point of the Capital Railway, represents one of the biggest sources of O-Train ridership. The new O-Trains are no longer parked in Walkley Yard during the day, so I assume they are being tested somewhere. I dropped by Walkley recently and saw no trace of the new trainsets.

I think the track that was pulled up on the quebec side was mostly replaced. I know it goes at least as far as the bridge over the Gatineau river, but I think it stops there and resumes on the other side, which of course makes this trackage pretty much on its own. I think just about all of the track that was pulled up was actually re-laid, in the event that someone would use it again, probably light rail transit.

From what I know, there is a plant in Gatineau not far for the former QGRY yard that has resumed rail service recently, although I could be mistaken.

It does seem as though the Maniwaki sub is doomed though. It's unfortunate but it seems that the cost to repair is prohibitive to the point that the plug will probably be pulled soon.

That's good news, Keith. I had read that the track along the Rapidbus lanes was going to be replaced at some point, but didn't realize the city had moved so soon. Still, there was the issue with the disconnection of the QGRY right of way at Lorrain Ave. Hopefully, the rail service has resumed, although I doubt it will mean much for the trackage around the bridge. Thanks for the update!

How long ago did you look at Walkley? I haven't been there since April, but the Alstoms had been moved from their place out in the main yard into the fenced Maintenance facility, and weren't visible from Albion Road North. I don't know where else they would be hidden.

Alex - I was there just a few days ago, and the Alstoms were nowhere to be seen in the yard. It is possible there were in the fenced in maintenance facility, as you say. OC Transpo has not been clear about how long these new trainsets will be tested and when they will be put into service. Thanks for your comment.

I saw one testing in the middle of the night last fall. I was walking away from Greenboro at 2 am on a Sunday morning, and I turned around to see the headlights of a LINT coming towards the station. I ran to meet it, and got the platform as it pulled in. There were Alstom engineers on board along with Sandbags, and the platform extenders were flipped up, with instrumentation cables taped to the side of the train. I haven't seen one since, only track work taking place most nights.

It is only last year that the switch to the POW bridge was covered in gravel. Prior to that it was only disconnected, but level with the CR track. I believe the reason for raising the track is due to the curve around the hydro pole. Before the track was raised, trains would slow down, travel around the pole and then power up the hill to Bayview, rather than just letting gravity slow the train down as it goes up the hill. Raising the track before the switch allows the trains to use gravity to slow down, then go around the curve and coast on a more level track into the station.

On the Gatineau side, the tracks are in very good shape and do continue across the shared bus-train bridge, with signalized separation from the one lane bus traffic and a north to east switch and shallow angle crossing on the west side of the bridge allowing access to the track to Wakefield. I think the only thing stopping a train from accessing the POW bridge on the Quebec side is the crossing at Boul Alexandre-Tache that has had a layer of asphalt laid over it and crossing lights removed, but the asphalt could be removed easily even for temporary use.