Thanks to Beachburg Sub readers, I finally captured a ghost in the form of an actual CN freight train in Ottawa. With so few freight trains to catch in the capital, I think calling these locals ghosts is appropriate.

On Sunday, April 27th, I decided to venture outside and try and catch CN 589, which makes its way over Via trackage out to Twin Elm, a small rural four-corners nestled beside the meandering Jock River. The picture below is CN 589 crossing Moodie Drive, near Bells Corners, which was the happy end result of a curious morning adventure. Notice how CN GP9 4114 has made its way to Ottawa, which is the first I have seen such classic motive power here this year. 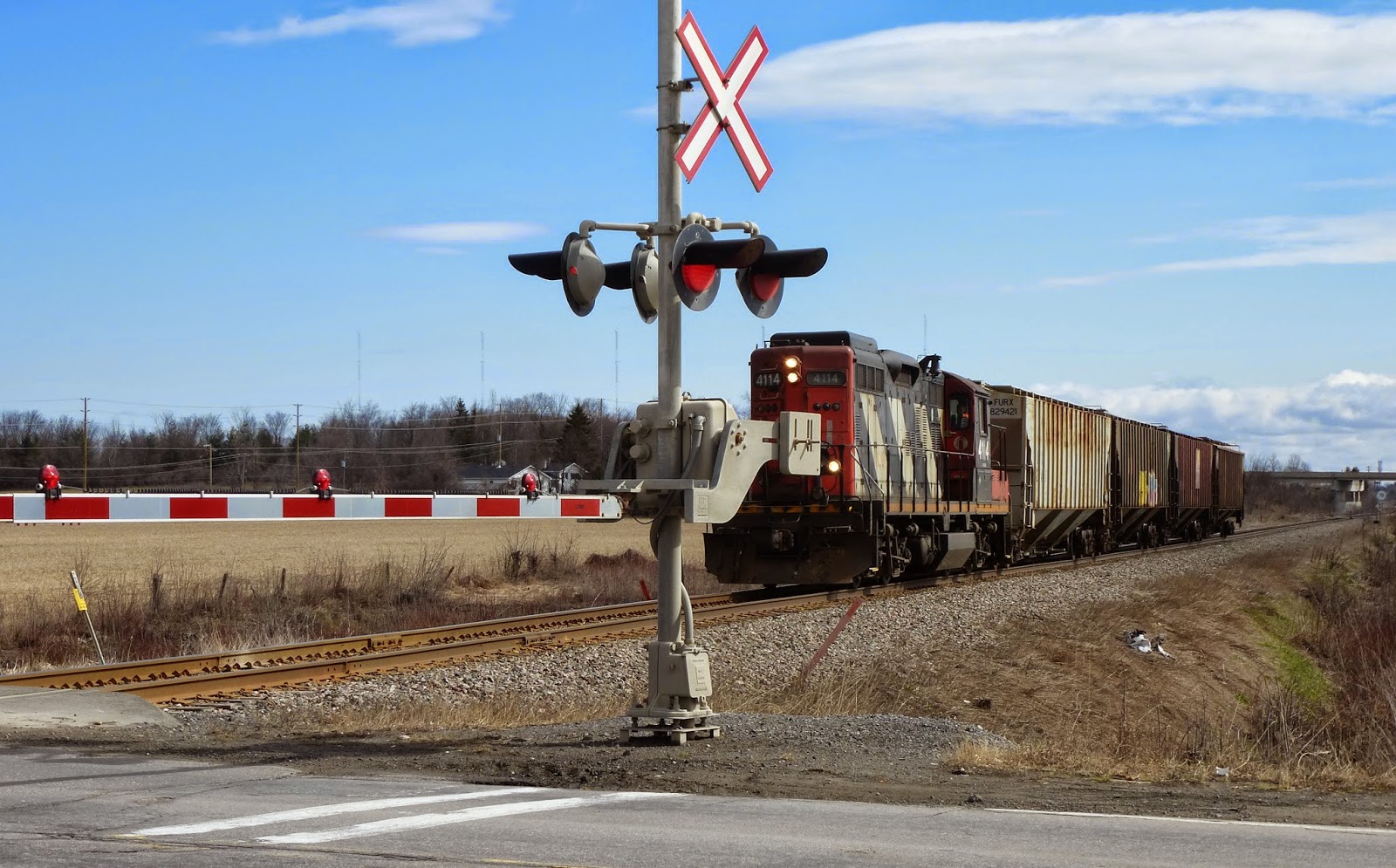 Here's the story of how I ended up getting this shot. I will disclose that I rely solely on schedules, and not scanners, adding an additional layer of difficulty to my chases. My journey started as I drove down Old Richmond Road heading south, since the road parallels the Smiths Falls Sub for the most part. My destination was Twin Elm, since that was the final destination for 589 on its Sunday trip. When I arrived there, nothing was happening at the SynAgri feed mill, but I did snap a shot of two hopper cars, one of which looked like a former Chicago and Northwestern car, which was lettered for the Arkansas Oklahoma Railroad (see comments below). I was reasonably happy with this catch.

However, seeing nothing happening, I then proceeded further down the line to the village of Richmond, since maps showed there were a few spurs there. I arrived at the McBean Street crossing and saw nothing, except an old piece of track maintenance equipment on a stub track. 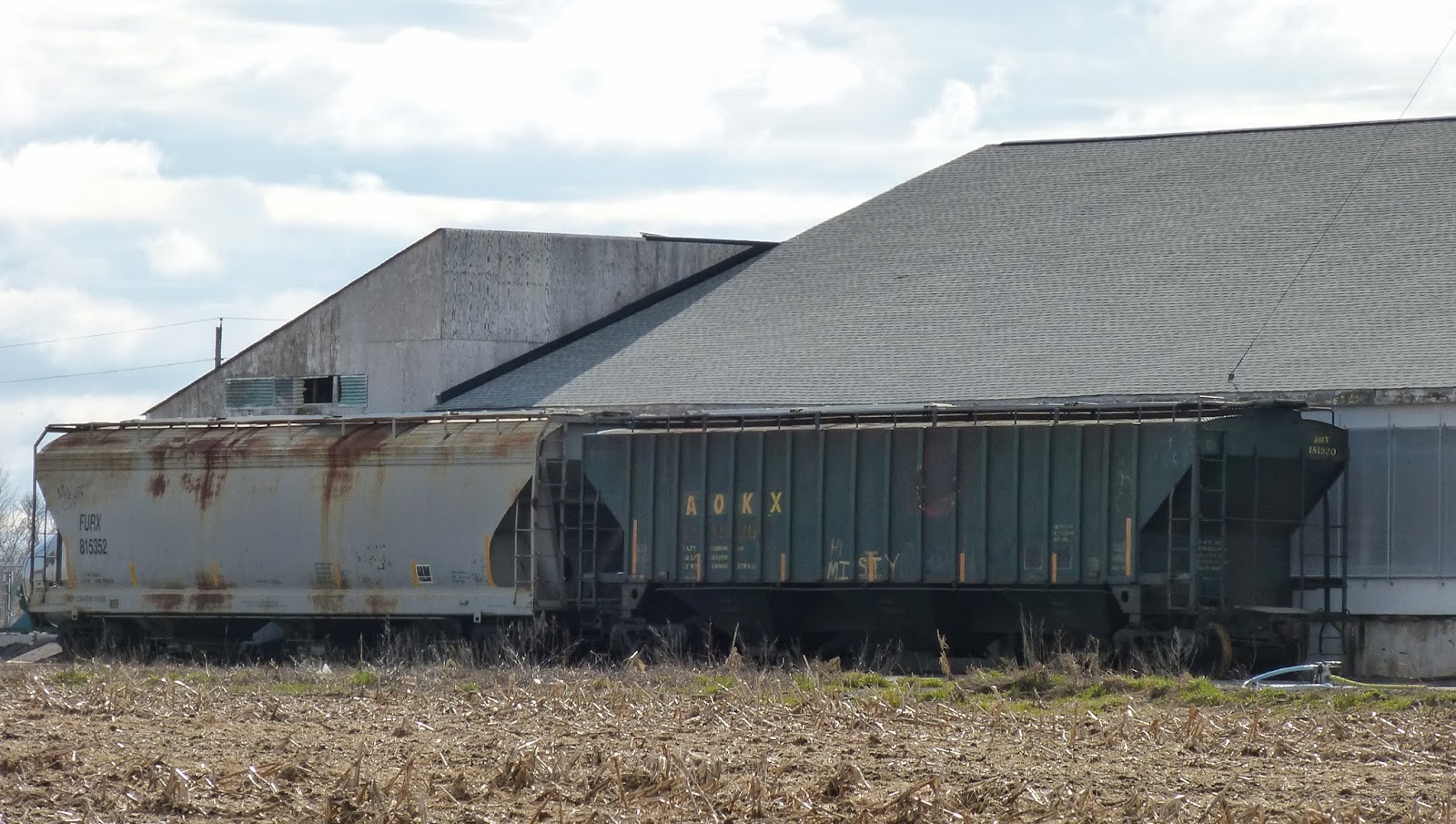 Crossing the tracks in my car, I looked around and noticed some lights coming down the track. Success! CN 589 was coming. I raced to park the car to get back to the tracks with my camera. When I returned, I was a little disappointed that the train was actually an early morning Via corridor train bound for Toronto. The train was moving at its maximum allowed speed, which made it very difficult to get my camera settings right. Also, I was in a very awkward position to shoot, due to the sightlines and the fact that I couldn't safely cross the tracks. So, this shot was about all I got from Richmond. Scanning through my images once the train rushed by, I was disappointed that this shot below was the best I could manage.

Sometimes, it is just not meant to be. 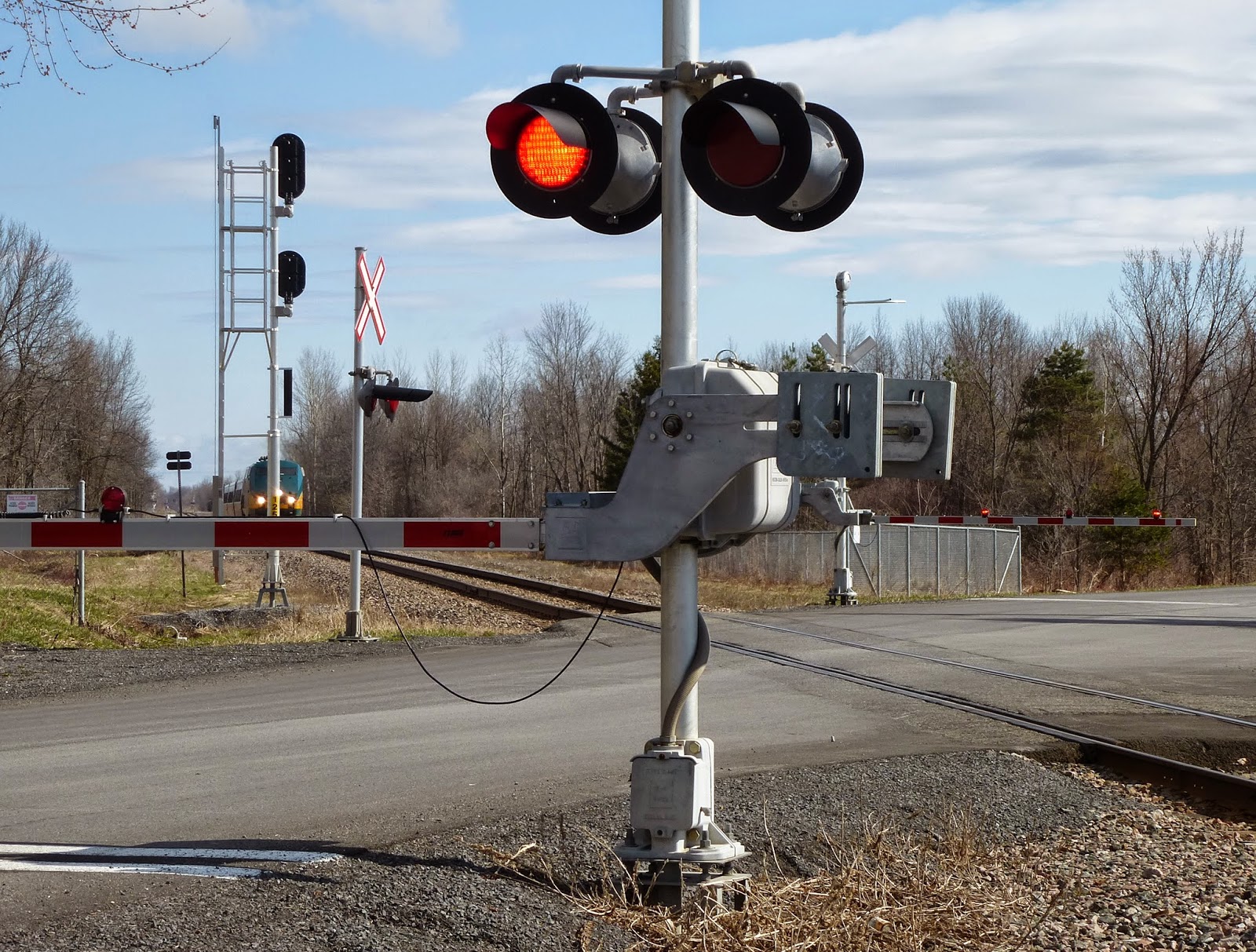 ﻿Heading back home, I decided to take a short detour down Moodie Drive, just to see if maybe CN 589 was waiting for the Via corridor train to clear the tracks. I was pretty sure the local hadn't done its rounds any earlier. I crossed the tracks and again saw lights coming down the tracks. This time, I knew it was 589. And, obviously, it was making its way much more slowly, allowing me to set up close to the tracks in a much better position. The top shot in this post was my favourite, but I also loved this shot of the old geep making its way toward the Jock River bridge. Notice the retrofitted ditch lights. The unit had a similar pair on the other end as well.
I knew that CN services the Kott Lumber facility, so I was hoping I could catch some switching action. 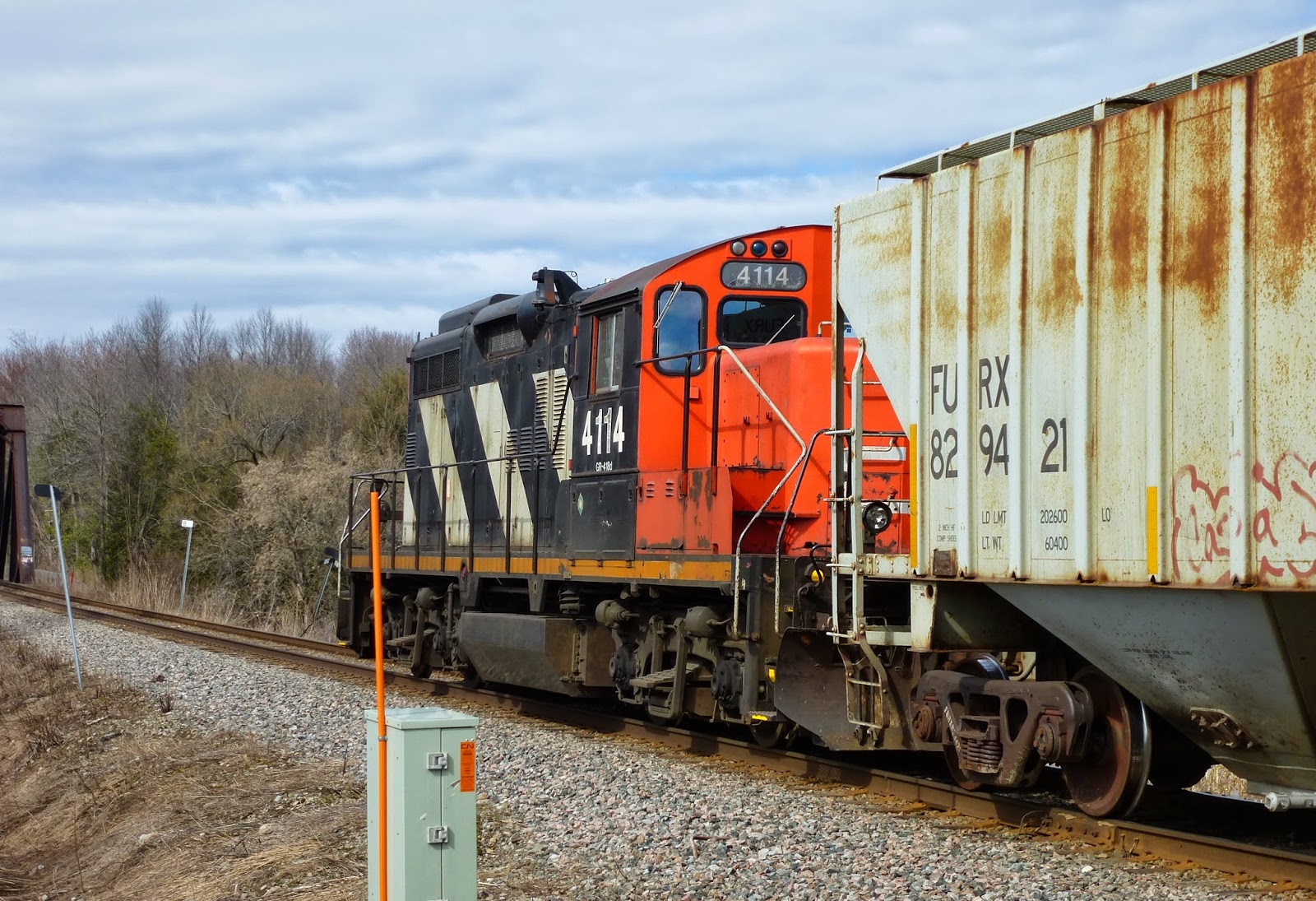 As you can see, this is what passes for a freight train in Ottawa these days. Back in the days of the Ottawa Central, these tiny consists were the exception, but they are now sadly the norm. In the shot below, 589 heads for the Jock River trestle. 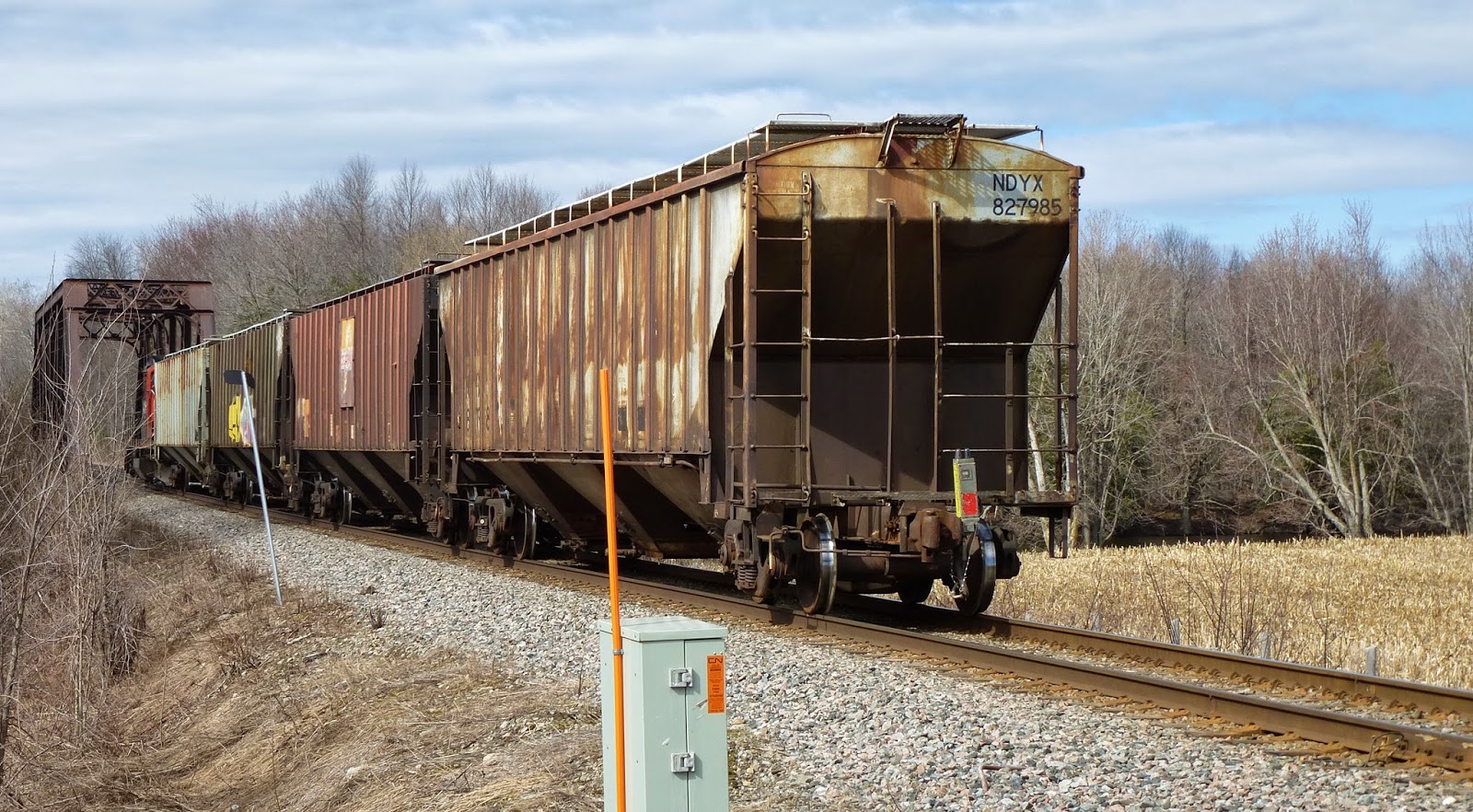 And, as luck would have it, the train stopped as the crew threw the switch for Kott lumber, to retrieve an empty lumber car. This is the type of shot that will not be possible later this spring, as the brush will make any such vistas impossible. Still, I was incredibly excited to catch this action, the first freight action I have caught outside Walkley Yard since I began my blog last year. 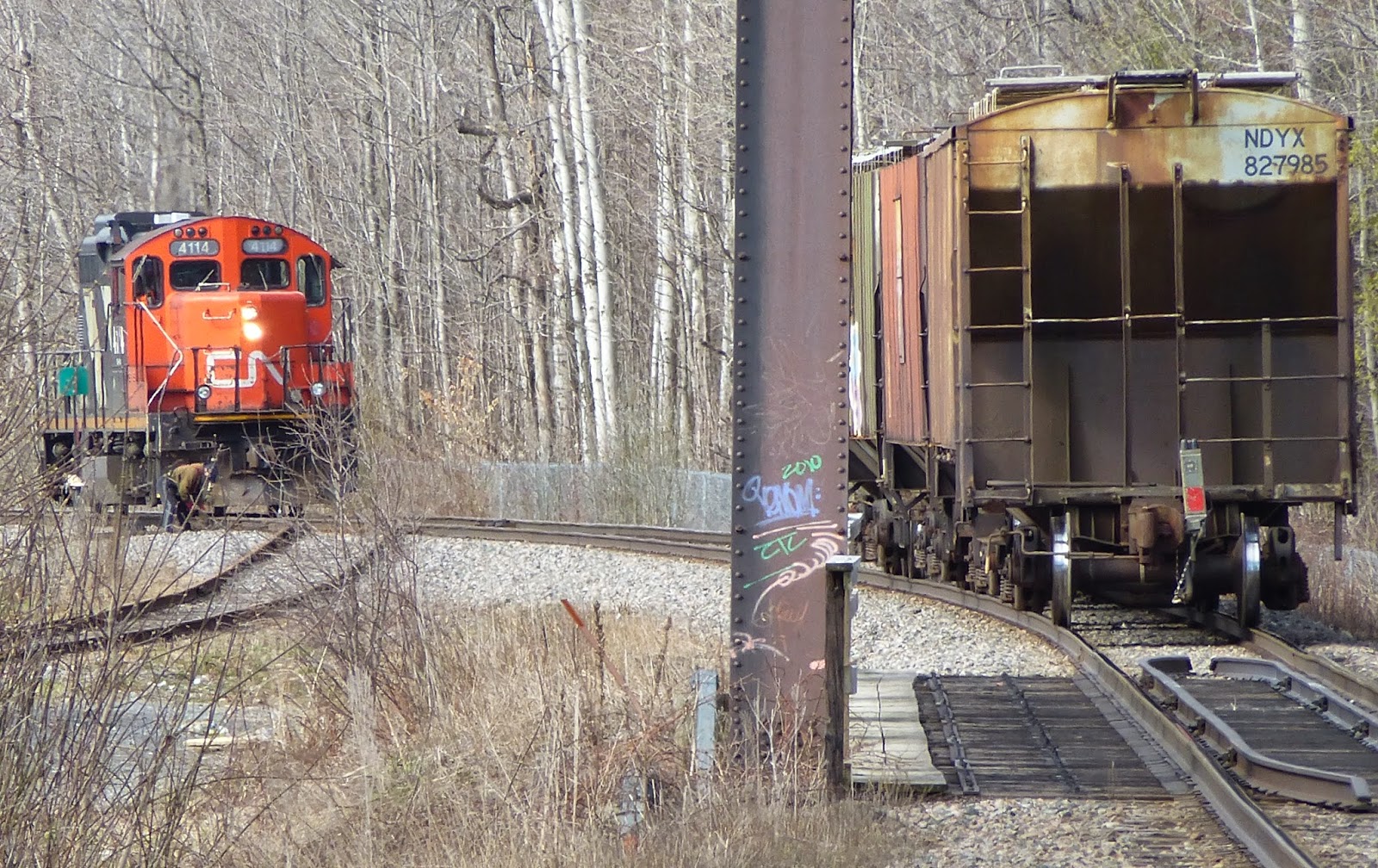 Again, this will be a shot that will not be possible later this summer. 4114 makes it way toward the empty centre beam lumber car before it proceeds on to Twin Elm. I toyed with the idea of chasing the train to Twin Elm, but I decided to call it a day, with the thought that I will return another day to Twin Elm to take shots, since it is an incredibly scenic little rural spot for shooting trains. 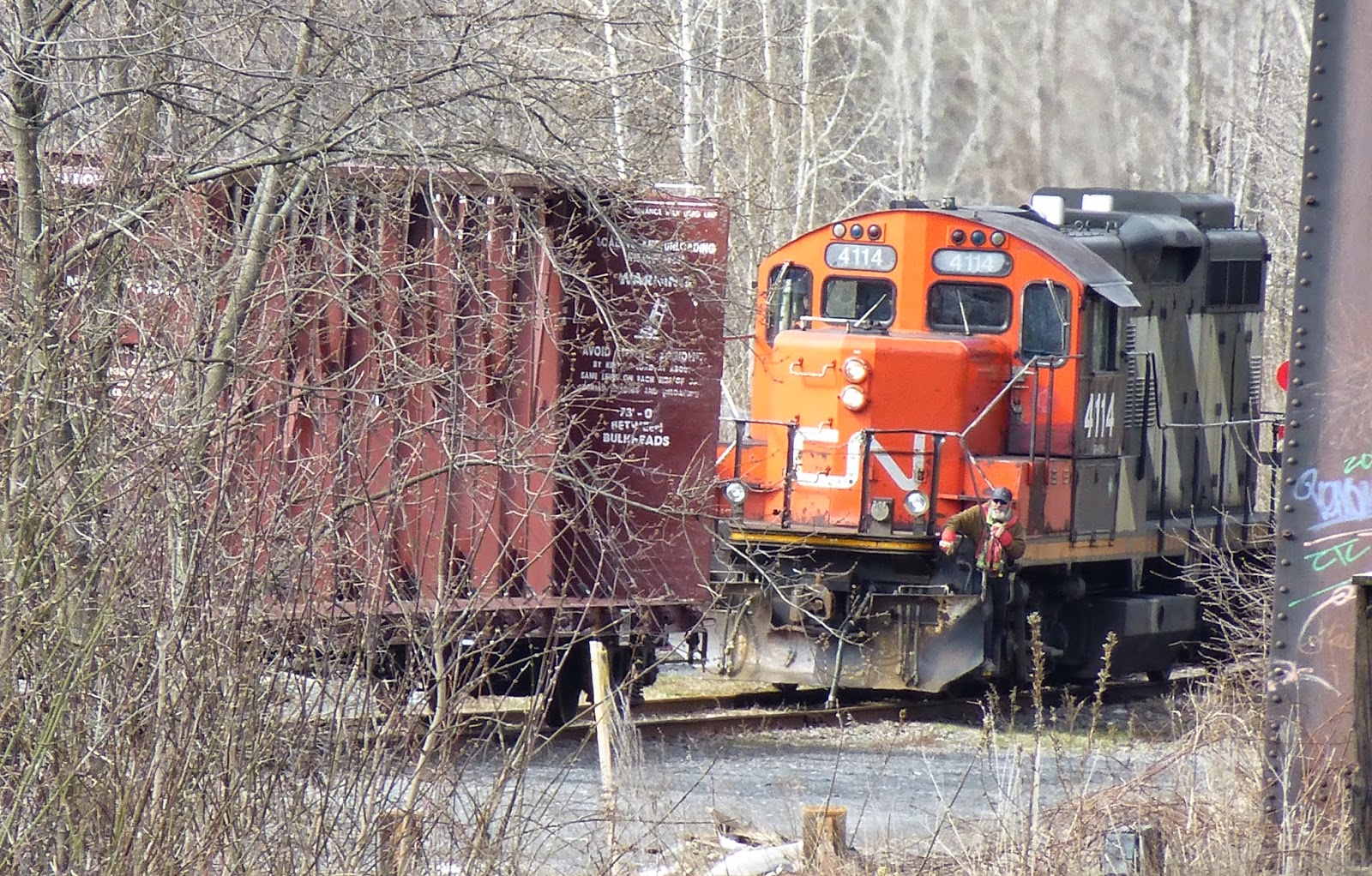 And that is the story of my first successful pursuit of the 589 to Twin Elm. Now that I know the schedule Sunday and what to look for, I will be sure to capture this local more. And I will be sure to be ready for the Via too.
Posted by Michael at Thursday, May 15, 2014

I noticed a newspaper ad offering Kott Lumber for sale. It must have been purchased and now operated by a new owner?

Glad you had success on this chase!
Eric

Nice post. Seems the best one can do these days for Ottawa is look up old YouTube videos of the runs up to Pembroke and to/from Coteau in the middle of the night.

Any idea why AOKX has an "X" at the end? Perhaps a separate holding company for an AOK car leasing business?

Thanks for the comments, gents. Eric -- I have not heard much about the a sale of Kott lumber but I can verify that it's business as usual there, complete with lumber delivery via rail. Bryan -- good catch! the AOKX reporting mark is actually Greenbrier Management Services and not AOK Railroad, as I thought. Thanks for the catch!

As you said, AOK is a real railroad, but I'm pretty sure they leased a lot of cars far from their homeroad. Perhaps this profitable part of the business has been scooped up by an investment company? According to the Internet, there was an article in Trains magazine that discussed AOK/Greenbrier.

Unfortunately I don't have this issue and I'm not sure my local library still has a copy. Maybe you or one of your readers does...?

Who knew how much interest one covered hopper could garner from The Beachburg Sub's readership?

I reviewed the June 2012 TRAINS. There is a four-page article on the AOK. Some highlights:

-AOK operates cross-Oklahoma, former Rock Island trackage then UP was operator for the state of OK
-moves lots of rock and frack sand.
-rosters fewer than 10 locomotives
-Greenbrier approached AOK re: using their reporting marks
-AOK has had to field phone calls from potential car leasers, though Greenbrier owns the AOK-lettered cars, part of the latter's 224,000-car fleet
-32,000 cars listed with AOK reporting marks, though in reality there are only 10,000ish cars.
-AOK actually owns only 10 freight cars

So, perhaps the 'X' has been added to clarify the fact that these are lease cars.

Thanks, Eric! I was looking for my issues of Trains that explained that relationship between AOK and Greenbrier. I'm glad I took that photo of the hopper and posted it!

Hi Michael, great catch here. You said you rely solely on schedules, where did you get these schedules?

Thanks for your comment. I was given a heads up from a friend with CN who told me where CN locals go each day. Then, I try to figure out when to spot the locals, since CN heads out of Walkley Yard fairly early each day (around 8 am). I focus my efforts on the Sunday local, since it usually operates around the Via morning train, either before or after. So, I say schedules, but a lot of it is based on observations since local freights don't rely on a strict schedule like Via.

Do you know what time he passes twin elm? Also what do you think is the best place to catch him?