I have a couple of railway photos from my teenage years that stand out among the others. I still look at them, years later, and can vividly recall the moment I snapped these images. I have also taken a few lately around Ottawa that have really stood out among my recent photos. The technical details aren't as important to me as the story behind the photos. That is what is so infinitely interesting about railways. There are so many stories that are tied to the railways in Canada.

This one (below) has to be in my top three. It was taken at the Windsor CP Rail yard in the summer of 1991. The locomotive is a C424 made by the Montreal Locomotive Works (Alco), according to what I was able to find online. Even when I took this photo in 1991, this engine looked old and tired. It was just being guided out of the roundhouse onto the turntable before it was put back into service. The modifications on the side are curious. I have not seen those types of grills/vents on an engine since. 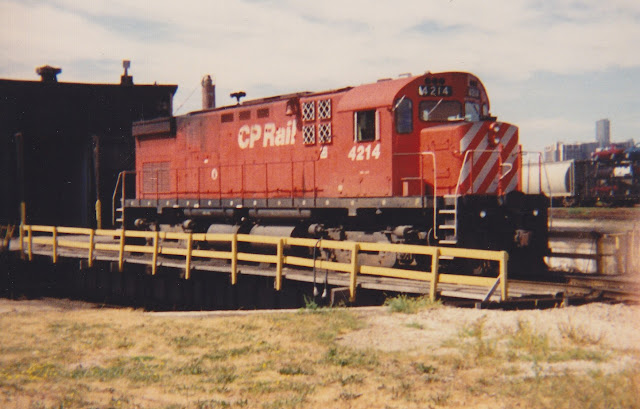 If you look to the right of the photo, you can see an open-air CP Rail autorack, which was a rarity where I lived, since most of the autoracks that were interchanged between CP Rail and the CSX Sarnia Sub were covered autoracks. Behind the autorack, you can just make out the famous Renaissance Center in Detroit (The Ren Cen as they call it there), home to General Motors' world headquarters.

The story behind this photo is that my grandfather brought me to this rail yard one day in the summer of 1991. My grandfather worked as a rolling stock mechanic on the CPR in Chapleau and then Windsor. He first brought me to this yard when I was very little (probably three or four) and took me aboard a locomotive for the first time. This time, I was old enough to appreciate the experience, especially since it allowed me to get photos on CP property that I would otherwise not be able to get. I remember one of my grandpa's co-workers telling him, "We could really use you here these days." It made me proud to hear that.

This engine, amazingly, was not scrapped until 2010. I found some other shots of it on Flikr (see what 4214 looked like more recently here) where a former Ottawa Central employee explains that the unit saw use on the Quebec-Gatineau Railway and then New Brunswick East Coast before it was scrapped by CN when it acquired NBEC.

This photo (below) is also a favourite. There really isn't a special story behind this shot. It was taken around the same time as the shot above (Summer 1991). This was taken at the St. Clair Boulevard crossing on the (then) edge of my hometown, Corunna, Ont. The field to the left of the train is now a subdivision.

What makes this shot special to me is that I earned this shot. I heard the train coming from my home, so I raced into the house to grab my camera and hopped on my bike to meet the train at this crossing. Seeing four geeps at the head of a train on this sub was very rare. Most trains during the time were led by a pair of geeps, so seeing an extra pair in tow was a great catch for me. At the end of the train, there was a bay window Chessie System caboose (I will share this in a future post). The colour of the sky was blue that day, but the limitations of my cheap camera sadly resulted in the grey sky you see. I see this shot and I just think of the anticipation I felt when the trains used to come rumbling down the track and I would ready my camera. Since the volume of traffic on this sub was always light, it made this shot all the more rewarding. 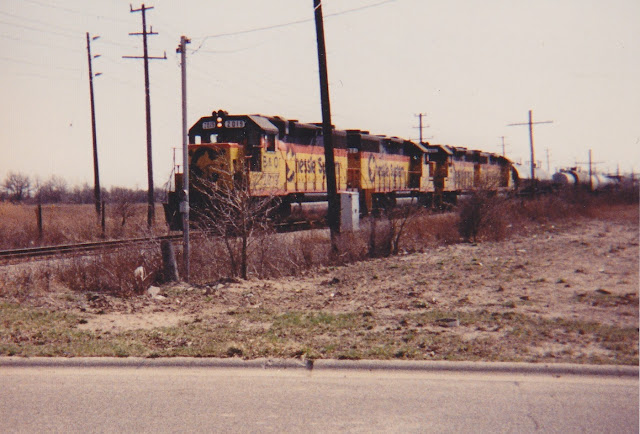 The final image is a more recent shot, but I was especially pleased with the movement I captured. I took the below photo while sitting on the Via Rail Fallowfield Station platform in south Ottawa on April 13, 2012. The train that is arriving is Train 46 from Toronto. 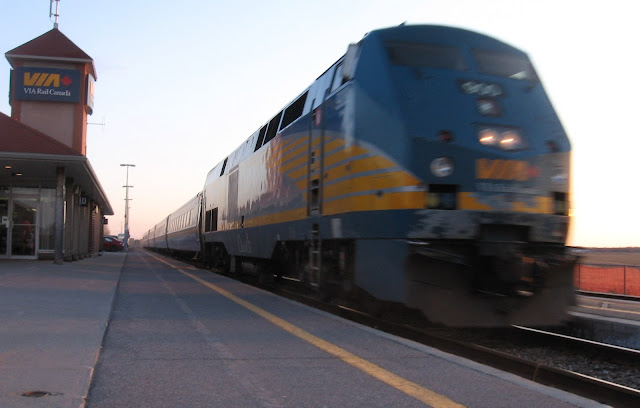 As you can see, I now use a better camera, so you can actually see the sky at dusk and some of the fine details in the background. I am not a fan of the P42 locomotive, but I like how the locomotive looks as it pulls into the station in this shot. I actually was trying to catch a still shot of the train creeping to a finish, but I ended up with this  blurry image instead, which was a happy accident.

The story behind this photo was that my wife had been away for a week, adjudicating a music festival in London, Ont. She was seven months pregnant at the time with our baby girl, so I was especially happy to see her come home, since I was still in my ridiculously overprotective husband/father-to-be phase. I brought along our pet dog Tessa to greet my wife at the station, since the dog was a Mommy's girl. The train scared the life out of my poor schnauzer as the P42 shook the platform while rumbling to a stop.

But it was a happy reunion nonetheless, once the train stopped. Our dog was bouncing all over my wife, delirious with happiness that she was back and the family was reunited once again. A happy family reunion on a small railway station platform. A timeless Canadian tale, no?

Great to see old 4214! I remember seeing it a few times on the New Brunswick East Coast Railway. I have a few photos of it here.