It's called the Government Conference Centre and as the ridiculously boring name suggests, it hosts federal government conferences. The building is off limits to the public for all but two days a year, which is a shame considering what an enduring beauty this building is. Those who know Ottawa's history know the Government Conference Centre as the old Union Station, once Ottawa's showpiece train station. The old building is unmistakable right in the heart of the capital, beside the Rideau Canal, just east of the National War Memorial, steps from Parliament Hill and across the street from its from its former railway colleague, the Château Laurier. 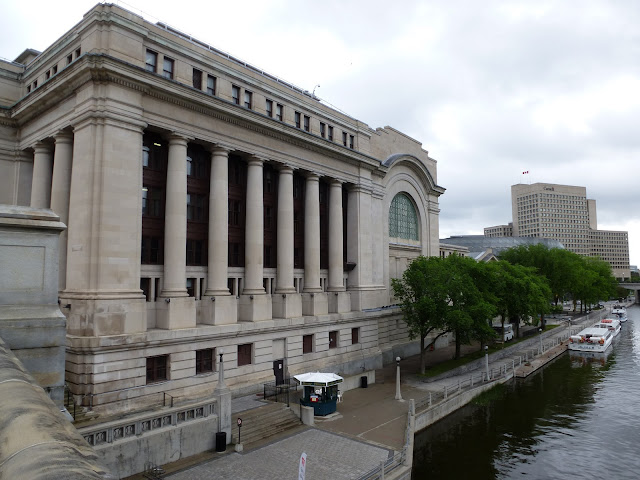 The former Ottawa Union Station still looks the part on its west side,
although its former rooftop dome and eastern facade have been ruined by
poor renovation decisions made in the 1960s.

The history of the old station dates back to the early 1900s, when the Grand Trunk began construction of the building after the railway received a charter from the city to build a unified station for each railway. It was intended to be a passenger depot for all railways serving Ottawa, including the Canadian National, Canadian Pacific, the Grand Trunk and the New York Central, although not all railways used the station at first. The station opened for business in 1912 on the same day that its railway counterpart, the Château Laurier, opened across the street. Both buildings opened with little fanfare, since the Grand Trunk's president, Charles Melville Hays, died aboard the Titantic a few months before the buildings were complete. Hays was the visionary behind the buildings. As I mentioned in a previous post, it is widely speculated in Ottawa that the spirit of Mr. Hays haunts the Chateau Laurier.

The station saw its last train in July of 1966 when the city removed the last of its rail network from the central portion of the city, as part of an urban renewal plan. The station was in danger of being torn down until heritage activists fought to preserve it. The building then became an exhibition hall for Canada's centennial before sitting vacant for year until it became the conference centre.

A number of plans have been floated about to bring the building back into public use, including an attempt to locate Canada's Sports Hall of Fame there and another attempt to convert it into a political museum.

Nothing has happened and it continues to be off limits to the public with the exception of the two days a year when it is opened for Doors Open Ottawa.

This is the best part of the station (below) the so-called Waiting Room, which was inspired by the ancient Roman Baths of Caracalla. 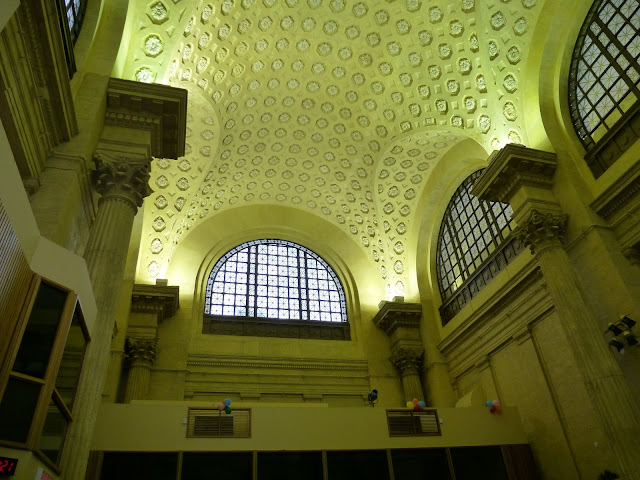 This is the window facing east. You will notice at the bottom of the photo some ominous looking windows. These are translation booths that are used for government meetings. The Waiting Room has a few of these booths, which serve as an odd juxtaposition to the classical architecture. Imagine waiting for your train here when this place was actually a station. 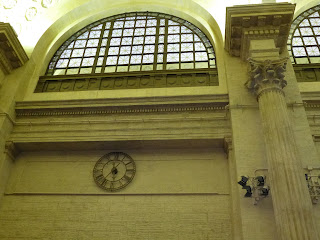 The old station clock (left) no longer works. If you walked under the clock out of the Waiting Room, you would have been headed to the old freight sheds, as they were called. These sheds were on the south side of the station, lined against the Rideau Canal. When the tracks were all pulled up, including the main track that once lined the east side of the canal, a scenic parkway, Colonel By Drive, was created.

Underneath Rideau Street, a beautiful tunnel was constructed to allow passengers to walk to the Château Laurier Hotel (see below). The tunnel wasn't opened for the event, sadly. 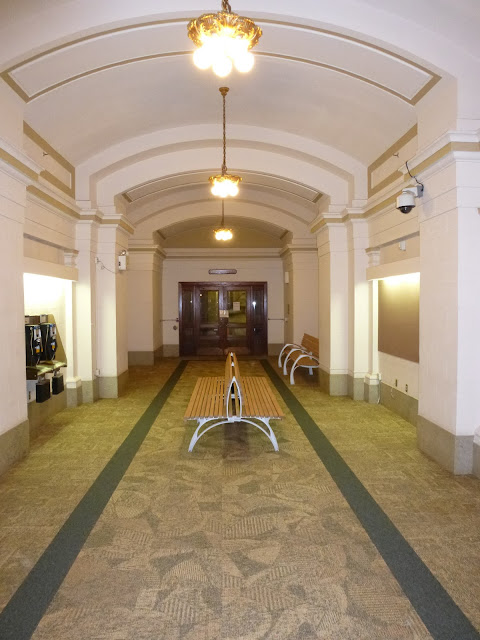 The tunnel has been beautifully preserved, complete with wooden benches that would have fit right in with the aesthetics of the original station in 1912. At the end of this portion of the tunnel, where you see those brown double doors, there is a brass nameplate that reads Château Laurier.

If you go to the Laurier, you will see a copy of a letter from Charles Melville Hays to Laurier, assuring him that the hotel that bears his name will be a proper tribute to the former prime minister.

Those who know Ottawa's history know that Laurier was more than a little uneasy about plans to name a hotel after him. However, he allowed it to happen and the rest is history.


Looking across the street from the station, you can see a gravel pathway (bottom right of photo) that was the former right-of-way that led to the Alexandria Bridge that carried trains over the Ottawa River to Hull and then on to Montreal. You can also see the train shed that is now part of the Chateau Laurier's parking lot on the bottom right as well. Those locks are the Bytown Locks, the beginning of the Rideau Canal. 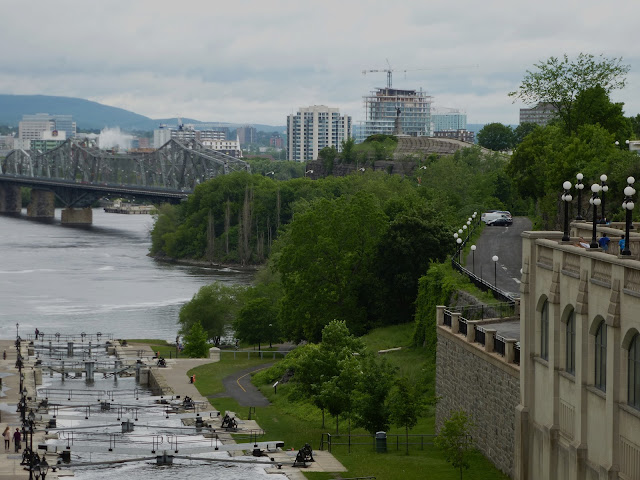 When you first enter the railway station, this is what you see, looking up. The concrete above the entrance used to read Union Station. 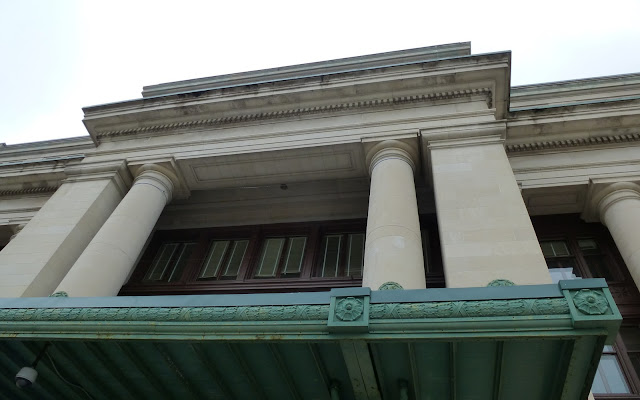 There are plenty of reminders of the old station's history inside, including this banner at the front staircase that leads down to the Waiting Room. 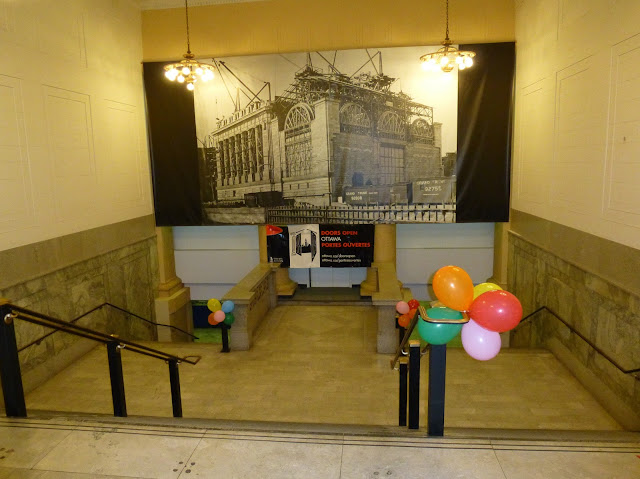 There is also this interesting series of paintings (below) that chronicles the railway's influence across the country. I thought this was a classy touch. 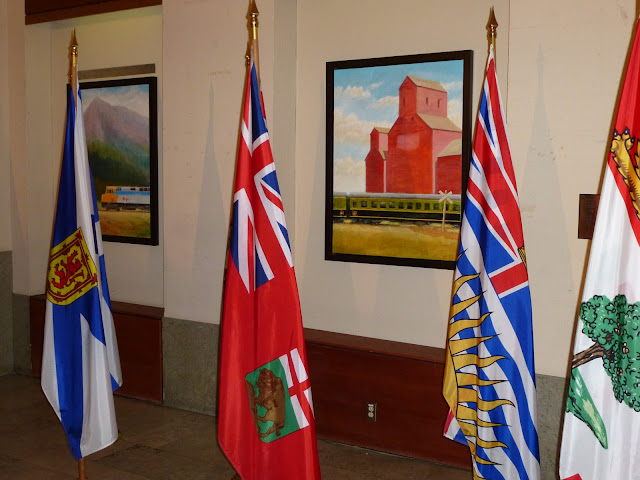 Here's a look at the back of the station in busier times (below). You can make out Parliament Hill on the left and the Château Laurier directly behind the arched windows of the station in the centre of the image. 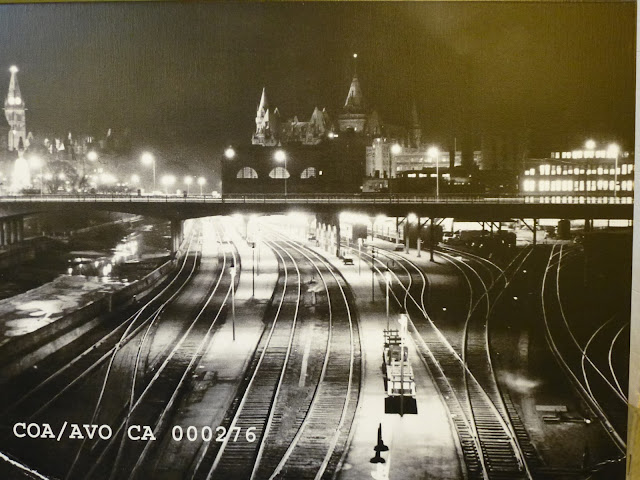 There were talks that the city's light rail commuter network, which will one day operate beneath the downtown in two parallel tunnels, should use the old station as the main downtown commuter stop. Sadly, this idea was shot down, which will leave the chronically underused building off limits to the public.

One wonders how Ottawa might be different today if trackage was left in place along the east side of the canal and the old station continued to operate. Ask people living along Colonel By Drive now if they would prefer a busy parkway with steady traffic throughout the day or a rail line with the occasional passenger train. I know which option I would choose.

A nice set of photos, Michael. Thanks for sharing these. In retrospect, though moving the station seems dumb, the NIMBYs in Ottawa would likely not put up with diesels downtown. One could not think of a better, more picturesque location, though!
Eric

Agreed, Eric. Ottawa is spoiled by not having any trackage in its downtown and no one would tolerate tracks so close to the tourist area now. But I guess what bothers me is when NIMBYs oppose rail lines, train horns etc. so vociferously, but they have no problem with congested roads and the associated problems.

I just wanted you to know, the photo of the frame photographs is actually hiding the remaining Ticket Booths, if you look at the ground you see the warped marble flooring from people waiting for tickets! (I work in the building and noticed your photos, thought you might be interested!!)

Thanks for sharing, Andree. That is fascinating. I have seen photos of those old booths. I will be sure to look for that during the next Doors Open event.

I remember this old Union Station very well my Dad was Station Master there. I would go visit my Dad while he was working. He was always proud to bring me and my brother on an engjne and we got to blow the horn and stay on the train with the engineer to hook up other wagons. Later when the train station moved in 1966 to its new home my Dad was still the Station Master there and that is where he retired from after 35 years (Jules Quesnel). This new Station I didn't like much too plain. Too modern the old one was really classy I loved the seating area it was beautiful. My Dad gave me a series of nice pictures of when the old Union Station was being built very nice to have a great souvenir. I recently bought a framed print of the Old Union Station which shows the tracks with trains, the canal and parliment building in the background it brought back memories. I also used the tunnel to chateau laurier when we went swimming in there pool that was special

Thanks for sharing your memories. It must have been fun to hang out in that old building when it was actually put to good use!

I lived in Ottawa from 1956-62. When looking at these photo's I remember well my Aunt that came from Halifax by train to visit with my Family for a week. The architecture of Union Station is so all inspiring!

Michael
Thank you for sharing your photos, your anecdotes, and your passion for rail in Ottawa.
Your photos are great, and the commentary is quite amazing.
I grew up in Ottawa and only knew the Ottawa Station. I can only imagine how convenient Union Station Ottawa was, and would still be.
In my dreams, I am a fireman for CP, steam era, of course; inspired by the late Ducan du Fresne, and Phil Jago, veritable firemen.
I would love to accompany you on your photography outings.

You sure got several great photos of Union Station here, Mike! It certainly is a shame that Ottawa went from having "too many" railways, as Jacques Greber puts it, to having not enough railways, on top of having an ugly Queensway that divides up the city (Which replaced the Ottawa, Arnprior, Renfrew and Parry Sound Railway), a train station located in the middle of nowhere and takes five to ten minutes to reach from downtown and clogged up roads.

Speaking of Jacques Greber, here's a link to one of the Greber Plan illustrations, which gives us a clear picture of what Ottawa's railway network was like in 1950.

Anywho, if things were my way, we'll still be well-served by VIA Rail, Moose Rail (For regional and commuter rail), the O-Train, OC Transpo and STO streetcars and Amtrak at Ottawa Union Station in downtown, only with the tracks electrified and in underground tunnels as they are led into downtown. Also, we'll still be able to take the Canadian directly to Vancouver without having to transfer at Toronto and that the Queensway would be redesigned into a four-lane boulevard designed to freeway standards, complete with the O-Train Queensway Line, the CN Rail Renfrew Sub (Twined and electrified) and elevated cycle tracks on the median.