It's a good news/bad news scenario for this rail line. 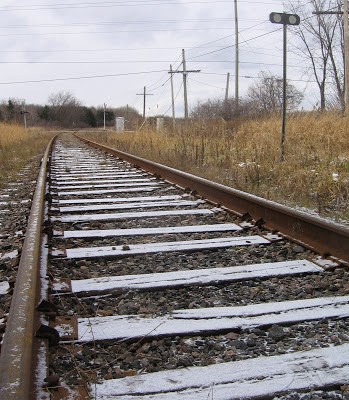 First the bad news. Canadian National has continued to rip up the tracks in Renfrew County, northwest of Ottawa, despite efforts to stop the track from being lifted. I emailed James Allen, former general manager of the Ottawa Central Railway, who confirmed to me that efforts to save the sub have failed. Allen was involved with Transport Pontiac Renfrew, a working group that was aiming to revive the line. Allen said CN has lifted the rails in Renfrew County, despite a petition against the move that was circulating and an attempt to have that region's MP Cheryl Gallant intervene. It's a tough blow for Renfrew County, no doubt, since the county has already lost its Canadian Pacific connection from Smiths Falls.

So, the good news. The remainder of the sub might not share the fate of the right-of-way in Renfrew County. That's because municipal officials in the Pontiac region in Quebec have a bylaw that prevents rails from being lifted in the municipality.

Allen said the rail from Quebec to Ottawa is safe for now. Allen also told me that he was mystified as to why Renfrew County did not enact a similar bylaw to preserve its rail line, but it's a moot point now as the line is gone.

A reader told me that a CN freight train with rail transporter cars has arrived in Ottawa, which to me suggests more line is to be lifted. I saw the first train with those orange rail transporter cars a while back, but I didn't think anything of it, since I was unaware of the fate of the Beachburg sub until recently. I wish I would have taken a quick snap. If you want to see an example of these cars that carry rail, go to Eric Gagnon's Trackside Treasure blog, since he has a photo of these cars from a past post.

So you may ask why CN is doing this, if there are local backers who seem to think they can make a go of it on this line? One main reason, according to one of this blog's readers, is that Beachburg line is composed of continuous welded rail, which is extremely valuable, particularly in other regions where CN is doing brisk business and needs to upgrade older rights-of-way. Allen said the rail from the Beachburg sub is headed west, no doubt to areas where CN is busy transporting oil and frac sand.

I didn't realize that the Beachburg sub was once part of CN's national freight route, which a reader pointed out to me. That explains why this sub has such valuable rail. I was told that, if the sub had jointed rail, efforts to save it would likely be successful.

Make no mistake, CN is in business to make money. It has obviously done its due diligence and figured that it is not worthwhile to operate on the sub. I don't mean to come across as being hard on CN. As a railway fan and industry observer, the move to scrap the line seems driven by immediate business demands, which is understandable. However, it still seems like a short-sited move to me.

The bigger issue here may be why there is no provincial or national policy on old railway lines. As I have mentioned before, rail lines are becoming increasingly important as a way to alleviate stress on overcrowded highways and to move goods in an environmentally friendly way. People and businesses are beginning to realize the value that trains bring to a national transportation system. Railways have not enjoyed this type of goodwill in decades. So why do these old lines get ripped up with nary a word?

If there are any other updates on Beachburg, I will pass them along.

I am trying to gather some information regarding the Beachburg Sub Line that is in the process of being removed. I reviewed CN’s discontinued rail list and note that mile markers 0.30 – 6.00 and 14.50 – 88.70 have been discontinued. Could you advise as to how much rail has been dismantled and lifted to date or is planned to be removed in the near future?

If you could provide any information regarding the above or if you are able to refer to me individuals that have extensive knowledge in this matter that would be greatly appreciated.