End of the line in Ogdensburg, New York

It's always fun to get photos of railway action in new places. For me in December, an emergency run to Ogdensburg, New York for children's medicine turned out to be a unique chance to get a photo of the end of the New York & Ogdensburg Railway line in the small upstate New York town. It was not an easy photo to capture and I think I may have aroused suspicion. In any case, here's the story and some thoughts on this seemingly ordinary picture.

First, a little background. The NYOG is a shortline railway connecting the St. Lawrence River port in Ogdensburg with a junction with the CSX in Norwood, New York. The connection is with the CSX St. Lawrence Division, which is ex-Conrail, ex-Penn Central, ex-New York Central. The Ogdensburg rail line is 26 miles (41.8 km) long and serves some vital purposes that might not be apparent to the casual observer. It serves as a transloading facility for trucks that serve Ontario, Quebec and northern New York. According to the port authority in Ogdensburg, it carries plastic pellets, resins, oils, lubricants, fuels, adhesives, chemicals, feed, grain, fertilizers, minerals and some unique cargo like wind turbine blades. The railway is owned by the Vermont Rail System. This is the railway that took over much of what was known as Central Vermont, a one-time CN subsidiary.

Getting shots near the port is almost impossible, as the area is surrounded by chain link fence with razor wire on top. Not surprising. However, there is a small vantage point near the end of Paterson Street, where it intersects with a tiny dead-end Railroad Street. From this point, where there is a riverside parking lot, where you can see the end of one of the spurs that are scattered throughout the port area. This is the shot I got. 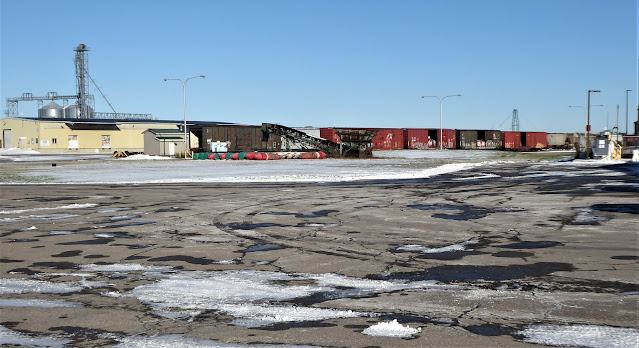 Big deal, right? Look closer. You can see the green boxcar at the end of the line has a roll-top door at the end that opens up. I have a closer image (see below) where I could make out that the car's numbering and lettering was changed to read "MW" which is code for maintenance of way. You can also see the remnants of an old Conrail logo on the maroon car to the right of the loading machinery. There is also a Vermont Rail System car in the lineup, not to mention some covered hopper to the right. It was hard to make out from where I was standing, next to the fence. 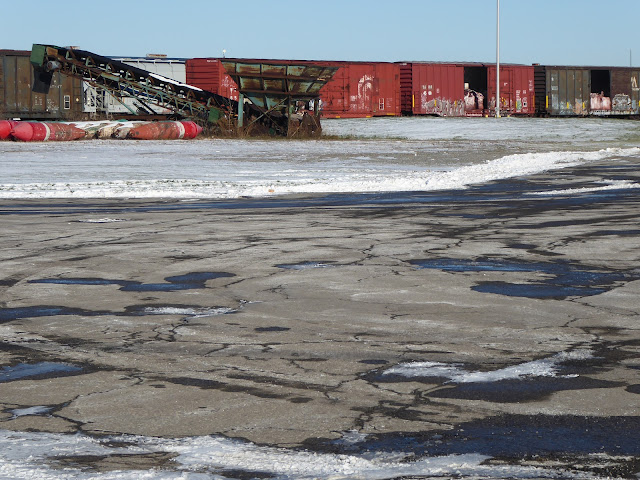 This shot gives you a better look at the faded Conrail logo, as well as the Vermont Rail System logo to the right. I still had a hard time making out what was loaded in the cars, although it looked like something bailed, like compressed recycled material or something like that. You can also see a group of buoys on the asphalt, likely due to the ice in the St. Lawrence River. Here's a blown up shot of the cargo. 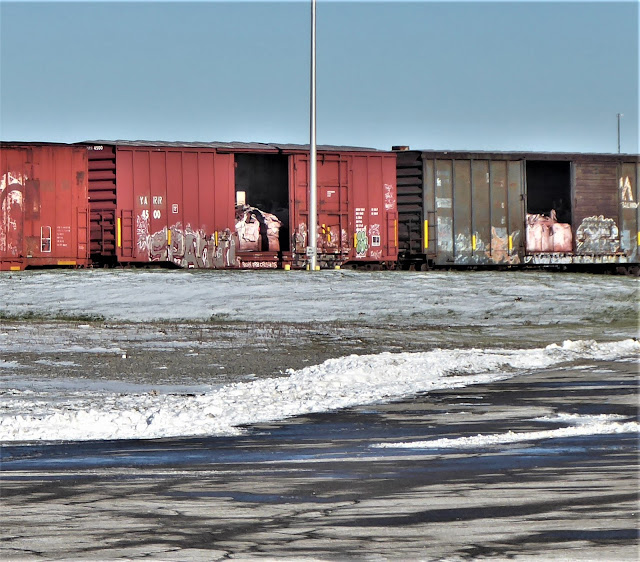 Here's a closer look at that MW car at the end of the line, which appears to have a rolling garage door installed at the end. Seems like this car is no longer fit for any revenue movement. 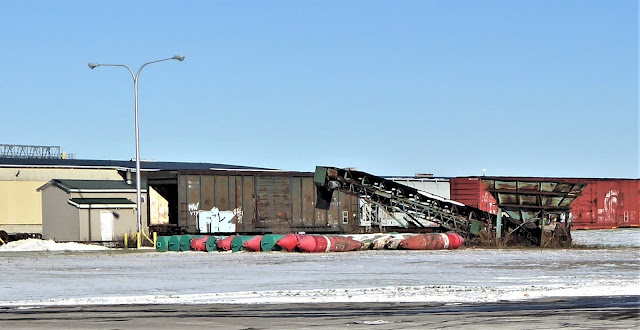 Here's where the story gets interesting. I was setting up to take more shots of various cars in the consist, thanks to my camera's zoom, but then I realized people working in a nearby building had taken an interest in what I was doing. I suppose that's natural, as this place is fenced off for a reason. I turned away from the fence and checked my phone, but the people in trucks on the other side were watching me like a hawk, so I decided, even though I was on public property, it was time to move on. I went back to my car in the parking lot, but noticed that the people watching me were not going to be satisfied until I drove away, which I did reluctantly.

There weren't any other obvious vantage points to view this rail yard and I was on the clock, as my kids needed the medicine, so I decided to move on. So ended my brief experience of photographing a new-to-me railway in New York state.

This is a good example of the type of railway photos I have come to appreciate more and more. There isn't anything exciting going on. There are no movements, no engines, no action. It's just a string of old boxcars. But I have come to realize that railway photography can be as much about where the railway is situated as what's on the rails. The background details provide more to the story and make the hobby more interesting.

Really neat post. I am in Ogdensburg now and again and while I see the tracks driving through town, I usually don't give a thought about the rail activity in the area. the trackage always seemed so neglected and overgrown from the main roads that I assumed it was sitting unused and forgotten about. I'll definitely have to pop by around the port next time I am there to see if I can see any activity as it would be neat to see some close by (well close enough) trains that aren't VIA or the rare CN for once.

Thanks AJ. I never know what to expect when I post something like this, which does not have conventional photographs or content. But, as you know, you have to take what you can get in Eastern Ontario and in Ogdensburg. In reading about this line, it seems as though it's busier than you would expect. I have never seen anything on the main line there, though.

That boxcar with the rollup door reminds me of a static boxcar in the NB Southern Railway McAdam yard. They took an old boxcar, repainted it in railway colours, and used it to cross-load pulp from boxcars to (from?) trucks through the stationary boxcar. They stored a forklift in the boxcar and built a ramp to it.

As for all the eyes watching you, I guess you can be on public property but still have a feeling of "wrongness" or not being welcome. Get your shots and get out! :)

Thanks Steve. I hadn't even considered whether that boxcar at the end might be used for transloading, but that's a definite possibility. I love catching old rolling stock. In this case, the old Conrail logo was the prize, along with that MW car at the end. I wish I could have had a few more minutes to explore more angles, but I didn't want to start an international incident.

I've been waiting for over 30 years to see action on the QGRY Lachute sub. I've driven from Masson-Angers to Lachute on dozens of occasions hoping to see something, but never have.

The closest I've come was a few years ago when I was golfing in Montebello and heard something go by. I was so close.

Pretty sure I'll have to give up and take pictures of rolling stock and be satisfied with that.

Take what you can get, Keith. I think these shots are an example of looking for the finer details and digging up the diamond in the rough, like the old Conrail boxcar.

I took the Dayliner to and from Lachute once. At the time, there were a couple of CP Service cars there, but not much else. Of course I photographed them!

Thanks for posting this perfectly mundane visit to a very interesting spot, Michael. It's something we so often overlook but should document.

Thanks Eric. Indeed, the mundane needs to be captured, in my opinion. It's part of my goal this year to broaden the conversation we have beyond the typical talking points like train number, engine number etc. There's so much more to this hobby that I feel requires attention.