The Ghosts of Bedell, Part II

As I mentioned in my last post, Bedell is an interesting spot on the Canadian Pacific Winchester Sub. It's an area that has rich history. Now, as much of its old infrastructure has been removed, it's also a testament to how railways have evolved. Small towns are rarely much more than a passing landmark to freight trains these days and Bedell is no exception. There are no diamonds here, the interlocking is long gone, the station is only visible in old photos and much of the former Prescott Sub connection has been removed. 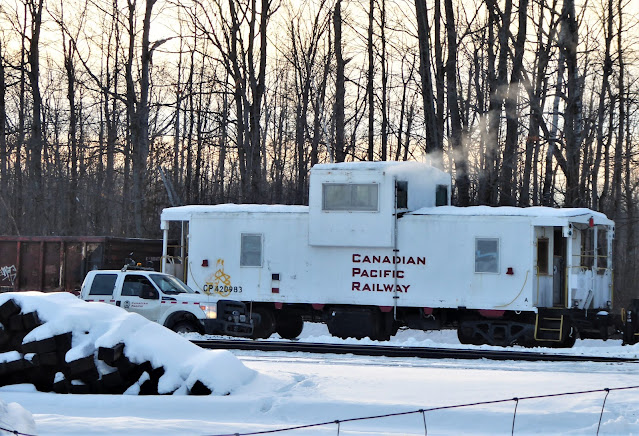 So what is there to see in Bedell these days? Well, in the last few years at least, there was a fair amount to see, to be honest. The Canadian Pacific has been very busy reshaping the Winchester Sub, which connects Montreal with Smiths Falls. The double tracks have been slowly merged into a single track governed by modern signalization. Bedell retains some extra trackage, as the railway still makes use of passing sidings, but most of the old remnants of the Bedell rail yard have disappeared.

The image above is a shot I took in February last year as maintenance of way crews continued their work in the area. Much of the consist was parked on the South Prescott Spur. The caboose, which had the modern CPR letting on it, seemed to be the crew breakroom, where they could escape to a warm place and get out of the howling winter winds. You can see the smoke rising the smokestack, indicating that there is something cooking or running inside the old car. The earliest photo of this caboose I could find was from 2004, meaning it's been assigned to engineering services for nearly two decades. 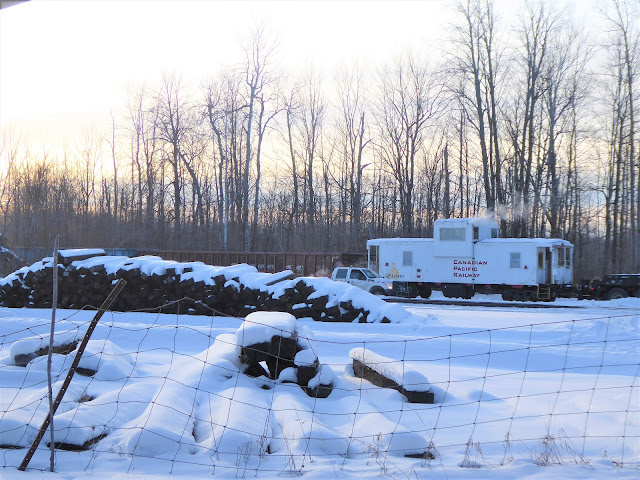 This shot above shows you a hint of the gondolas on the South Prescott Spur. The entire consist was being marshalled around by a flatbed truck equipped with flanged wheels for use on the rails. I was disappointed to see this. It would have been cool to see one of CP's old MoW locomotives on point, possibly with some old multimarks on the long hood, but it was not to be.

What's also striking about this image is the fact that so many old ties were piled up in the area. In the several times I have been to Bedell in 2020 and 2021, the amount of rail ties was pretty impressive. It seemed like this was the spot where many of the old ties were dumped. The shot below was taken in July 2020. This pile was just the tip of the iceberg. 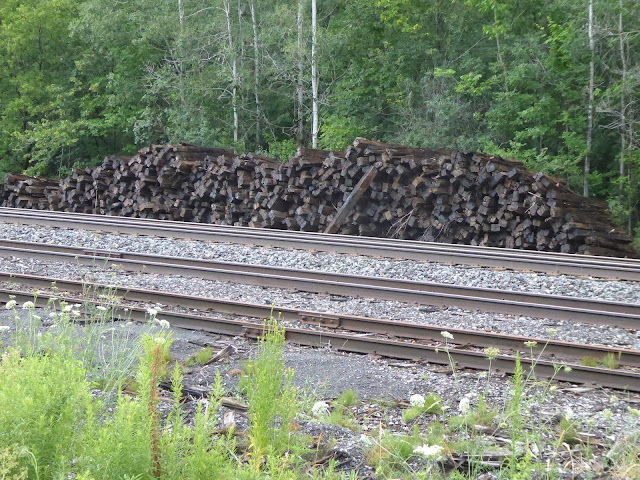 I haven't been to Bedell in more than a year to see what it's like these days, but seeing those cabooses when I did was incredibly gratifying, especially for someone who is old enough to remember when trains still had cabooses. I remember the debate when railways unions pressed their cases about the issue. I still have a pin somewhere that says "Trains are safer with a caboose." It was given to me by a Teamsters union representative that was pleading its case at a Sarnia mall in the 1980s. 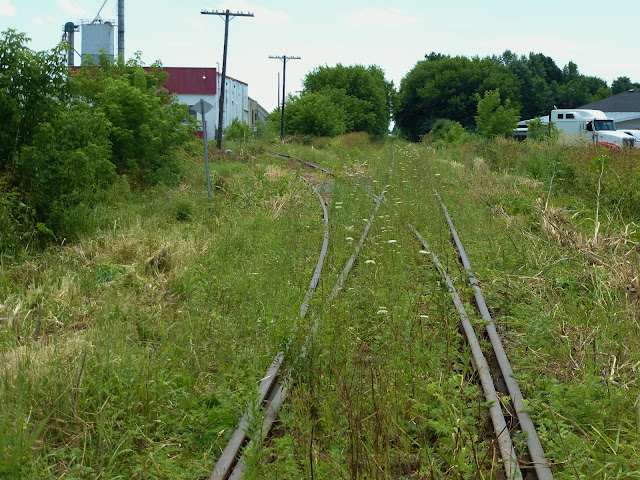 When you drive through Kemptville these days, you wouldn't know you were in a railway town. The last remnants of the old Prescott Sub were lifted shortly after I took this photo in 2014. In fact, you won't find that old industrial building anymore either. It's all been razed. Nothing but a flat expanse of development land for sale.

Despite the removal of much of the infrastructure at Bedell, it still remains one of my favourite spots to sit trackside. Go there in the summer and listen to the sound of the wind swishing through the trees. It's a very peaceful spot. Catching a train there is tough, given the decreased frequency of traffic, but the newly installed modern signals will give you some clues. You can see these signals safely from the Bedell Road crossing, which might be able to let you know if you will be waiting an entire afternoon or whether you might be in luck.

You see? Progess isn't so bad.

Those piles of ties are hidden and dispersed like American tanks before D-Day. Riding VIA to Toronto, wherever there's a siding in the woods, there is a formidable pile of ties, on CN and CP. Someday they'll do something with them!

Thanks for sharing these Bedell memories, Michael.
Eric

I have several photos of these massive stacks of ties. It was certainly a convenient spot to store them. There remains a wide right-of-way in this area, which the railway still uses for fenced-off storage. I will return to Bedell later this year, as our family has a long appointment in Kemptville. Some bonus time along the CP tracks!

Thanks for this!
Its been amazing to see how much has changed in such a short period of time. Bedell is one of my favourite spots as well. Its fairly close to home (although providing a nice drive on the backroads), decent sight lines and easy to pull over with it being on a quiet side road. I just wish it was busier!