This March, while I was visiting family in the Sarnia area, my brother and nephew took me on a tour of their favourite spots in the area, including many railside haunts. On our way home, we saw a CN train perched near Telford Road, just east of the limits of Sarnia Yard. My nephew was excited by this slow moving train, as we had not seen any freight trains at speed during our day of railfanning in the area. This was the train as it approached the crossing and then stopped. Note that the Strathroy Subdivision is double-tracked here, and there are trains on both tracks visible in the image below, taken from the Confederation Line.

Just a few minutes earlier, we had left Sarnia Yard, where another freight train, this one heading west toward the Paul Tellier Tunnel, also stopped before proceeding down the grade to the tunnel. A few railfans in the parking lot explained to us that the train was backing up and proceeding forward for a reason. At first, I'll admit that I was curious as to why this train would be doing this, unless they were assembling part of the train that I could not see. The railfans said they were "x-raying" the train. I'm not exactly sure that is the right term, but the sense I got from what they told me was the the train was being scanned before it headed into the United States. Here's a shot of the consist inching forward. 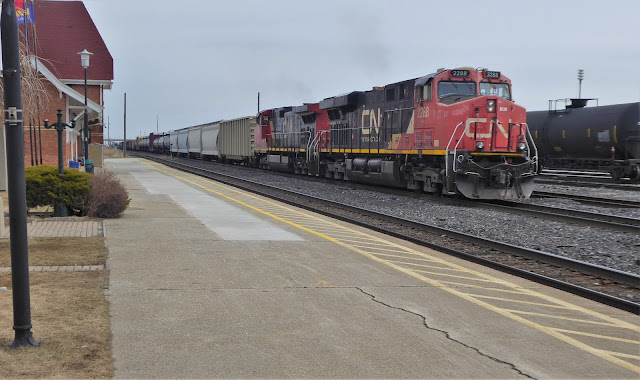 At either end of the yard, there were two enormous freight trains, one due east and one due west. Neither was moving. I joked to my nephew that it was a genuine rail traffic jam. Of course, this was not the case, as precision scheduled railways do not usually have trains with massive dwell times taking up space in congested rail yards. Sarnia Yard usually has its share of cars in the yard, but it's never what you would describe as congested or backed up. The blocks of cars appear very organized, at least to my untrained eye. Still, it was an odd sight to see two freight trains, on both tracks on the main line, apparently motionless.

Moving back to the train due east near Telford Road. Here is a shot as it moved ahead past the end of the westbound train from the image above. I find it interesting whenever I see autoracks behind the engines. It's not something that was terribly common when I was growing up. These cars always seemed to be blocked onto the end of a train. Not the case anymore. 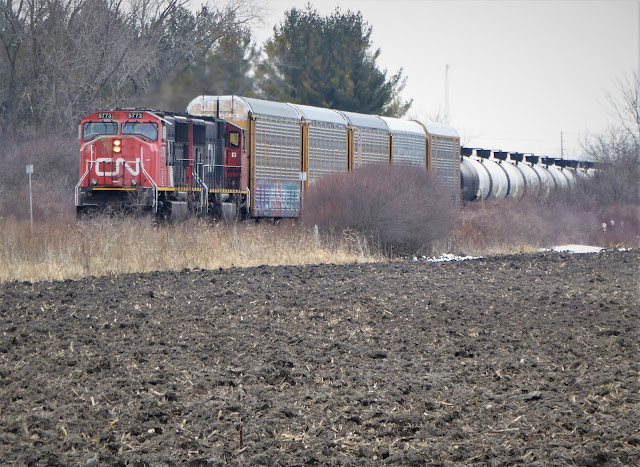 You can see in the image above that the fields looked to be almost ready for planning, even in mid-March. Going back to the westbound train, which we watched for awhile before giving up, here's a shot of the head end through the gantry, which governs trains movements around the tunnel. The bridge also controls the connections to the converging St. Clair River Industrial Spur (and by extension, the CSX Sarnia Subdivision) and the Point Edward Spur, both of which merge into the yard west of these signals. 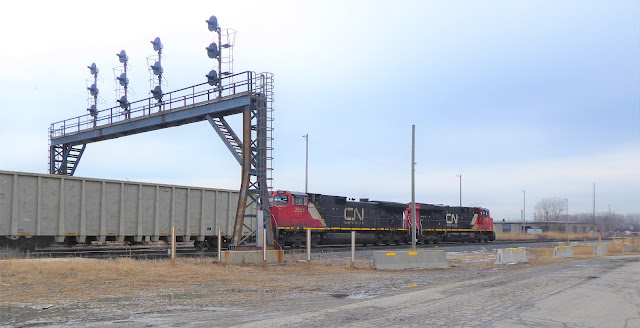 While I was at the yard, I did spy a tank car that had an old logo on it that is not terribly common these days. I remember these CGTX tank cars when I was younger, but they have slowly disappeared over the years. It was cool to spot one. I know it might seem like a mundane image, but I think it's more important now to capture images of old rolling stock than ever. 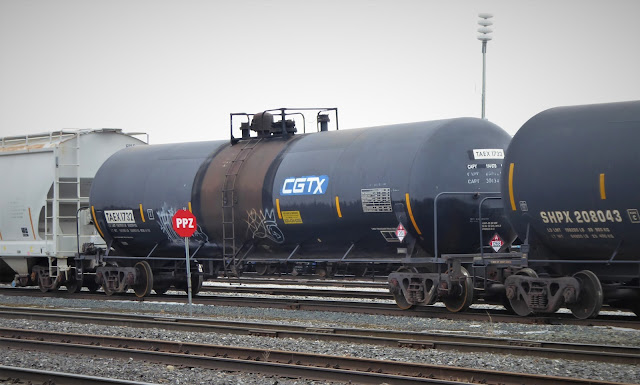 These images we got from the yard and from Telford Road rounded out a great day or railfanning, even if the actual number of trains we saw was pretty light. You can check out our other adventure from this day in the post Next stop: Glencoe. 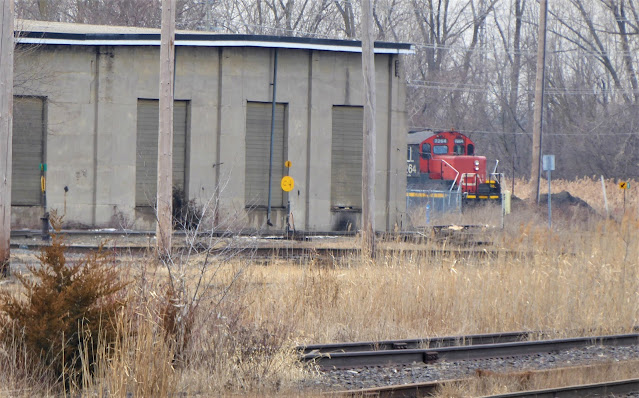 One last shot of an old GP9 idling behind the old roundhouse. This engine is on the approach track that trains off the St. Clair River Industrial Spur and CSX Sarnia Subdivision use to access Sarnia Yard. Sadly, this engine didn't move either. It seemed like a gridlock kind of day when nothing was moving. My nephew wasn't thrilled. I was just happy to get a few images.
Posted by Michael at Thursday, July 14, 2022

Hi Michael - Nice photos, as usual. The "X-Ray" system is officially known as VACIS (Vehicle and Cargo Inspection System) and we have one here in Windsor as well, somewhere along the CP line that leads to the rail tunnel under the Detroit River. Here's a short article about it from Progressive Rail back in 2004. https://www.progressiverailroading.com/rail_industry_trends/news/CPR-Canada-to-fund-cargo-inspection-system-at-Windsor-Detroit-border-crossing--7674 I made a very brief visit to Ottawa a couple of weeks ago to visit family. You're certainly right in that you can crisscross the entire city and never actually see a railway track, which begs a couple of questions: 1.) How exactly does the Arnprior Turn make its way from Walkley Yard (on the east side of the city) to Kanata (on the west side of the city)? Where are the tracks? I actually tried to follow the route using Google Maps satellite images, but I lost sight of the tracks in what looked like a residential area somewhere. 2.) Besides Arnprior, where else can trains go from Walkley Yard? When those tank cars leave Ottawa, where do they go and how do they get there? 3.) When I used to visit in my younger years, there was a fairly modern looking concrete railway bridge that carried tracks over Merivale Road between Viewmount and Colonade Road. I'm told that's now part of a recreational trail. Who owned those tracks and where did they go back in the day?

Wait, I see it now. The bridge over Merivale still has tracks. That must be the Walkley - Arnprior link. The Nepean Trail is just a bit to the north. There seem to be a handful of funky little industrial spurs between Walkley Yard and Merivale Road. Do they originate any traffic? Do the outgoing freights from Walkley head east to Montreal or southwest to Toronto?

Thanks for your comments Kevin. To answer your questions, trains west to Arnprior take what's commonly known as the Walkley Yard trackage west to a junction near Colonnade Road called Federal. You can see this track on Google Maps at Bank Street. This is where the Walkley lead west crosses the O-Train Trillium Line (former CP Ellwood Sub) Federal this is the spot where the Via Smiths Falls Sub and the CN Beachburg Sub merge. The train then heads down the Beachburg Sub until it becomes the Renfrew Spur, all the way to Arnprior. To trace this spur, start at March Road in Kanata where it meets Carling Avenue and you should be able to see where it goes both east and west. There are a few spurs in the west end. The only ones that require servicing to my knowledge are on the Smiths Falls Sub (Kott Lumber and SynAgri). There may be others that require cars on an as-needed basis (NRC facility is a good example, which is connected off the O-Train Trillium Line).

Most of CN's traffic in Ottawa heads east on the Via Alexandria Subdivision toward Vankleek Hill and toward the old Ottawa-L-Orignal Railway, which branches off the Alexandria Subdivision at the Glen Robertson Junction. All of Ottawa's freight cars originate at Coteau in Quebec, where a CN local does weekly pick-ups and drop-offs for the cars needed for customers in Eastern Ontario.

The eastern half of the CN operation here is a bit mysterious to me, but I do know they serve Ivaco Rolling Mill near Hawkesbury. That's a major customer.