I finally made it to the east side of the city, which is no small feat, given my schedule and my west end location. But, on the Mother's Day weekend, I couldn't pass up the chance to check out what was happening at Ottawa's Central Station on Tremblay Road, hoping maybe to catch some of the new Siemens equipment. A guy can dream, right?

I had my oldest daughter in tow as we made our way to the station. It's been a while since I've been here, because the last time I was trackside, there was no chainlink fence protecting the tracks from the parking lots. I found this odd for years, given the priority railways place on security, but Via Rail has clearly stepped up security. What is great is that there are numerous gaps in the fence, which are perfect for squeezing a camera through. I'm sure they serve an official purpose, but I was happy to see them there just the same.

First things first, I tried to shoot a few shots between the wires that block much of the view from the Belfast Road overpass. There were a few corridor consists parked on the station tracks, with no diesel engines operating. It was a quiet Sunday morning at the station for sure. This shot below was the one I thought turned out the best. 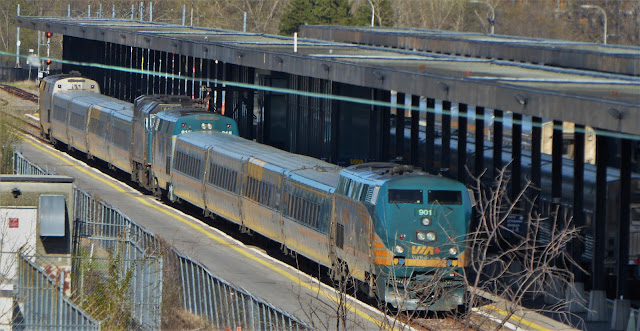 You can see from the image above that there are two consists back-to-back, with one double-ended by P42s minus the Via "love the way" wraps. The other consist has a wrapped P42 as well as a F40PH-2 in the typical modern Via colours.

My daughter even tried her hand at getting a shot of the train on the next track, which you can see between the pillars of the platform in the above photo. Her photo is below. It turned out better than my shot from the same vantage point. I love those old streamliners. Catch them while you can. 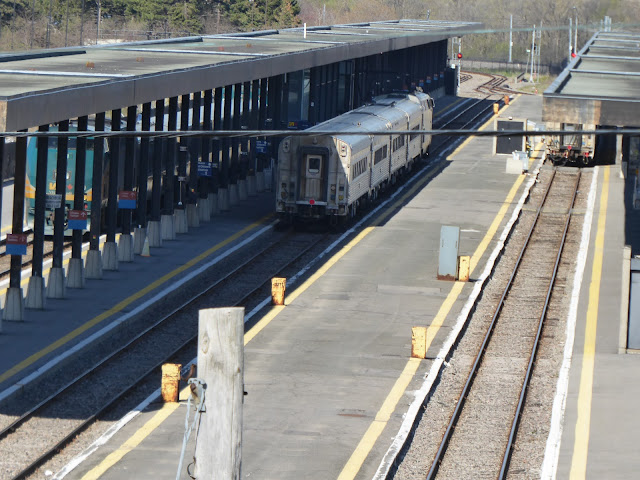 We decided to try and shoot through the fence trackside next, so we made our way from the Belfast overpass to the parking lot beside the tracks. A few shots turned out okay, after a little photo editing got rid of the immense morning shadows cast by the platform canopies. Below you see the same P42 bookended consist minus the wraps next to a Budd consist facing west on the next track. 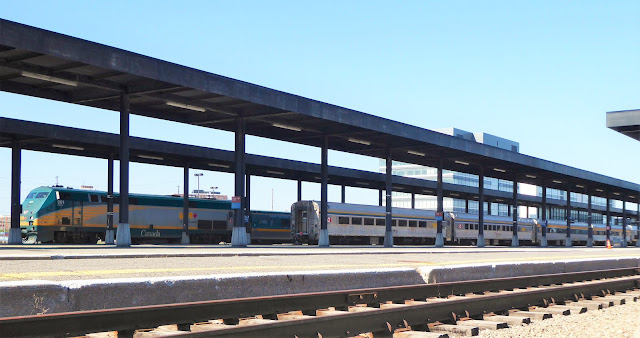 I also decided to get a shot of one of the streamliners, because, well, just because. 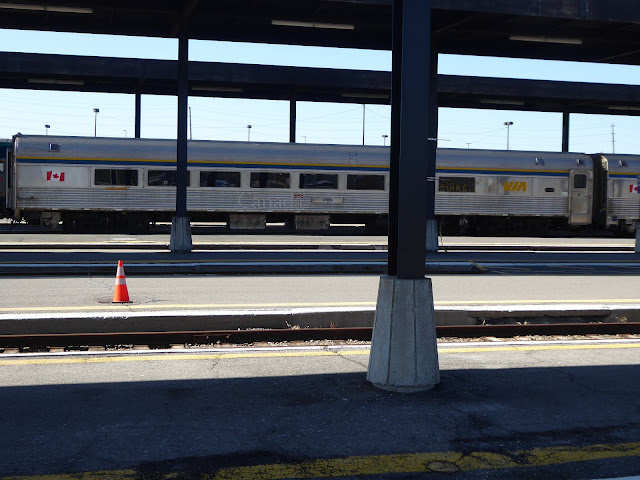 I also tried to get a shot of a few trains overlapping. This one turned out okay. The door to the Via Business Class car was open. It was really tough to work around the shadows. 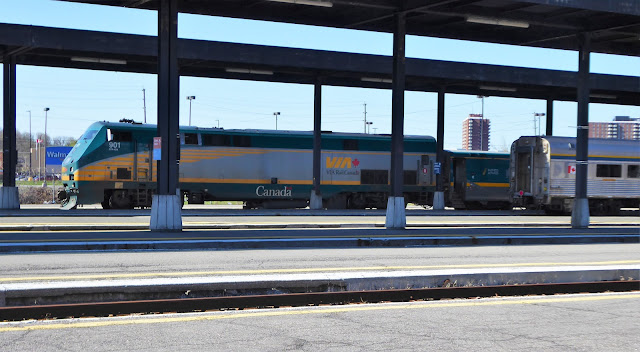 As my daughter has not been inside Ottawa's main station in quite some time, we went for a stroll along the concourse. It is a really beautiful station, by modern standards. I've always liked it. Even in the winter, it has a warm feel to it. On a whim, I decided to see if there was anything to capture closer to the tracks. I didn't figure there would be anything worthy of sharing, but then I came across this convergence of three Via locomotives, framed by the station's steel girders. 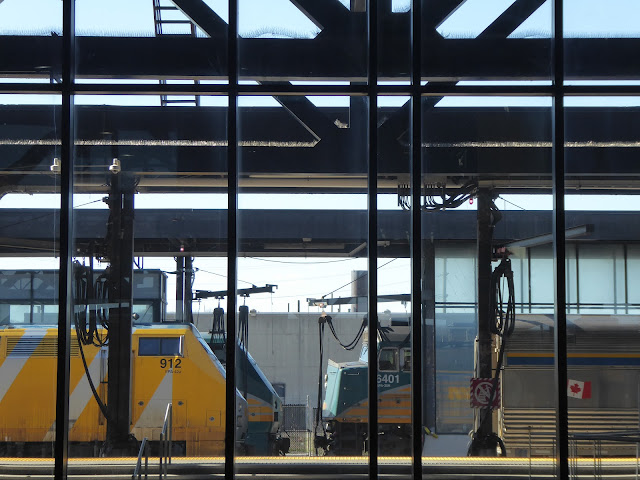 In this image, you can see an old F40PH-2, two P42s, each with a different Via livery and even a piece of an old streamliner coach in the original Via colours. If you look closely, you can see the inverted Via logo reflection next to the old coach. And, unlike the shots I took outside, this shot wasn't totally dominated by shadows. I don't know if the Ottawa platform will ever yield shots as dramatic as you can get at Toronto's Union Station, but I think this might be as good as it gets (for me, at least).

It ended up being an unexpectedly fruitful window of railfanning. I even captured a quick shot of the O-Train passing under Tremblay Road. The cynic in me was about to muse over how surprising it was that the O-Train as operating normally, but I resisted the urge to say this to my daughter. This vantage point on Tremblay Road is a great spot to shoot. 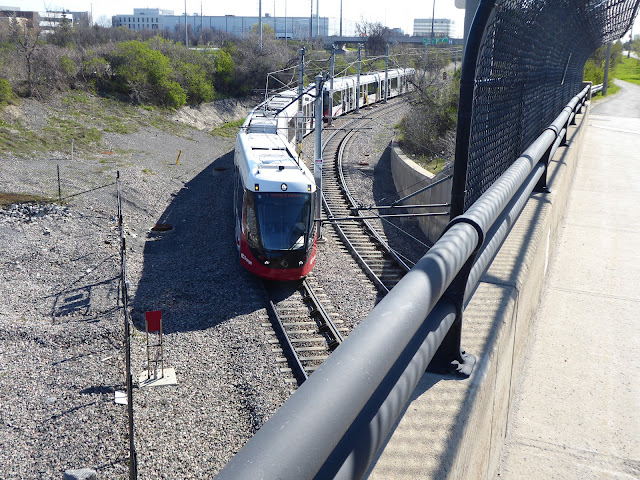 So that was my quick trip to the train station for the first time in several years. I managed to get quite a bit in, considering there were no trains coming or going at the time. It was surprisingly enjoyable to share this experience with my daughter, who is nine years old (almost ten) and still willing to tag along with me on a Dad adventure. All in all, a great day that made me grateful for Ottawa's Central Station.

Great photos and a nice outing!

There's a story behind why I was in the east end to begin with, but that's another blog post. It was an unexpectedly nice little adventure, which was made better with family.

Thanks for sharing, and for finding those photo angles, Michael!
Eric

Thanks Eric! I love the Ottawa Station. It's a modern classic. It's always a challenge to find something new and avoid the shadows at the same time.

"I finally made it to the east side of the city, which is no small feat," Yeah I know what you mean! I try to scheduled out anything I have to do east of Pinecrest on weekends or evenings so i am not taking 45 mins to get from Kanata to St. Laurent.

Anyway seems like a great outing you had with your daughter! Glad you got those streamliners. I feel like there are not many opportunities to see those in the city left. Your right on the money to see them while you can!

Love those station shots. Ottawa's Station is so underrated. Granted I would have loved to see the downtown union station in action but happy we ended up with this as a replacement.

"how surprising it was that the O-Train as operating normally"....wait, they're running again?

How was the Tremblay Road overpass for shooting? I drive by there once in a blue moon and wondered if it would be a great place to grab OTrain shots but always thought it seemed too much of a pain to get to and not worthwhile to bother.

Hey Michael the new Line 2 Trains are stored at Walkley yard just off the Albion Rd S entrance behind the former ocr Shop ps email me at ccarlson953@gmail.com asap