Something New! A chance meet with a freight train in Carlsbad Springs

Happy New Year everyone. I know it's likely a little late to be wishing people this, but this being the first post of 2022, you'll have to indulge me. This is the time of year when I usually force myself to head out and get some winter photos to share. Now that my children are home learning virtually, I find myself with almost no time to even think about trackside adventures. And since my wife works weekends, it's not looking good for railway photography in the short term.

Luckily, a good friend of the blog, Keith, had a surprise in store for me in late December. Keith Boardman is a fellow railfan.As an added bonus, Keith has been this blog's unofficial east Ottawa correspondent since our early days. I will readily admit that I have not been able to chronicle anything of note on the Alexandria Subdivision beyond Belfast Road. That's mainly due to the fast that I live in west Ottawa and I am busy enough with work and family that catching any rare freight train in east Ottawa is a challenge. Also, for those not familiar with Ottawa's geography, Ottawa is one of the biggest cities in Canada, geographically speaking. It's actually the result of an amalgamation of 11 former municipalities that once formed the old Carleton County (later the Regional Municipality of Ottawa-Carleton). So it's a big city that requires a lot of driving, just to get to places like Carlsbad Springs.

Keith had a chance meet with a CN freight recently, but I'll let him explain it in his own words. Read on:

I was passing through Carlsbad Springs at 8:28 this morning (December 20) and the signals came on as I was about to cross Piperville Road. I know there's a westbound Via that goes through around 8:05 give or take, but didn't think it would be running that late. A Railterm truck was parked on the side near the crossing and a worker was out of it, so I assumed he was testing the crossing equipment. 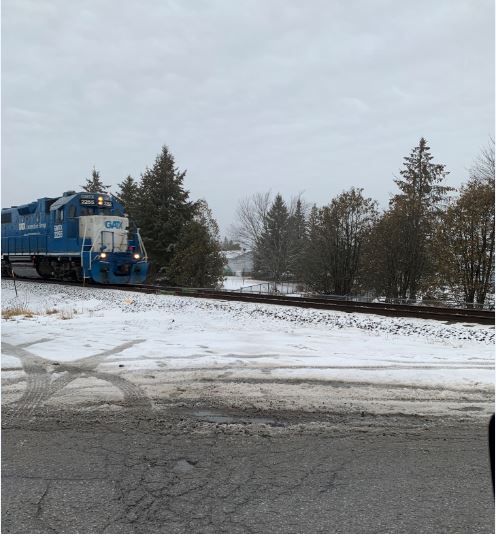 It seemed he wasn't, so I looked down the track towards the siding,and I could see a light, with ditch lights coming through the fog. Turned out it was the blue and white leased unit, with a second power unit in tow. I couldn't get a very good pic as the Railterm truck was immediately to the left of my view of the approaching consist. 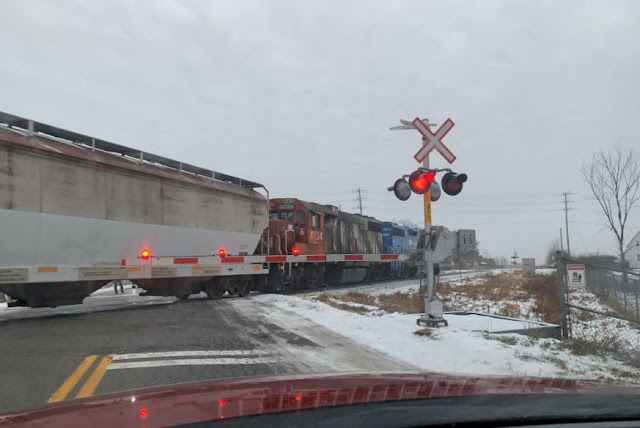 Thanks to Keith for this unexpected surprise.

You can see from his second photo that this consist included a beat up old CN geep that was still barely sporting the sergeant stripes. I was wondering why CN was still using a leased unit in the area. A few readers suggested that the railway is short on four axle units, which would be the only thing that could be used on the Renfrew Spur. Also, I can't imagine the railway would want to waste of more modern six-axle unit on its Ottawa operations, which don't seem to be much of a priority.

It does seem like CN is short of 4 axle units. Since the retirement of the GMD1s and most if not all GP9s, all they have are GP38s. Here in Winnipeg, most of the hump units are now SD40 variants and the GP38s are doing industrial switching, jobs that a GMD1/GP9 pair used to do. We don't have any leased blue 4 axle units here (yet).

The 589 is an interesting consist at the best of times. I caught up with it again one evening last week as it headed west back into Ottawa from wherever it comes from. Sometimes it has as little as 2 or 3 cars, and other times, it has as many as 30.

The catch this week had 2 units for power (the leased unit was one), and somewhere near 30 cars, with a mix of everything included.

The remaining GP9s must all be in yard service in Sarnia. They're still powering through that yard, making lots of smoke.