Ah, to go back in time and right past wrongs. I often think of my time in Kitchener and kick myself for not using that time to capture the then-Goderich Exeter Railway Guelph Subdivision action. I lived in KW from 2007-2009. The only train photograph I came away with was a shot of the trestle over Kolb Park on the city's eastern boundary. You can check that photo out in this post. Since living in the city, I have had very few opportunities to return. I did go back in 2018 and managed to catch a few really cool things, which are even more meaningful now that GEXR is but a memory on the Guelph Sub. You can check that post out here.

This is all a very long-winded way of introducing the second part of my Hide and Seek posts. Hide and seek is really just a fancy way of putting a name to my maddening pursuit of railway pictures from the passenger seat of my car when my family is driving on Highway 401. This summer, my family made two trips to Southwestern Ontario and saw a few things on the way. The second trip was much more fruitful, but I want to focus on one area where I never expected to see anything, but I did.

When you are travelling westbound on the 401 through Kitchener, you don't have to wait long once you exit the 401 and drive onto Highway 8 before you might see some trains. You have to look to the right of your car as you head into Kitchener (west). If you strain your eyes and you are lucky, you will see the Canadian Pacific switching, mainly autoracks.

You will notice that this is not much of a photo. I had to blow it up, sharpen the blurred lines and crop out the extraneous highway dividers. But it feels so good to earn a bonus shot, especially for me, since I so rarely see freight trains and CP freight trains especially. You can even see a hint of some golden farm fields in the background.

I almost came away with a brilliant shot, but then this happened. The shot is pretty sharp and there would have been nothing blocking my view of these distant engines, but then the dump truck ruined my shot. Taking shots from a moving car is the definition of crap shoot. You never know what you are going to end up getting or just narrowly missing. Hence, hide and seek. Sometimes, you get something and sometimes, it all disappears in a flash. 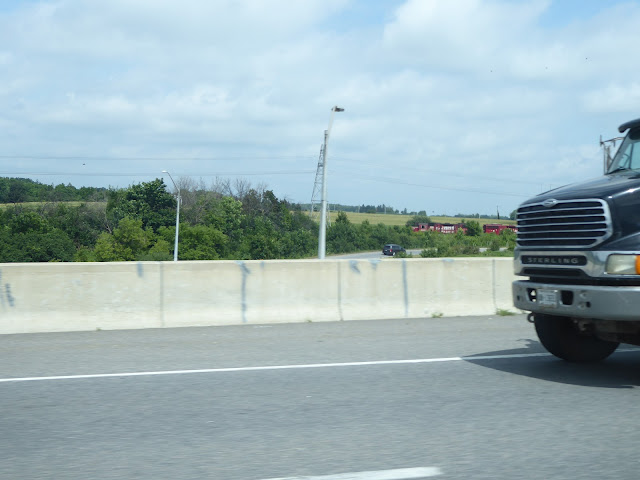 But I was happy to get anything, to be honest. When I lived in Kitchener, CP was a busy railway in and around Cambridge, which is on Kitchener's southern border. CP switches for Toyota in Cambridge, along with a number of smaller light industries in the area. But, the automotive production plants are its big business here. The railway built Wolverton Yard specifically for its flourishing autorack business at a time when it was not really in the habit of such capital expenditures. The yard handles Kia and Hyundai distribution, as well. I do remember when I was covering stories for the Record newspaper in Cambridge, I would sometimes happen across CP's switching moves and my eyes would linger for a moment. There are some great spots in Cambridge to watch local switching. Alas, I never took any photographs.

I knew I had to be aware when we pulled into Kitchener on Highway 8 this time around, since I first noticed the CP switching moves last year when we travelled the same stretch of road. This year, I was ready and I was lucky enough to see a train once again. Great train karma for once!

The shot above is not bad, all things considered. You can see that the head unit, GP38-2 3118, is in need of new paint. You can barely see the Canadian script or what's left of the golden rodent. I wasn't able to get a clear shot of the second unit, which looked like it had newer paint. Considering how few CN geeps I have seen (excluding the GP20ECO rebuilds), I was happy to see this old warhorse.

This shot below is the one image that was clear enough to allow me to identify the one unit. As you can see, much of the train is obscured, but that's how this game is played.

It's not much, but when you see as little as I do, every small victory counts.

Nice catch! It's definitely a challenge photographing from a moving vehicle on the highway.

I love the challenge, although the outcome is less than ideal.