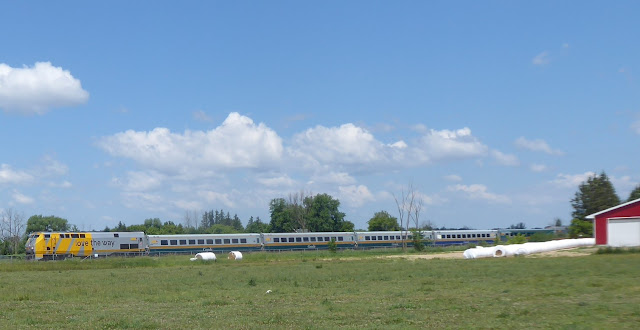 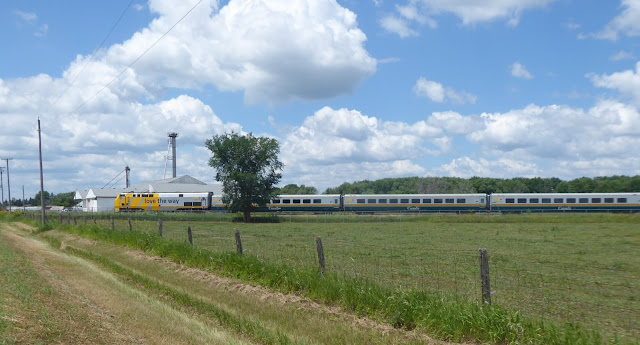 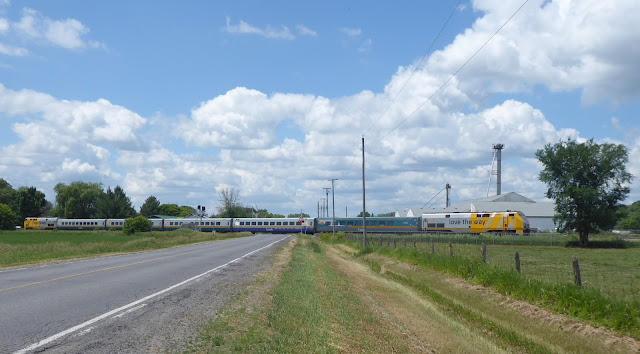 Thanks for your comments. I'll try to keep this thing rolling.
Posted by Michael at Saturday, July 11, 2020

Glad you came back so quickly! I need my train fix, regardless of how minimal it is. Is it just me or do your shots almost look like the head end could be an LRC?

My morning commute takes me on Ramsayville Road, and I typically catch a Montreal to Ottawa VIA rail around 8:15. Haven't seen it in months, as I think there is little more than 1 train per day in either direction.

Thanks, Keith. I'm trying my best to find some interesting tidbits to get me through to a more normal time. As you said, even the Vias are getting scarce in Ottawa these days. Makes it hard to put anything together for the railfans up here.

You are definetly correct that the P42s have many unflattering angles. I find that problem is compounded by all of the bumps and bruises on their noses. The F40s seem to hold up better, or have been recently fixed up. :)

I think that a shortline operator being contracted for the services in the Ottawa area would be a positive outcome (and most probable). If {City buys the CN portions of the Beachburg, Nylene buys the rails, and the municipality buys the Vankleek Hill}, an operator could probably make a go of it. Using nothing but pure speculation, I'd say Cando would be most likely, with G&W being a long shot.

I've noticed that the rail yard in Johnstown is very busy these days. I've often wondered if CN is using it as a transfer point for freight to Ottawa for loading of trucks. For instance, I think that the rails for the O-Train projects were shipped there, then trucked north on the 416 rather than brought into the city by train.

Welcome back! I like the last shot the best... that road leads right into the full train. Great photo.

I haven't seen enough P42s to hate them yet!

Thanks, Steve. I have hated the P42s since day one. The front end is just hideous to me. I find it very interesting to read that the fronts of these locomotives were the result of a compromise. The engines were supposed to have a different look. If only...

I can't seem to understand your optimism regarding freight in Ottawa. Ottawa Central couldn't make it work, CN couldn't make it work. There really isn't a business case to have a freight railroad in Ottawa. A lot of the optimism around the operation here is based on pure speculation, but the cold reality is that nobody has expressed interest in the operation and it is unlikely anyone will. The default assumption should be that this operation will disappear entirely because of the numerous times operations like it have done so in the past.

Thanks for your comment, but respectfully disagree. Ottawa Central got caught in the Great Recession and was given an offer they couldn't refuse at the time. A new short line would have significantly lower overhead (almost no track to own and maintain) whereas OC had the entire line to Pembroke to maintain, not to mention its other properties inside and east of the city. And, as for CN, I don't think it's a matter of the company not being able to make it work. CN doesn't want to make it work. Their focus was likely never on this operation. They don't run short lines. And, as readers to this blog know, the former head of OC, James Allen, told me in an email that there is a strong business case to be made. So, that it the reason for my optimism. Of course, your skepticism is not at all unfounded. We're hardly a railway hotbed here.