May you live in interesting times, or so goes what many feel is a Chinese proverb or curse. We do live in interesting times in Canada. For those of us in Canada who like to sit trackside, it's been a long few weeks. I have mixed feelings about everything that has happened in this country that has ground rail traffic to a standstill in many parts. I won't get into it much more than that, because this is not what this blog is about.

Recently, my daughter expressed an interest in astronomy, which is why I drove her into the countryside on a Saturday evening to look at a few constellations and planets just after sunset. We brought a pair of binoculars, which are surprisingly useful for stargazing.

On our way to our spot, I noticed the signals at the Twin Elm crossing were showing green for westbound trains, which I found odd. As far as I was concerned, nothing was moving on the Smiths Falls Sub, due to the blockades.

Well, on our way back home, I got my answer. I double-ended Via Rail train was making its way west through Twin Elm, which had me confused. I brought along my camera, which I usually do when I know I will be near a rail crossing. The train was making its way to the crossing much slower than it usually does. So I propped my camera on my driver's side mirror to ensure any shot I got was somewhat clear in the dark. (Always find something to use a tripod, if you can. I learned that trick very early on) 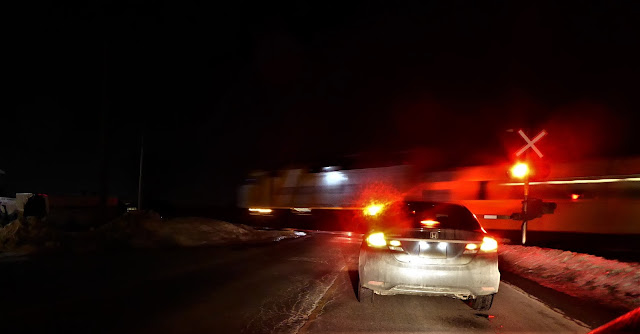 This was probably the best shot of the tail end of the consist (above), with a wrapped Via Rail F40 wearing the "Love the way" slogan on the side. I didn't have time to switch my camera to its night settings, which would have helped the shots, no doubt. But, then again, this was really a surprise meet. 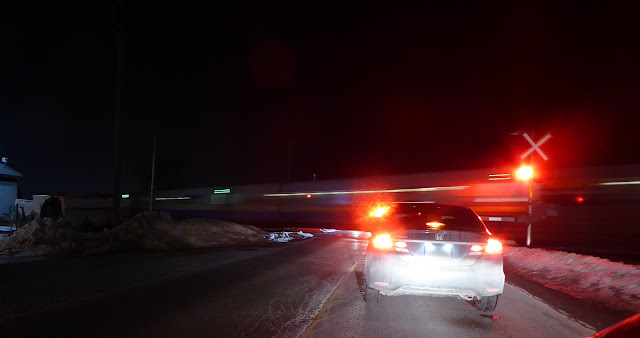 I think I like this shot the best because it shows the blurred strip of lights coming from the LRC coaches. The entire train was made up of old LRC coaches, still bearing the Via Rail blue and yellow livery, which I appreciated. I have seen many many shots over the years of nighttime rail photography where a train appears as a blurred lines of lights. I wondered if I would ever get the chance to capture these types of shots. Quite by accident, I was able to create a first attempt. It's not perfect, but it's a start. The lights from the crossing gate and signal really flared a fair bit, which I tried to fix with some retouching, but this was the best I could do. 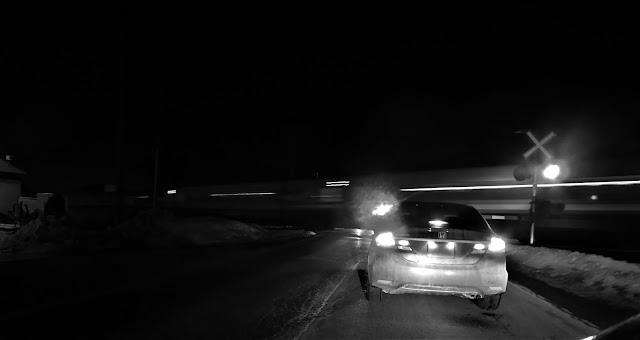 When reviewing the shots, I decided to make one of them black and white to see if it added to the scene at all. I'm not sure if it made the shot better or worse, but it was worthwhile experiment nonetheless.

So, it was a little bit of magic on a night when my focus was trying to teach my daughter what little I know about the night sky.

I did notice that, after the blockade was removed near Belleville and freight traffic began moving again on the CN main line, someone went to Walkley Yard and took shots of the local CN crew putting a train together. This video was posted on Facebook. I have to say, with respect, that taking shots from the service road next to Walkley Yard is probably not a great idea. That road is private property past a certain point, which puts you in danger of being charged with trespassing. There are Ottawa Police and private security guards watching this area a fair bit.

It's not worth it.

Nice shots! Using a part of your car as a tripod is a smart idea. It's pretty essential for long exposure photography to have some kind of stability. I've sometimes thought my hands were steady enough to hold a camera for a second or two, but they just aren't.

I agree with you that shots like aren't worth the risk... especially these days where security people are going to be on high alert. Keep it safe and stay well back from the tracks and make it obvious that all you're doing is taking photos from public property.

Thanks, Steve. Much of my early education in photography occurred when I was a rookie reporter with a small town newspaper. A veteran photographer told me two things. When in doubt, get closer and always try to find something to use as a tripod when you don't have one. That has served me pretty well.