Camlachie Road: One of my new favourite spots to catch a train

The older I get, the more I tend to shy away from railyards. When I was younger, I loved having the chance of visiting a yard, because it usually guaranteed that I would see something. These days, I am constantly in search of more rural or interesting urban settings when I do find myself with time trackside.

Case in point. This summer, I visited family in the Sarnia area and really wanted to catch some action trackside, but I was also looking after my two daughters and my nephew for the week, so I knew I would have to get creative. My nephew was game, but I know my daughters would not likely have the patience to sit trackside for long. So I made sure to plot my routes for the week around as many rural crossings as possible along the Strathroy Subdivision, in the hopes of catching something.

One advantage you have in this area is topography. When crossing the tracks in the countryside, you can slow down and see clearly what is (or what isn’t) coming. Twice during the week, I saw the familiar headlights far down the tracks, which gave me time to set up and get some shots.

The first time I caught something was when I was on my way home with my daughters, after we had spent the day with my sister’s family in Corunna and were heading back to my brother’s house, where we were staying. When we crossed the tracks, my older daughter was quick to point out a train was coming. In this case, it was an eastbound freight coming out of Sarnia heading toward Toronto. I had to find another road to set up, since the road we were on had no gravel shoulders and was a bit too busy to take pictures safely. So, after some scrambling, I found a spot along Camlachie Road, a spot I have used in the past (which you can read about here), which has a great vantage point for westbound freights. 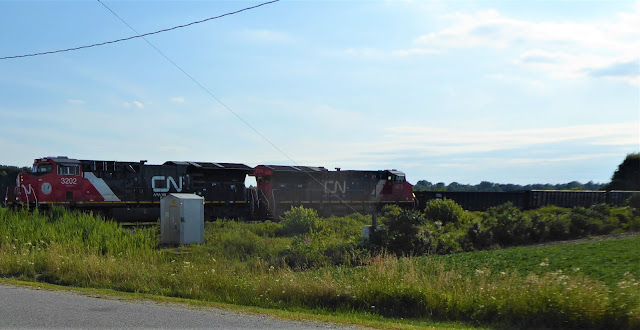 The train was travelling a lot faster than I had expected, which required some quick decisions and set up before I could fire off some shots. Sadly, I had to settle for the shady side of the train, which necessitated a fair bit of colour correction. 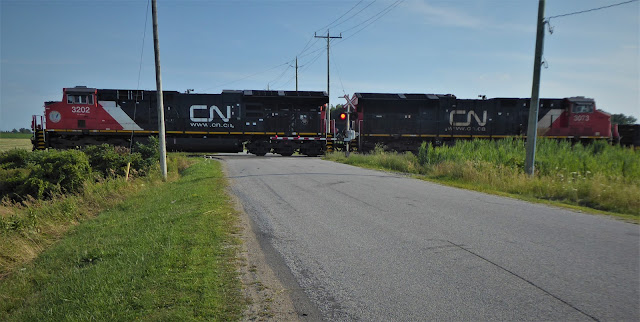 The first unit, ES44AC 3202 sported the Indigenous Peoples logo on its nose, meant to honour Canada's Inuit, Metis and First Nations. I've come across this logo a few times this summer. The trailing unit was ET44AC 3073. In other words, there was some serious power on this train. 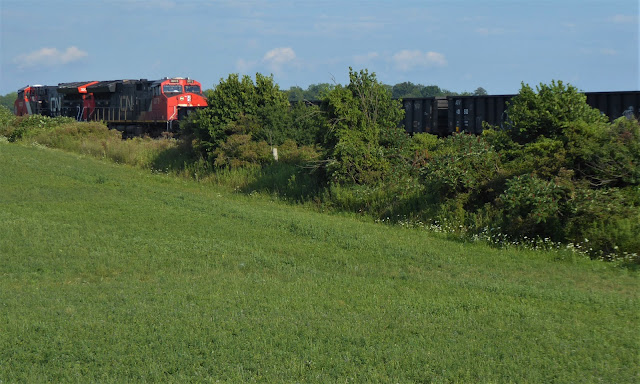 Given that the sun was not making things easy for me, I tried a few going away shots and was happy with the way the sunlight was reflecting the front of the trailing unit. You can see that the growth trackside certainly makes it a little tougher to shoot a passing train with much detail. To me though, I thank the landscape is just as important as the train. I don't mind images like this where the train blends into its surroundings. 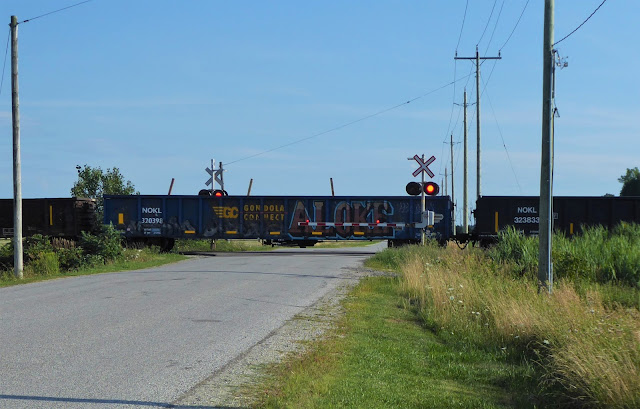 So, once the front end of the train was properly documented, I turned my attention to some interesting rolling stock. It seems like most cars these days are owned by leasing companies, which makes finding an old gem from a fallen flag harder than ever. However, I did like this gondola, graffiti aside.

I also liked the way these empty lumber cars allowed me to see through to the other side of the tracks. This was a mixed freight in every sense of the word. Some cars were empty... 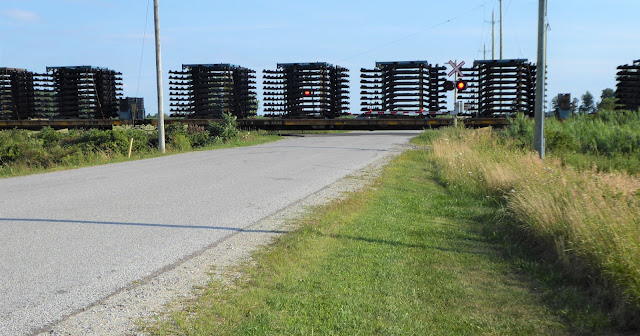 And some were obviously headed for unloading. These chassis appear to be headed to one of the automotive plants that still makes trucks in Ontario. My brother and I were trying to figure out where. I speculated that they might have been going to the Oakville Ford plant while my brother thought they might also be going to Oshawa, as that facility is still in production for now. 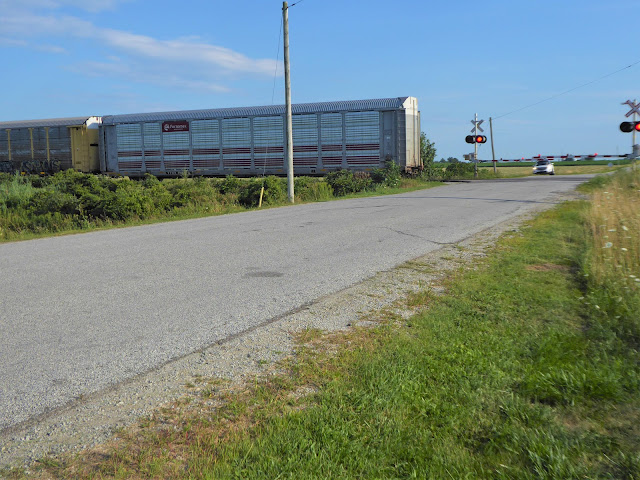 The train ended with a long string of empty autoracks, including a few that were lettered for Mexican railways. I thought I would share this end of train shot, since it captures the countryside just beyond the train fairly well. As you can see from the way the shadows are reaching across the road, it was difficult for me to tell when I arrived at the crossing which side would be best. I think I could have done better on the other side. Oh well.

It was still fun to catch a train in the countryside and it wasn't the only time in my week in Southwestern Ontario when I caught a train.

Thanks. The references I found online say otherwise, but I trust you're right. As a layman, I really wouldn't know how to spot the difference. The units today are so much harder to tell apart than they were when I was younger.

The flared rads on the rear of the engine are the giveaway.