A little planning pays off

I’ve often read various blogs and articles about planning your shots when trackside. The other day, I had my plans for a railfanning day crushed, which forced me to make do with a brief trip trackside here in Ottawa. That meant shooting another Via Rail corridor consist. This, needless to say, wasn’t nearly as exciting to me.

My first thought was to do a tour of the Smiths Falls Subdivision near my home. I often check a few spots on this stretch of track, looking for something new to capture. Since westbound Train 47 was due to leave Fallowfield Station in Barrhaven in 12:51 p.m., I began there.

Interestingly, there was a pick-up truck hi-railing along the tracks at around 12:30 p.m., although it was nothing worth shooting, so I headed southwest along the line to check out a few other places.

My next stop was the Kott Lumber spur near Moodie Drive. The spur was empty, not that I would have been able to shoot anything around that track, since it is completely inaccessible and shielded from view from most angles. There is a spot along the edge of the Kott property where I considered trying to get a shot of the train crossing the bridge over the Jock River. But the vantage point I wanted was also inaccessible, since it was very likely on private property.

I moved on to the Twin Elm area, to check out the SynAgri spur, which often boasts some interesting covered hoppers, which I have blogged about a few times. When I arrived there, the spur was empty and some bird watchers had taken the spot I was going to use to shoot the Via Rail train. The bird watchers were observing a nest of hawks that have chosen one of the high points of the SynAgri facility to rear their young this spring. 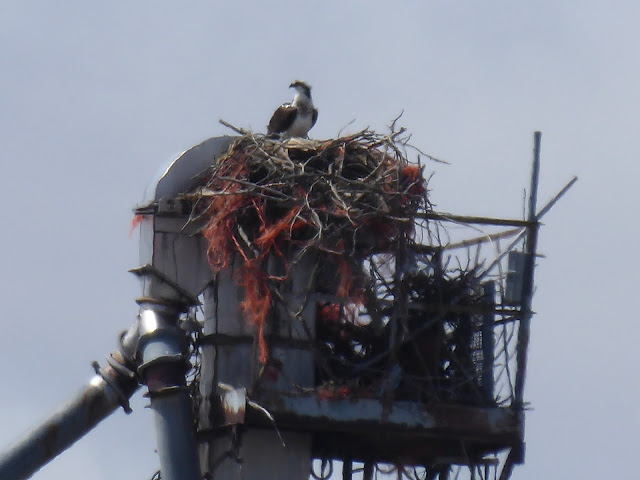 A very long shot taken of a hawk's nest at Twin Elm.


My final spot was the Ottawa Street crossing in Richmond, which I sometimes visit, since there is often interesting maintenance of way equipment on the spurs there. However, aside from the standard snow spreader, there was nothing happening there either.

I decided to head back to the Twin Elm area and try to set up on Cambrian Road, which is not easy, given this road has narrow gravel shoulders. I set up along at a suitable spot, making sure to pull my car off the road far enough so as not to cause any safety issues. When I found my spot, I was glad I had taken the time to think of choosing a good spot. I had the sun mostly behind me, although it was midday, so it was more overhead, but I was definitely not on the shadow side of the train. I was far enough back that my vantage point would allow some wide views of the train when it arrived.

When it did come through Twin Elm, I was pretty happy with the consist. An F40PH-2 led the way, followed by a Via 40 wrapped LRC coach, two more LRC coaches, another wrap, a refurbished Budd streamliner and a P42 on the opposite end. That’s about as much variety as one might expect from a passenger train these days. 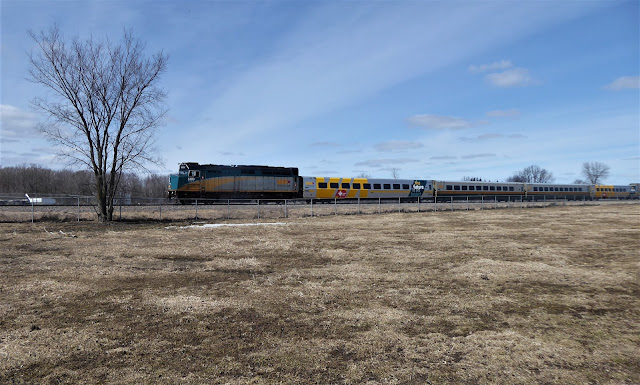 I wish I could say I framed this tree deliberately, but it was just a result of me following the train and letting the shutter fly

It made up for the fact that, in my travels the previous weekend on the 401, I missed out on some pretty impressive trains in Kingston along the Kingston Sub, including a long CN freight and a Via Rail F40PH-2 40th anniversary wrap.


As the train raced through Twin Elm, I kept following it  and letting the shutter fly. As I did, I captured this image of the entire train. I think this might be one of my favourite shots I have captured in a long time. There are many elements in this shot that I like, not the least of which is the sky. 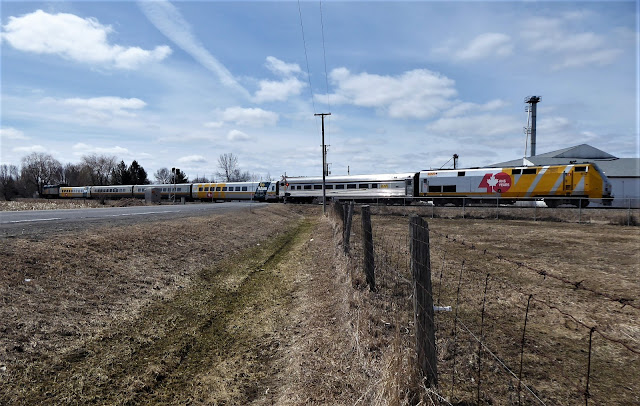 I should mention that I deliberately got close to the fence in the shot so that I didn't have two fences to contend with when the train first came into view. As I followed it, the wire fence crept into the shot, but I like what it adds to this image.


Here's another shot I liked, as I tried to capture the train next to this barn. Sometimes, I like to take shots trackside where the train is just a small part of an overall landscape shot. This is one of those types of shots. 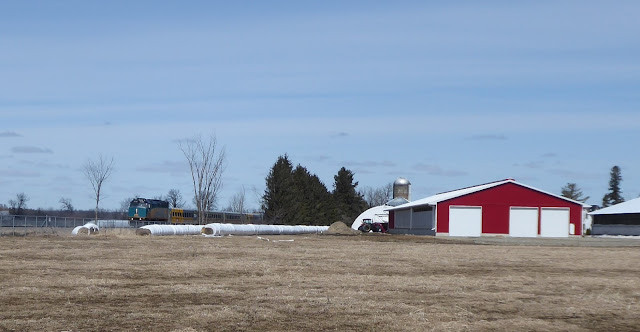 I will be taking a rain check on that railfanning excursion to somewhere in Eastern Ontario in the coming weeks, but this was a nice a consolation prize for the time being.

Nice shots. The Twin Elm area is probably my favourite place int he city. 5 mins from home and good sightlines.

Ever try O'Neil Road off Dywer Hill? It's on my to-do list right now. Checked it out on Streetview a few times and it looks like it could be ideal (good sightlines, quiet, lots of pull over space, a double tracked section and a light tree).

I like that going away shot with the fence line very much. The fence makes the shot. (the glint helps too!)

Thanks gents> I only had a brief window of opportunity, but I was happy to make the most of it. As much as I get bored shooting Via trains in Ottawa, it at least forces me to be creative with my shots.

Michael, do you have a date for that twin-P42 train with VIA 912 on the tail-end? I have April 14 as a first sighting for this VIA40 wrap so far.

Hi Eric. The date of the meet was April 9th. I had the day off work and made the most of it!

Thanks for the date, Michael!
Eric