These last few weeks have been hectic, to say the very least, especially concerning my job, my health and my family. I just returned from a family vacation to Florida and am now in the midst of a job transition, which has required a great deal of studying for the required government language tests. On top of all that, I have just recently gotten over one of the nastiest colds that I have encountered in years.

All that to say, I have not been able to put the time and effort into several upcoming posts for this blog. And it's a shame because I have some interesting material to cover. Without getting into too much detail, I was able to take advantage of a little known behind-the-scenes tour of the Walt Disney World Railroad while on vacation with family.

If you are like me, you are not much of a Disney fan. I didn't really grow up with Disney movies and cartoons (I was more of a Looney Toons fan) and I am not much a theme park fan. However, marrying someone who grew up with Disney and having two young daughters has forced me to take a closer look at all things Disney. 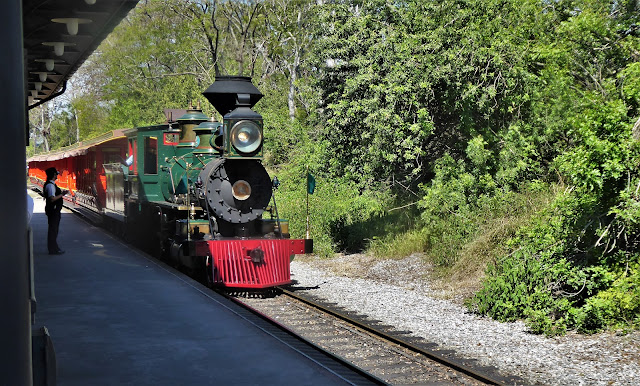 The tour of the company's theme park railroad was much more interesting than I ever thought it would be. I was quite amazed at all the things I learned about Walt Disney and his absolute love of trains. The company founder's love of trains really has influenced much of the company's little narrow gauge railway, which is an amazing little operation.

In the coming weeks, I will share some of the little known facts and behind the scenes looks from my time watching this railway.

Thanks for the update, Michael. Walt surely knew the link between child-like wonder, fun, and railways! Looking forward to the posts when you are able.

In the meantime, I'll start a comment thread based on 'Who is your favourite Disney princess?' Hands down, it has to be Snow White - the original animated version from 1937. A classic!

Belle is my favourite Disney Princess.

I'm not a Disney guy at all - and the idea of going to a theme park fills me with chills.

Wow, talk about a left turn in the comments section! My daughters love Rapunzel. That movie was actually pretty funny. My wife loves this thread, incidentally.

Looking forward to more info about that tour. We're hoping to do it on our next visit to WDW.

I would highly recommend it. It's a fascinating little operation. The only catch is, you have to wake up early to take the tour, before the park even opens!

You had me at "government language tests" - puke.

Glad to see your back, but hopefully not at the expense of other areas of life.
I am definitely looking forward to seeing more about Disney's trains. Never been to any Disney park so it's going to be a fun read!

Oh yeah, the language tests are a real treat. I could start a blog on my experiences in government, but that would be a real downer of a blog.