The little railway that could: Waterloo Central Railway

In last week’s post, I mentioned that my time in Kitchener was a bit of a missed opportunity since I didn’t take advantage of the opportunity to shoot the busy GEXR operations in the city. On my recent trip to Kitchener-Waterloo, I made up for that by taking some shots of GEXR operations near the Kitchener Via Rail station.

But there is another rail operation in KW that I similarly neglected to chronicle when I lived in the area. So, on a recent visit to the area last November, I made sure to search out the Waterloo Central Railway facilities in St. Jacobs and photograph what I could.

Even though the tourist line’s motive power, including ex-Essex Terminal Railway 0-6-0 steam locomotive, WCR GE 70-tonner 1556, former National Research Council MLW S3 switcher (originally CP 6593) and the other motive power were tucked away in the railway’s shed, I had a great view of the railway’s colourful rolling stock, which was easily accessible from adjacent streets and publicly accessible areas. 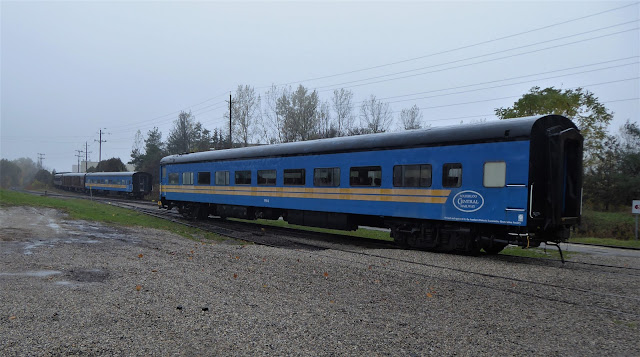 This old Via Rail heavyweight was closest to the WCR maintenance facility. A string of other passenger cars, of different vintages, was just down the line.

For those who may not be familiar with this railway, it has an interesting history goes back to Canada’s unofficial Railway Town, St. Thomas. That was where the Southern Ontario Locomotive Restoration Society originated. This group now operates the WCR and carries out its restoration work in St. Jacobs.

But the tourist railway’s origins go back to 1997, when the Waterloo-St. Jacobs Railway began operating between Waterloo’s old train station on Father David Bauer Drive and the village of St. Jacobs, with a stop at the St. Jacobs Farmers Market (between the city and village). That operation, which purchased CN’s Waterloo Spur, folded in 2000. Soon after it stopped running trains, the Region of Waterloo bought the trackage, which cleared the way for WCR years later.

After a short stint operating a tourist train in 2003, there was no tourist line on the old spur until 2007 when the SOLRS established the WCR and transferred all its rolling stock and motive power to Waterloo. The tourist line has been operating on the spur ever since, with the Goderich Exeter Railway providing freight service at night all the way to Elmira, where the spur ends.

The WCR now bases its trains out of the St. Jacobs Farmers Market area, just north of Waterloo and operates regularly from spring to fall. The railway takes tourists from the Farmers Market into the old village of St. Jacobs and even operates specials as far north as Elmira for that town’s Maple Syrup Festival. In December, WCR also operates Christmas specials for families. 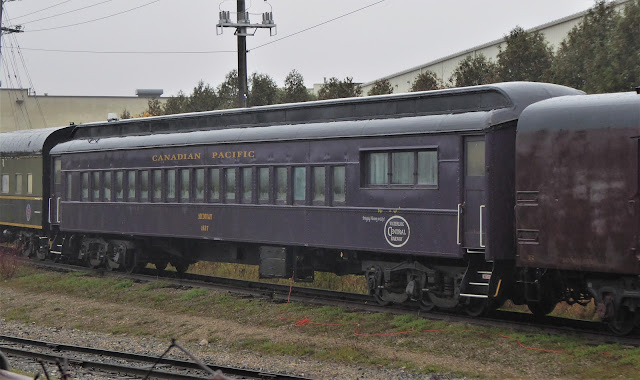 Sadly, when I visited the region, the railway had just finished its fall operations and was weeks away from beginning its Christmas operations. Oh well.

Another interesting facet of this railway’s operations include railway training school for those looking to earn their engineer, conductor or safety crew certifications.

All was quiet when I visited the railway’s yard in St. Jacobs, but what a collection it was. I was thrilled to get some shots of old Via Rail heavyweights, still in their iconic blue and yellow. WCR also has various older passenger cars still in their classic Canadian Pacific and Canadian National colours. These cars are in various states of restoration.

Closer to the main shed, the railway has three cabooses. The two yellow cabooses are WCRX 1040 and 1042, formerly of the Essex Terminal Railway. 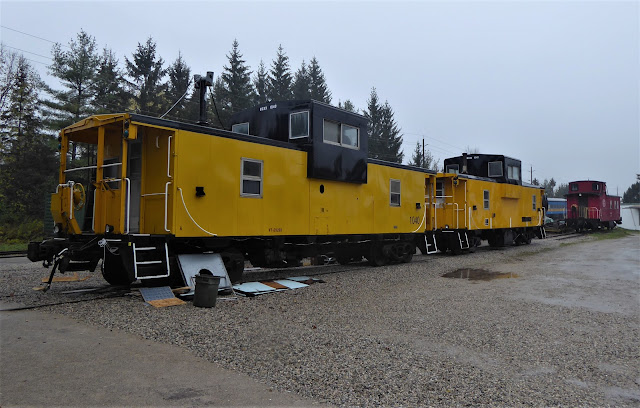 Further down the line, the old wooden caboose sat by itself. This car was a former Toronto, Hamilton & Buffalo caboose, built in 1914. I couldn't get too close to this caboose since I didn't want to intrude on private property. This shot gives you an idea of how bad the weather was when I came to shoot these old relics. 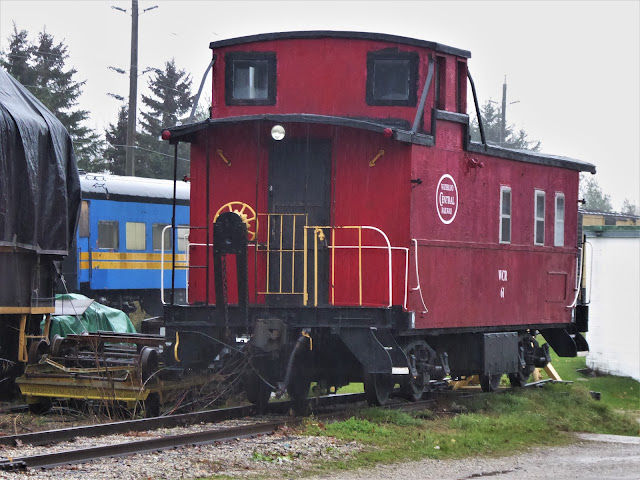 Just north of this main collection of cars, there were a few gems, which are accessible from the end of a residential street and a pedestrian crossing over the tracks. I wasn’t sure if this trail was public, so I stayed on the street and to the side of the tracks, as I was not keen to trespass, especially in an area where I was unsure of the property lines.

This boxcar was the highlight, a former TH&B boxcar with a Canadian centennial logo to the right of the door. 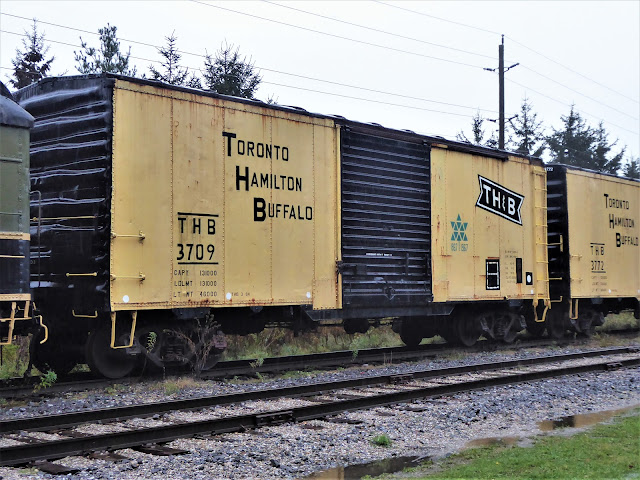 I also thought this was a cool find. The railway appears to be in the process of rehabilitating this old Canadian National heavyweight baggage car. I love the old CN passenger colours before the railway adopted the black and white scheme with the wet noodle logo. 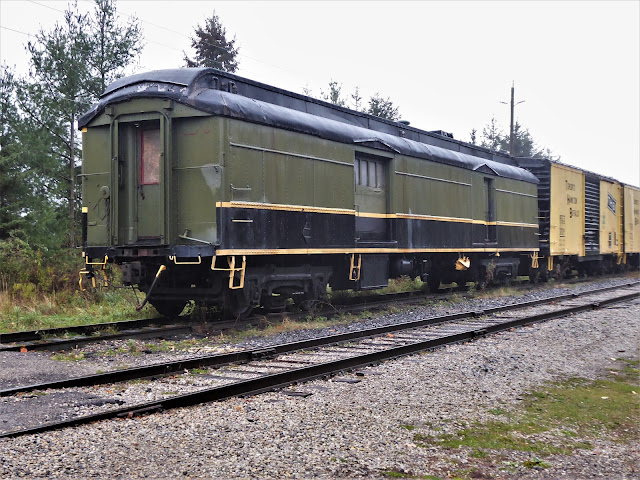 But, the expedition proved to be a real treat for me, even if I wasn’t able to see this fascinating railway in action. The next time I am in Kitchener-Waterloo, I will be sure to try and ride the WCR. I would suggest anyone who has an appreciation for railway history to check out this gem when they get a chance.

It’s well worth the trek up to St. Jacobs.

I'm glad you got to see them. I saw a train of theirs parked in Waterloo a few years ago with the 70 tonner, a few passenger cars and a caboose. Nice looking equipment.

I recall a number of stories about WCR in our newspaper when I was working as a report in KW. This group is the real deal. They have rolled with the punches and have maintained a vibrant tourist operation in north Waterloo and St. Jacobs.

Interesting write up. I hear about these guys quite a bit but haven't been down in that area in at least 20 years, so I have had a chance to check them out yet. I am impressed with what they've been able to do by working hard to carve out a nice little niche.
Really makes me wish that a similar setup could have been developed locally before trackage was ripped up in the valley. I won't speak for anyone else here, but I know there would be a huge market in fall colour tours into the Valley (and dare I say Algonquin Park)!

During a visit to St. Jacobs back in the mid 80's I saw the Waterloo Central, or perhaps it's earlier incarnation. At that time I saw different motive power, namely an F7's (painted green?) slowly pulling the passenger cars towards the station. It's a long time ago however the memory is quite vivid.