Just how long was it?

When I was young, one of the great joys I had was to count the cars on a passing freight train, whether it was a mixed freight on the CSX line through Corunna or on a CN freight train in Sarnia or even a CP freight close to my grandparents' house in Windsor.

Today, I notice many railfans, particularly those who are fascinated by the technical aspects of railways, will report the approximate length of the train or an axle count. I am not interested in counting cars anymore or counting axles for that matter, but I came across a freight train recently that made me consider just how long freight trains are these days.

Before I get into the story, I will point out the obvious. Freight trains have grown longer over the last few decades, with the advancement of distributed power, the use of AC traction and the general progress of motive power compared to the geeps and GE units of yesterday. I remember when I was a kid and saw a train of 100+ cars. I was always impressed with a train that long, but that length is not even noteworthy today on a busy main line.

With that in mind, here is my story of a meet with a long freight train on the CN Strathroy Subdivision from this October. I was heading west toward Sarnia for a visit with family for the Thanksgiving weekend when I decided to take a break in Wyoming, after a long day on the road. Up until Wyoming, I hadn't seen anything on the Strathroy Sub from the Confederation Line, which parallels the sub between Strathroy and Sarnia.

When I arrived at the Broadway level crossing, I noticed the tail end of a freight train near the Wyoming train station. But, the train wasn't moving. It was stopped. I headed back to the Confederation Line and continued west, to see if I could find the head end. And I did find it. A full concession west of Wyoming.

Past Kerrigan Road is Camlachie Road, a north south county road that terminates in the lakeside village of Camlachie, just north of Sarnia's city limits. It was at Camlachie Road that I found the head end of this train.

I was intrigued as to why this train was stopped here. The sub is single track until it gets closer to Mandaumin Road, where the main line splits into double track until it connects with CN's Sarnia Yard.

I made sure to get as close as I could and take note of the power up front. I was quite glad that I took my time because the power on this train was pretty cool. 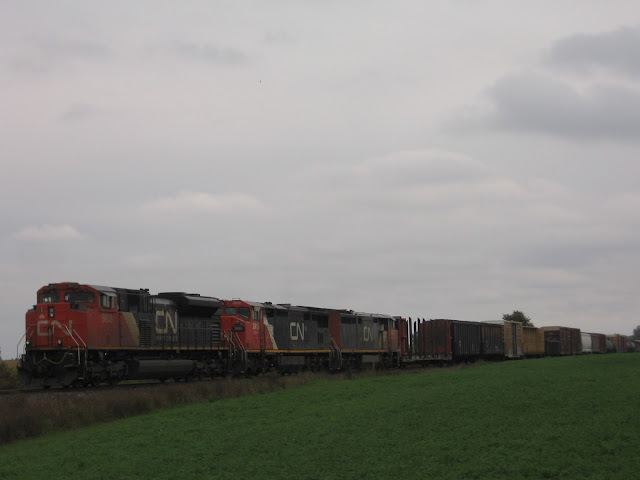 Here's a shot from the other side, with SD70M-2 8803 in the lead. I find these engines pretty ugly. The front end looks like some hideous compromise between the typical angled wide nose engines of today and the boxier feel of the old geeps. But the lead unit was not really what caught my eye. Do you see which locomotives are second and third in line on this train? 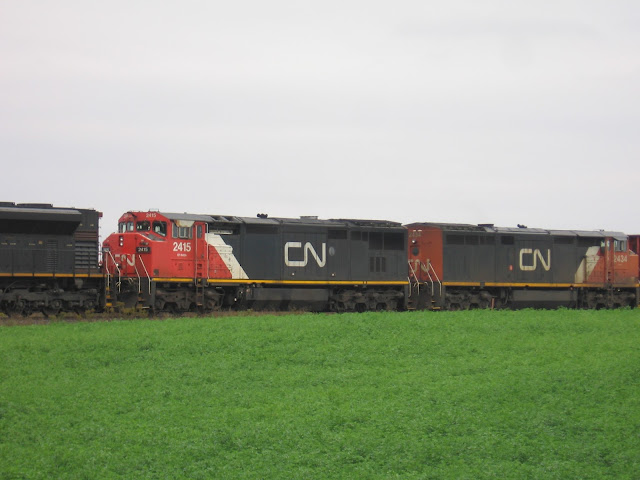 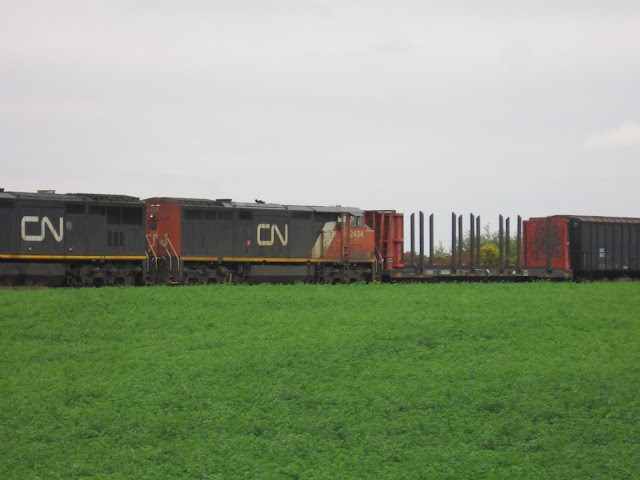 CN 2434. Another  Dash-8 cowl unit. My brother says these units are pretty common on this subdivision, based on his sightings, but for me, it's always a coup to see one. You can also make out the flat car and the carbon black hoppers trailing the power. The last time I saw a cowl unit, it was a safety scheme cowl unit on a westbound mixed freight heading for the tunnel beneath the St. Clair River. You can see that post here.

I stuck around for a while to see if the train got going again, but it was definitely idling for some reason, most likely a bottleneck near Sarnia Yard. Either way, it's always a nice break when you can get a shot of a freight train and not have to rush around.

But the question in my mind remained: how long was this train? It extended from Camlachie Road all the way to the Wyoming Via Rail station.

Well, here's how I arrived at a solution. My first step was to plot a route on Google Maps from a place on the corner of Broadway Street in Wyoming and the intersection of the Confederation Line and Camlachie Road. I did this because I needed a measurement from a road close to the Via station (which has no fixed address and is located off a side street) all the way to Camlachie Road. Since I choose a point on Google Maps that went from intersection to intersection, I found out that the distance was 3.8 kilometres. A long train, right? But we're not done yet.

Since the train was basically extended to the Via station, which is not on Broadway, I had to find out the distance between Broadway and London Street, which is close to where the station sits. Technically speaking, the Via station has no address on Google, which made this calculation a little more difficult. Google Maps told me that the distance between Broadway and London streets is 200 metres. So, that means the train was about 3.6 km long, right? Well, not quite. As you might tell from the photos, the train is stopped roughly 30-40 metres from the crossing, so it was probably closer to 3.5 km long. For those who prefer miles, that means this train was about 2.17 miles long, not factoring in slack, which would certainly add some distance if the train was fully extended. So, all in all, it was a pretty typical length for a main line freight train.

Whatever the true length was, I thought it was a fun challenge to try and get a measurement on this train, particularly without the help of mileposts. For someone who loathed math in school, I'm happy I paid attention.
Posted by Michael at Thursday, November 23, 2017
Email ThisBlogThis!Share to TwitterShare to FacebookShare to Pinterest
Labels: CN, cowl unit, freight trains, railfanning, Southwestern Ontario, Strathroy Subdivision, Wyoming Ontario

I find the ruler tool in Google Earth handy for these exercises as you can also trace curved lines with the path option.

In Google Maps you can right click on a spot and select Measure Distance and start drawing lines from there. It'll give you the total. I've used it to figure out how far I've walked to some places.

Thanks for the tip. I was looking for that feature in Google and gave up, hence the old school method.