On November 27th, I made my way south of Ottawa toward the tiny village of Finch, Ontario to catch the Canadian Pacific's annual Holiday Train. This was the first time I have ever seen this train in person and the experience was great. I have to credit the railway for putting together this train for the 18th consecutive year. I have been very critical of CP recently, but full credit to the company for this effort, which always draws huge crowds and helps local food banks in the process.

The drive down from Ottawa was about an hour, so I made sure to arrive about 15 minutes early with a plan in place to shoot the train. I knew from looking at video from past years that the Finch stop draws a massive crowd, so I decided to find another spot in the village to shoot the train from a safe, legal standpoint. The shot you see below is where I initially wanted to set up, but a number of railfans beat me to the spot. 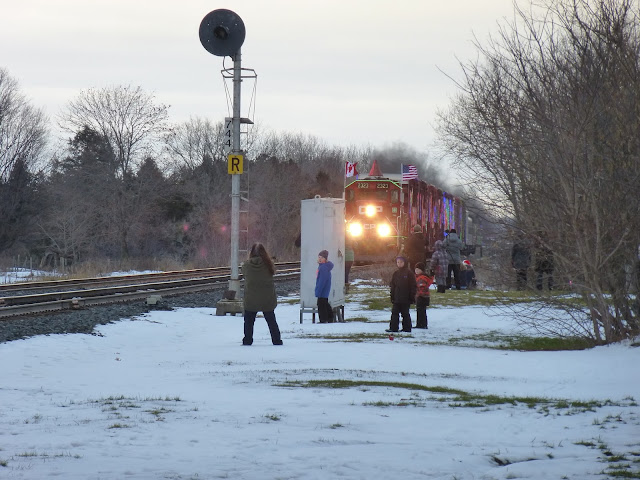 My Plan B was essentially just a minor relocation. Bergin Street in Finch runs parallel to the tracks so I set up there, but not before parking my car down Main Street. The OPP had just about the entire network of side streets blocked off, including Bergin, although a number of area farmers opened up their fields for parking. Anyway, the lesson here, as always, is to have a back-up plan. I was glad I did not choose this location where these railfans were.

I have come to the realization this year that a good railway shot should also put your image in some sort of context. The shots these railfans got from this vantage point are fine, but the backdrop of trees doesn't really tell you that the train is approaching a town. It doesn't really give you an idea of where the train was. 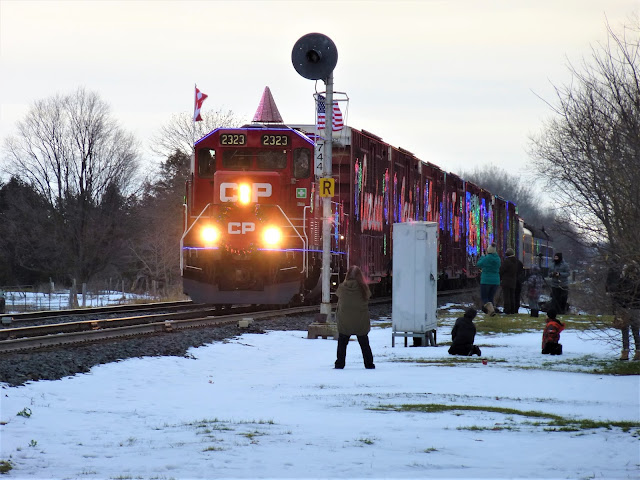 With this shot, you begin to see why I chose my spot down the street. For one, my spot allowed me to capture the farm across the tracks from Bergin Street. Here you see CP 2323 (that was the train number and the locomotive number) crossing a large stockpile of hay that has been wrapped up for the winter. This is a common scene in Eastern Ontario, since hay is a common crop, but that was part of the point of setting up where I did. Hay fields, to me, say Eastern Ontario. Again, it's the context that was important to me. 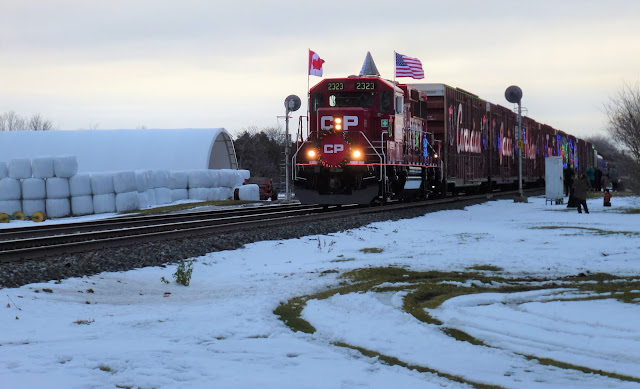 This is the shot I envisioned as soon as I walked down Bergin Street. I wanted to capture the train and the silo. This was my favourite shot of the train from this meet. This is one of those rare times when I plan a shot in my mind and the one I capture turns out exactly the same. You can see the first four CPR boxcars with the 'Canadian Pacific Holiday Train' script trailing behind the GP20ECO. This is also the first time I have caught a rebuilt ECO unit. 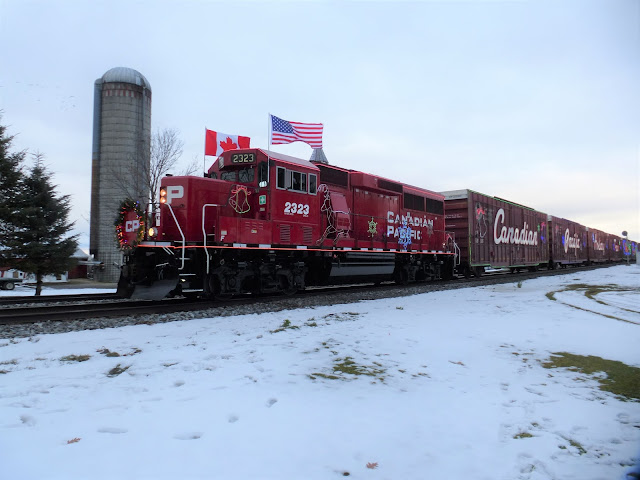 I liked this shot below because the CPR employee is leaning out of the vestibule of CP101 Dominion and preparing for the stop. The old oversized passenger cars were an amazing site to see. I also was happy to capture them in front the silo. The holiday train's consist was essentially eight decorated XP class box cars, one additional boxcar in the middle and four beautiful old CPR business cars. The first boxcar was CPR 220305. Looking at the shots available online of this boxcar, it's obvious that the railway uses the same cars for this special train year after year. 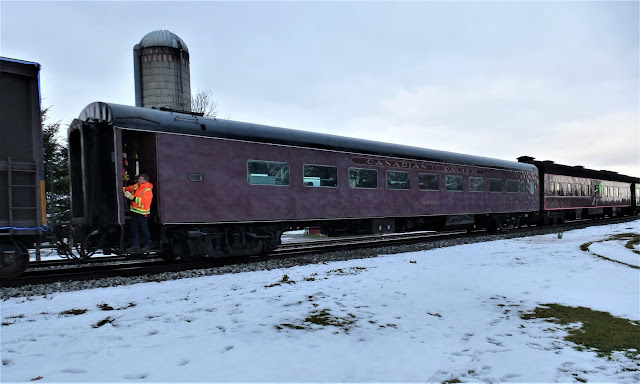 The other business cars in the consist were CP71 Killarney (centre, below), CP77 Van Horne (trailing car, built 1927) and CP84 Banffshire (you can see a small piece of it on the left and in the shot above behind Killarney). 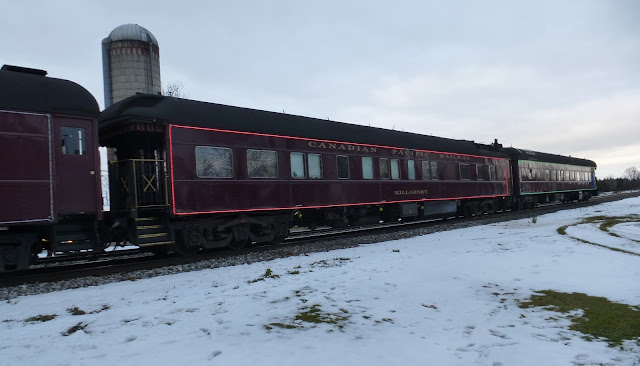 Here's a shot of Van Horne approaching the Main Street crossing in Finch. I like how even the ETD is decked out with a ribbon. The back of the car is decorated quite tastefully, I must say. You can see a tiny bit of the crowd on the right side of the photo. I was astounded by the number of people that came out to see this train. It makes me realize just how much people appreciate the railways. I dare say the population in the village more than doubled when this train stopped. I was very fortunate to find an unobstructed view of the train. 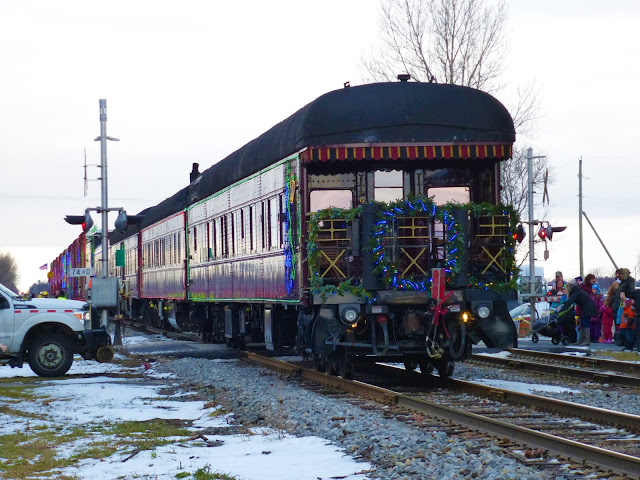 Once the train crossed Main Street and came to a stop, I crossed the tracks on Main and took a few shots from the other side of the tracks. I couldn't help but stare at the old 1920s heavyweights and wonder if my grandfather had ever serviced these cars when he was a rolling stock mechanic in Chapleau, Ontario.

The lighting wasn't great on either side of the train, since it was cloudy and dark in the late afternoon. But, the clouds did eliminate the problems with shadows which was nice. It made the final photo editing process rather painless for once. I chose to shoot the train in Finch because all the other stops in Eastern Ontario (Merickville, Smiths Falls and Perth) were too late. As much as I like the challenge of shooting trains at night, I didn't have the time that day or the patience to wade through the crowds at night. 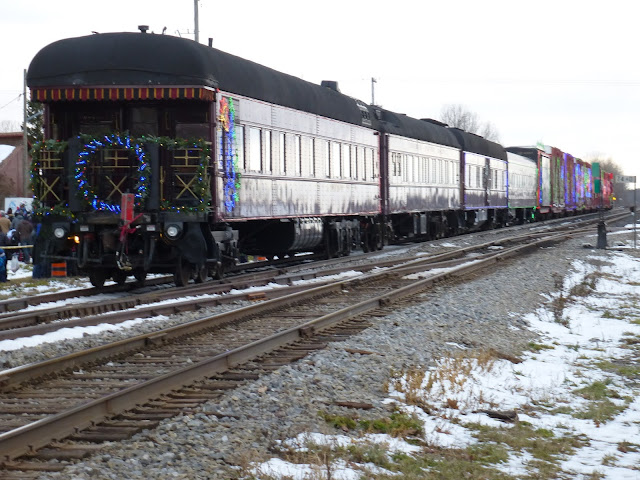 One last shot. I took this because I liked the lines I was seeing through my viewfinder and I liked the idea of getting the sign in the shot. 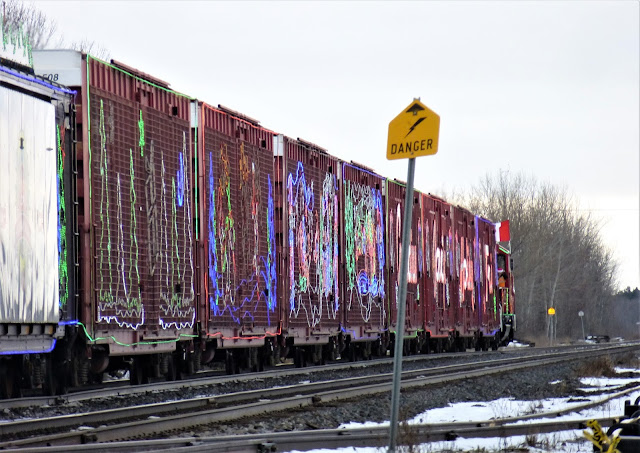 All in all, I was really satisfied that I made the effort to see this train. It was a late birthday gift from my wife. She asked what I wanted and I simply asked for a little bit of time to do this.

A few final thoughts. Anyone thinking or railfanning in Eastern Ontario needs to add Finch to their list of spots. There is a nice stretch of green space next to the Winchester Sub that allows you to catch trains safely and legally. This sub still sees a fair bit of traffic. There are a number of spots in this town that offer great vantage points. Just west of Finch, the county road parallels the sub at many points, which offers a number of other spots where you can shoot some mainline action.

One final observation. I was horrified to see so many people waiting for the train who had absolutely no concept of railway safety or awareness that train tracks are private property. One dad was walking with his son and didn't seem to mind when his son wandered over to the tracks and began walking on them just minutes before the Holiday Train came through town. Also, I didn't take photos of a few of the railfans ( in the top photo) who were far too close to the tracks.

On a day when Finch was overflowing with OPP officers and railway officials, these people were taking an awfully foolish risk of wandering onto the tracks or even near the tracks. I understand that some people aren't as aware of rail safety or railway etiquette as I would be, but it's just common sense. Trains are big, heavy and dangerous. Stay clear, stay safe, as the railways remind us.

Okay, with that public service announcement out of the way, I wanted to take this opportunity to thank everyone for dropping by the blog this year, especially those who commented or emailed me with tips, photos or suggestions. I have had a lot of fun sharing my passion for railways with everyone and I truly appreciate the response I have received on this blog this year. This will be my last post of the year.

Merry Christmas to everyone. All aboard for another year!

Really nice photos of the Holiday Train, Michael! I like the angles you chose and I like that you included the silo. I agree it's important to put the train in context - something that took me a long time to realize.

Merry Christmas and all the best in the new year! Highball!

Finch reminds me of Lansdowne on CN's Kingston Sub. Someplace I need to railfan more often. We could have a debate about day vs. night Holiday Train. Daytime is definitely better to see the equipment, though seeing the lights in Belleville as we did a few years ago really 'makes' the train. Of course it is all for a good cause.

Thanks for being a great blog partner this year, Michael. I have appreciated your viewpoint and your enthusiasm, both which clearly show through in your posts. Great header photo too, by the way.

Merry Christmas to you and your family, and may you enjoy a happy, train-filled 2017!
Eric
(I still have a couple of posts in the can for the remainder of 2016!)

Thanks again, Steve and Eric. I appreciate all the traffic that comes for your blogs alone. You've both taught me a great deal. Eric-- glad you have more material in the can. I have some stuff there as well, but it is not close enough to publish and I'm frankly too busy to wrestle with it right now. I am thinking about taking the blog in some new directions next year and am using this time to think about some of the new ground I want to cover. Stay tuned.

Oh, and all the best to you and your families over the holidays.

Thanks for another year of a fun blog related to trains in the area Micheal.
I can't wait to see what you have in store for us in 2017!

Have a great Christmas and New Years

Much appreciated, AJ. All the best to you over the Christmas Break.