Fall is here and it's time to get out there to catch some railroad action amid the autumn colours. It's one of the great opportunities for railfans in Canada. With that in mind, I had some time recently to check out some of my usual spots, just to see what was happening along the local tracks.

This first shot shows a string of five hopper cars at the SynAgri feed mill in Twin Elm. Those red hoppers are Potash Corp. hoppers, just like the ones I caught last year in late fall. I thought about trying to catch a train going by the mill, since I was already there and I knew a train from Toronto was due. Unfortunately, the neighbouring farmer hadn't yet harvested the corn, so the visibility to the tracks was limited at best. I grabbed this shot but made a mental note to come back. Capturing a train going by this mill would make a great shot, especially with a string of hoppers parked on the spur. 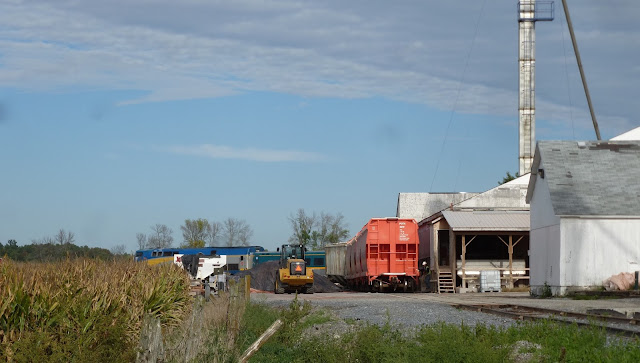 I returned the next day to get a shot of the mill from Cambrian Road (the above shot was taken from Twin Elm Road). Here we see a Potash hopper and a AEX patched hopper. I think these hoppers are empty and waiting weekend pickup since it appears in the top shot that they were busy unloading the cargo and tarping off large piles next to the tracks.

In the shot below, you can see the first traces of the leaves changing colours. And get a load of the licence plate on the fence. I thought I'd keep that in the shot for some variety. 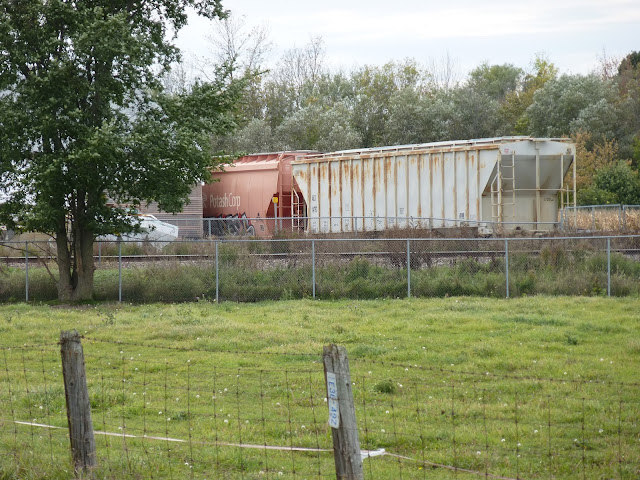 Speaking of hints of fall, I took this shot at Fallowfield Station recently and caught this fairly typical corridor consist headed west toward Toronto. I was happy with the clouds and the colour of the field next to the station. Again, fall! I'm hoping to catch some fall colours in the railway shots in the coming weeks. Looking through my railway shots, I noticed that my fall collection is a little thin. 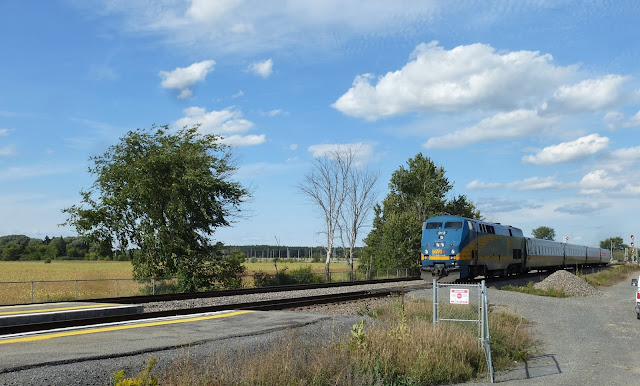 As I cruised along the Smiths Falls Sub, I noticed that most of the MoW equipment on the spur in Richmond is gone, which suggests to me that most of the track work in the city has been finished for the summer season, although you will notice that there's a large pile of ballast next to the Via train in the above shot, so maybe there are a few tasks left to finish.

Recently, the city decided to fence off the Prince of Wales Bridge, which is both a good thing and a bad thing. It's a bad thing since it means there are no immediate plans for the city to use this bridge for commuter rail, which seems like a natural move. However, coupled with this move to fence off the bridge, we have finally heard from city councillors regarding what should be done with this bridge. Happily, we have finally heard from them that the city's long-term plan for the bridge is to indeed use it for light rail, which is the first time we have heard this from the city in a long time. Baby steps...

Many people were disappointed by the move to essentially do nothing with the bridge, since many were pushing for this bridge to be converted to a recreational path. The city says it doesn't have the budget for this. Those who have been using this bridge as an informal recreational path have balked at this and have cut through the fences that now bar people from crossing the river on the old CPR right-of-way. Others staged an informal picnic on the bridge as a way to protest the city's inaction.

City police and bylaw officer intervened and put an end to the impromptu picnic. It should be noted that, although this bridge has been used as a pedestrian crossing for years, it's private property and should not be used. Besides, it has not been maintained properly for years, so there's always the safety issue as well. If that's not enough to dissuade you, the city has warned would-be trespassers that they have dispatched more police and bylaw officers to the area to catch people on the bridge. 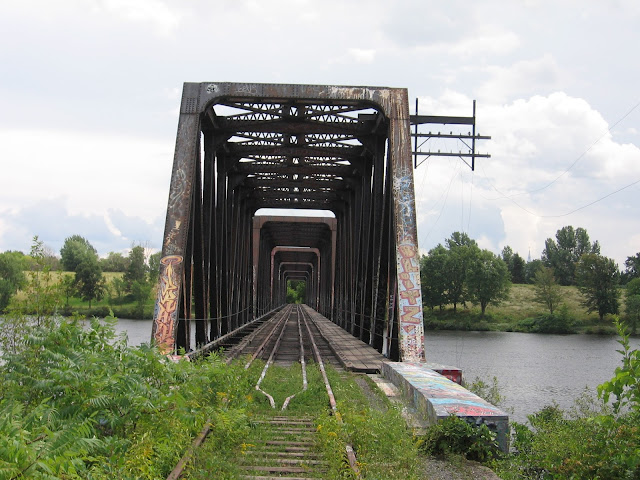 One final note. The Municipality of La Pêche in Quebec says it has worked out a deal to bring the Hull-Chelsea-Wakefield Steam Train to town, to use as a static display at the old CPR turntable in Wakefield. Those in the Ottawa area may recall that this steam train was a poplar fixture on the old Canadian Pacific Maniwaki Sub on the Quebec side of the river. The train stopped operating in 2012 when heavy rains washed out part of the track. The owners of the tracks, the municipalities along the line including the City of Gatineau, have not been able to commit the funds to repair the extensive damage to the line.

A number of offers have surfaced over the years to resume operations on the line, but nothing has solidified. So it appears that the rail line will more than likely not see any more trains. Creating a display in Wakefield isn't a bad idea, since there have been suggestions that the rolling stock and engine used on this line could be scrapped if nothing is done to resume operations. Curiously, the steam train operated with Swedish equipment, so any display in Wakefield will not celebrate the trains that actually operated on the Maniwaki Sub, but will remember the equipment that was purchased to operate the steam train.

There have been a few mentions in the local coverage that there are still efforts to find an operator for a seasonal tourist rail operation. We can only hope, since it would be a shame to see this amazingly scenic line scrapped.

It's weird to put that train on display... as you say, it's Swedish equipment so it's not historic at all for Canada. I wonder if the steam engine is operable at all.

Good news that the city actually has some plans for the bridge!

As a fellow reader pointed out, the bridge is in the city's official plan as a commuter link. I am hopeful that what is on paper can be matched by the actions of the city council, even if it's not right away.

Great autumn update, Michael. Twin Elm is a location I have to visit at some point!
Eric

Ottawa doesn't have a lot to offer for the railfan, but Twin Elm is a hidden gem. Thanks for your comment, Eric.