There's a good explanation for this shot.

Yes, the shot below is the ever elusive CN 589 heading back to Walkley Yard on a recent Wednesday. I have found some time over the summer when I have  finished work early and camped out at a spot along Northside Road in the hopes of catching the Arnprior Local. Well, I managed to catch it last week, although just barely. There's a decent story behind this shot. 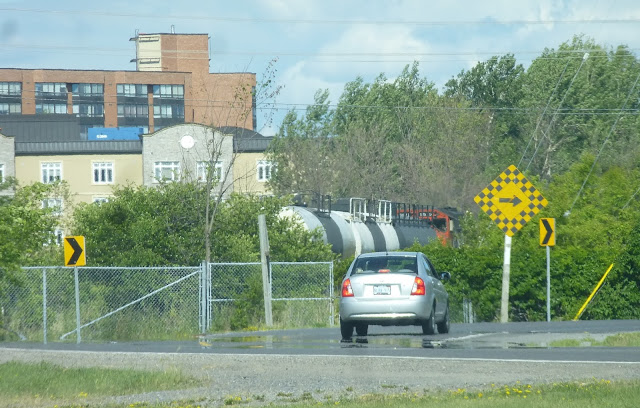 I sometimes head out to take some quick shots of late afternoon Via Rail corridor trains in Barrhaven. I have been experimenting with vantage points along this walking trail beside the tracks. You can access it from Cedarview Road, right at the point where it abuts at the Smiths Falls Sub. Given the greenery that has been growing on the safety fence, the sightlines are limited. This image below is one of the better shots, although for the most part, the images didn't quite work out the way I envisioned. That's part of experimenting with different locations. 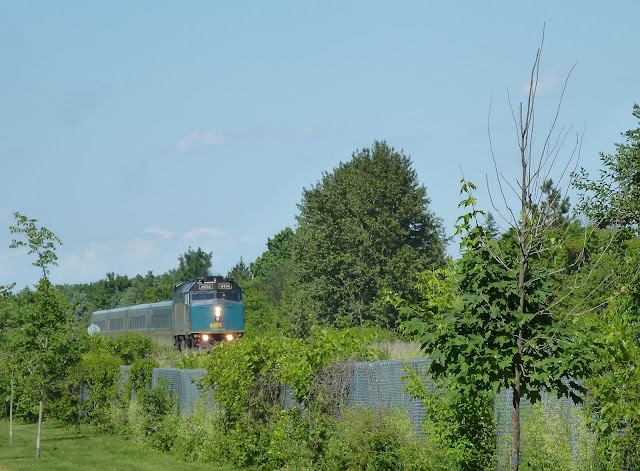 Anyway, after I caught Via Train 55 westbound, I checked my watch and noticed that the timing could possibly be right for me to camp out alongside the Beachburg Subdivision to see if I could catch the Arnprior Local. Its timing has been inconsistent since I've taken an interest in it, but there are a few times that seem to produce better results.

I began making my way back to Northside Road, just in case 589 showed. The mistake I made was making one tiny pit stop on my way to Northside, which cost me a few minutes. It turns out that those minutes were crucial, since the local was already moving along Northside Road when I arrived. And, as is Murphy's Law, I was stuck behind a law abiding citizen who was driving below the speed limit, which hampered my ability to pull up to a spot and quickly grab a few shots.

The top photo you see was the best I could do. And, yes, the car in the shot is the law abiding citizen who didn't help my efforts. I still like the shot, though, since it captures the train in the midst of a busy urban environment. You wouldn't know it by looking at the photo, but the train is actually crossing the bridge that carries the Beachburg Sub over Highway 416.

What's the lesson? Well, I guess you could say don't dawdle when you are pursing a train and stay focused on the task at hand (but do it safely, of course). Truthfully, there is no lesson. I could have just as easily showed up trackside only to be skunked once again. Such is the life of a railfan in Ottawa.

I am grateful that railfans continue to report their 589 sightings to this blog. A reader mentioned to me that he saw the Arnprior Local making its way west to Arnprior on July 4th, which was a Monday. This certainly adds another layer of complexity to our collective efforts to shoot this train each Wednesday when the train doesn't even make its rounds on Wednesday!

Oh well. As always, I'm hoping my lack of success at least makes for interesting reading.
Posted by Michael at Thursday, July 07, 2016

Congrats on catching it, even if it was mere seconds. The shot sort of surprised me as I didn't recognize it's location by looking at the background (Looks like warehouses or a factory), but it makes a lot of sense when I look at it. I am more used to catching it on the other side of the 416 from that vantage point!

I also wanted to bring the Moose Consortium some attention as they've recently applied to the Feds for authorization to run passenger service on 400km of track in the NCR. According to their maps, what I found was notable was how they have full interest in using Beachburg and the PoW Bridge! Perhaps this was a driving factor in CN/The city doing some track maintenance this year on the sub. Either way it certainly is good news and worth keeping an eye on!

I have missed trains by seconds so many times... I'm glad you were able to at least catch a glimpse of it.

"Going with your gut" is often helpful. There have been times where I had a feeling a train would be by shortly, and indeed it was. When you railfan an area many times, you get a feeling for the ebb and flow of trains and that can help you... as it did here for you.

On a side note< I work in the Hawthorne area next to the tracks leading east to the Alexandria sub. This Friday July 8 at 9 40 in the morning I happened to catch a 34 car train leaving Walkley yard. Full of Wisconsin Central hoppers and flat cars full of steel coil. I have noticed similar trains departing around 8am on Saturdays and occasionally I can catch them re-entering Walkley yard in the early evenings. May be worth a look in the east end, they seem to be the largest trains left in the Ottawa area. Wish you luck

Michael, I enjoy your blog posts every week. Keep up the good work. It's unfortunate that rail fans in Ottawa have so little railfanning to do, but such is the situation here.

While I'd love to see tracks put back on the Beachburg sub, as the Moose Consortium envisions, I think it's safe to say that this is a pretty unlikely possibility. With a lack of investment on the line for several years, it would be an enormous undertaking to put track back where there were only minimal carloads pretty much since CN inherited the Ottawa Central in 2008. It would be a real stretch for any investor to make a case for this when it comes to financing. It's unfortunate they didn't come up with this idea 3 or 4 years ago.

I have also read over the years that the CP M&O sub could one day be re-used for a high speed rail link between Ottawa and Montreal. While it is the shorter route, it probably makes absolutely no sense. I think VIA may retain ownership of the right of way, but that would take some further investigating. I have snowmobiled the entire length of it in Ontario, and a small portion into Quebec. There is a spot near Vankleek Hill I think where a house is pretty much sitting on the right of way, but it's a century type home, so I don't know how it got there.

On a final note, I had a chance to climb up the embankment onto the Beachburg sub near Merivale over the weekend while my girls were at a miniputt birthday party. Interestingly, there are still block signals looking east from this vantage point, but like the signals in Bells Corners, they are turned away from the line, and are dark. I took a few pics, and made my way back to the party. Hopefully this line doesn't disappear too.

Thanks, everyone, for your comments. I agree with Keith about the Moose consortium. I applaud their efforts but I do think it's too little too late. They have been trying to get some sort of commuter rail program together in the region, but I can't see anything happening here, especially on the old Beachburg right-of-way past Nepean Junction.

Robert -- I agree that the biggest trains are in the east end. I think what you are seeing are the trains where CN picks up its carloads from Coteau, Quebec (that's a guess) or drops off its empties. I think the one big train we are likely to see in Ottawa is this train, where we see one consist that includes all the cars that will be delivered to customers through the week, including the coil cars for the steel works, the lumber cars for Kott, the tank cars for Nylene etc.

While out Geocaching on Sandhill Road late this morning / early afternoon I heard the train horn blowing as it went through SMH approaching Terry Fox.
We eventually ended up at Old Carp Road and March Road.
As we crossed the tracks I looked eastward and saw the train approaching.
Did a U turn and parked the vehicle facing the crossing.
After quite a few minutes, the train went lumbering by shortly after 1 PM. Two locomotives and five tankers.
I have to check the dashcam footage to see how the video turned out.