Last week's post was nearly three years in the making. When I first started this blog in 2013, one of my first ideas was to trace the history of Canada Southern's St. Clair branch between St. Thomas and Courtright. Up until late last year, the post was in various stages of disrepair, owing to my utter lack of photographs of this line and my limited knowledge about this ghost of railroading past. Thankfully, in the past few months, several elements came together to get this post online. The end result reminded me of how much work it is to examine history, especially when there is very little to go on. 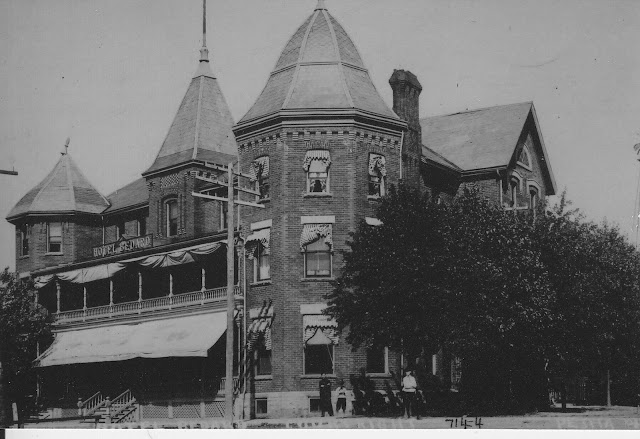 The Hotel Bedard, a railway hotel at the end of the CASO St. Clair branch in Courtright, Ont. The building, which faced the St. Clair River and served boat traffic in its heyday, was torn down in recent years.

Truthfully, this post's genesis happened long before I even started this blog. For years, I had no idea that a rail line terminated in Courtright. But one afternoon, as I was driving down the old Highway 80 (now County Road 80), I saw something in a farmer's field that sparked my quest to learn about this railway line. I was merely glancing out the window what I saw was I thought looked like a small railway bridge in the middle of a farmer's field. The bridge had to be an old railway bridge since nothing else made sense, seeing as the structure was nowhere close to any road or even private drive. That was my first indication that there was history begging to be discovered.

Years later, as I was beginning to wonder what to do with my old railway photos from the early 1990s, I began to actively search for railway blogs online. After a while, I came across one of the most extensive railway history websites about railways in Ontario, CanadaSouthern.com. This site has to be the most definitive source of information and photographs on CASO that you will find online. Searching around that site, I found information about the St. Clair branch, a rail line with deep historical roots in Lambton County. 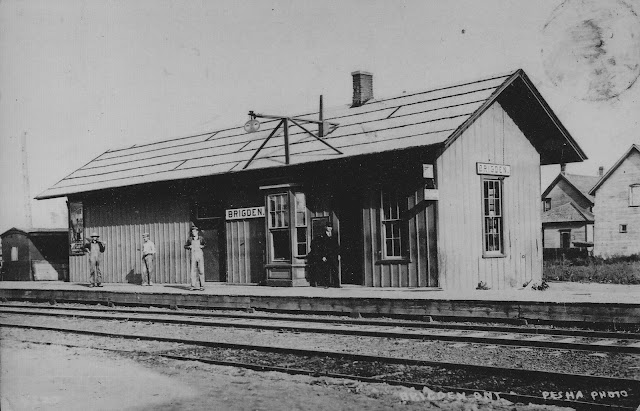 Once I read about that branch, some elements began to come together. I already had purchased this photo (above) of the Brigden train station years before not to mention a shot of the Hotel Bedard in Courtright. I didn't know for sure what railway the Brigden station served. Soon after, I found some other photographs, including a shot of the Oil City station, that began to fill in the picture of what this old operation looked like.

Last year, I found a document that outlined the operations on the branch. In November, my Dad was able to find some historic photos of CASO operations in Petrolia that helped me fill in some more gaps in my knowledge. Finally, my brother was able to determine that the old CASO station in Petrolia was long ago moved to Bright's Grove where it has served as a private residence ever since. My brother was able to get a shot of the old station, which helped fill in another gap.

Finally, I was able to search through some very active Lambton County history groups online where I discovered a few more images that illustrated certain elements of this rail line. Finally, I tracked down a shot of the old Courtright station from the Moore Museum.

All these elements came together late last fall when I began to piece together the history of this long vanished rail line. I had to rewrite sections of it several times, since my understanding of the line changed several times. For example, I didn't know that Oil Springs was on a spur off the St. Clair branch, which dramatically altered the post, since I had originally written it with the understanding that Oil Springs was on the main line. The end result was last week's post, which was years in the making. It was definitely the more labour-intensive post I have put together for the Beachburg Sub. I would have liked to share it back in 2013, but better late than never.

This leads me to a question. I have been asked by a few readers whether I have done any research into old branch lines and subdivisions around the Ottawa area. I have stayed away from doing any historic posts about old subdivisions in this area, simply because there are better sources of information out there than this blog. Several rail history buffs have written books about Ottawa's rail past, which would be the best resource for those interested. However, if people are interested in hearing about old subdivisions in this area on this site, I'd be glad to take a crack at it. For example, I have uncovered an old right-of-way in the Crystal Beach area of the city, which I am researching right now. Feel free to leave a message with your thoughts.

I enjoy your blog and encourage you to go ahead and write about old branchlines in the Ottawa region. Even though there may be other works in the area, you'll no doubt bring your own perspectives to the discussion, and you may have information that will shed light on things others didn't know about or haven't thought of or solve long standing questions.

Thanks for the comment, J D. I am working on some research into a west-end line that ran through Westboro-Crystal Beach. I hope I can find some images and info that will be of interest to everyone.