Once in a while, it all comes together and the fates smile down on me. Recently, I've been exploring the rural areas in Ottawa's southwest end. I usually make it a habit to cruise through the Twin Elm area, since it allows me to cross the Smiths Falls subdivision at Eagleson Road, Barnsdale Road, Twin Elm Road, Cambrian Road and Moodie Drive. I noticed recently that I was crossing Twin Elm right around a time when the traffic control signals on the subdivision changed from a yellow aspect to green. This was a hint to me that quite possibly a train was due. I was right, since Via's Train 42 from Toronto breezes through the area right around 4 p.m. A few weeks ago, I was driving south down Twin Elm Road when I saw the crossing gates lower. The road was empty so I stopped well before the gates and rolled down the window to get a few shots.

A F40 and four LRC cars is the usual consist for this train, as I have come to cross paths with it several times in recent weeks. But on the day when these photos were taken, a number of things seemed to come together. The sky was an interesting mix of clouds and clear patches. The twilight rays of the sun had cast a beautiful glow over the countryside as I framed this shot below of Train 42 rumbling through the countryside. 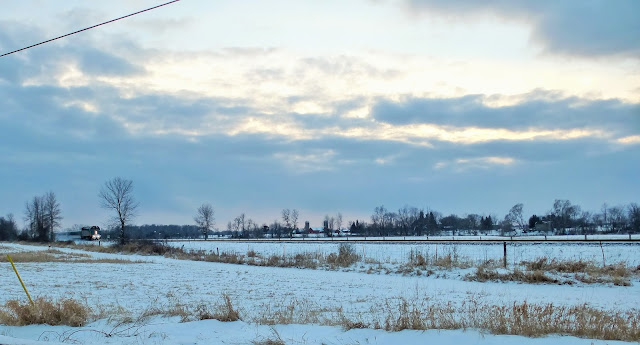 What I like about this shot is that it could be anywhere in Canada. It has a prairie feel (okay, maybe too many trees), but it also reminds me of southwestern Ontario. The mix of snow and golden weeds adds a nice contrast to the landscape. I tried to get my car between the hydro poles so I wouldn't get them in my shot, but I still managed to get a wire in there, which I left in because I didn't want to crop out too much of the sky. I've got a photo editing program, which is rather basic, which does a terrible job when I want to remove wires from my shot. Anyone have any suggestions for a basic editing program that does the job?

The next shot I was particularly proud of, I have to admit. I am not a great photographer by any means and I don't have sophisticated equipment. This means some of my images lack the quality you will find on other blogs. But, as I mentioned at the outset, sometimes it all comes together and I manage to get a shot that makes me look like I know what I'm doing.

In this shot, F40 6404 leads Train 42 to the Twin Elm crossing. I love the sky in this shot as well and the clouds of snow being kicked up by the LRC coaches. I can imagine people aboard that train, staring out at the windswept landscape, being thankful that they are warm inside the train and almost at their destination. They might be looking at me wondering, what is that guy doing taking photos of this train? 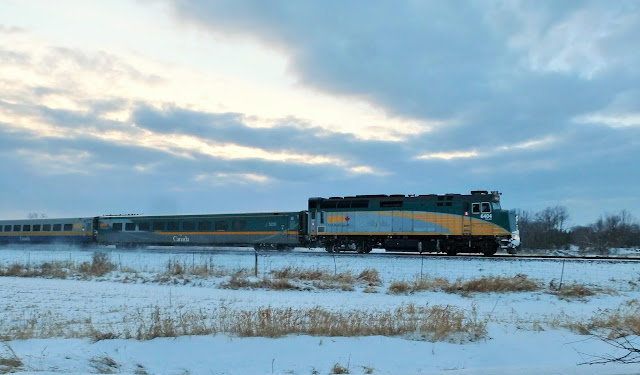 A small bit of news regarding Ottawa's Central Station. The National Capital Commission, the federal agency that is charged with various planning and design functions in the capital region, has approved the design concepts for the renovation of the station. These renovations have been planned for some time. They include raising the outdoor platforms (see current platform below, from this January 2013 shot) to a height equal to the bottom of the doors of the coaches. This would make the Ottawa platforms similar to the ones at Montreal's Central Station and Quebec City's station. 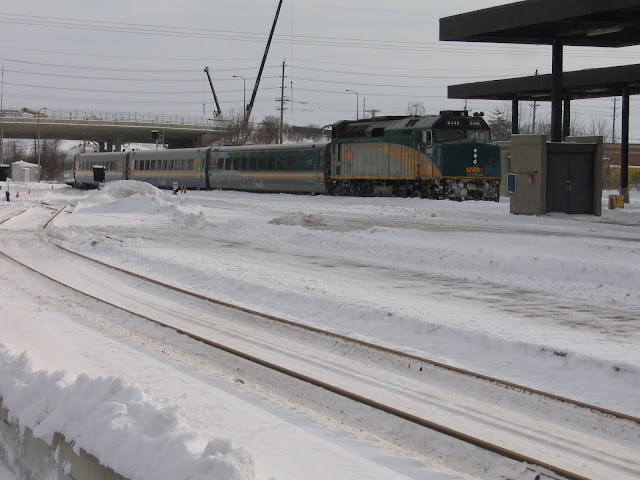 I use Lightroom, which can do the healing brush you would need to get rid of the wire. For basic photo editing you may want to use the unfortunately-named Gimp.

I am checking out both of those options. Thanks, Steve. I recall you posting about Lightroom on your blog.