Ottawa's rail watchers have so little to get excited about, so I'm asking your indulgence as I present to you a rare visitor to the Via Rail/CN Smiths Falls Subdivision. I was driving around Twin Elm with my daughters in tow when I saw some odd looking hopper cars at the SynAgri feed mill. Of course, I had no camera with me when I realized that CN had delivered a few Potash Corp. three-bay hopper cars to the mill's spur, including this one below, which was pushed all the way to the end.

While these cars are, of course, common in Western Canada and are seen on trains in the east, I have never seen them up here in Ottawa. Needless to say, I made a return trip the following day (Oct 3) to document these hoppers, western stalwarts making a guest appearance in this eastern rail outpost. Above: The interesting thing I noticed when I arrived at this mill was that one Potash car was spotted on the spur by itself, apart from three other cars.

My return trip also allowed me a chance to take some shots of the feed mill, which I have mentioned and shot in previous posts. It also gave me a chance to think about what they were doing at the mill. Looking at the SynAgri website, it's clear that they provide fertilizer to their clients (farmers), which would explain a delivery in Potash cars. Whether these cars are filled with a Potash Corp product or not, I cannot say, but I would say it's a pretty good guess. I've been to this place a few times and have shot a few different hopper cars on the spur, including one in this post that generated an interesting discussion among the readers. 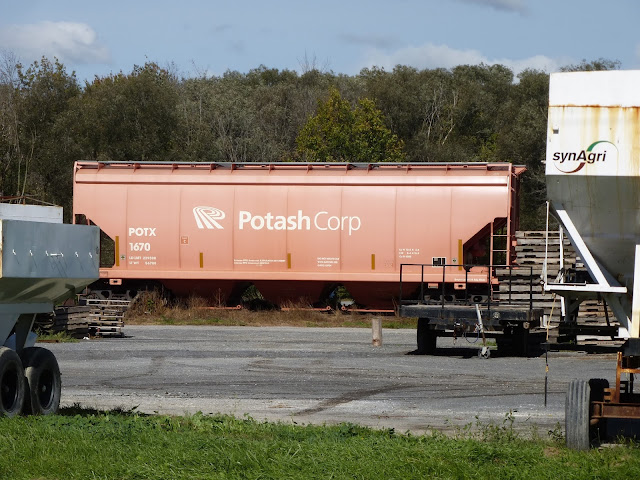 This is a shot from Cambrian Road, above. Given that Ottawa is such a backwater when it comes to freight trains, seeing anything out of the ordinary is always a welcome diversion for me. This shot shows you that it's a busy time of year for the mill. I noticed quite a number of loading devices and other pieces of equipment strewn around the property, as you can see from this shot. 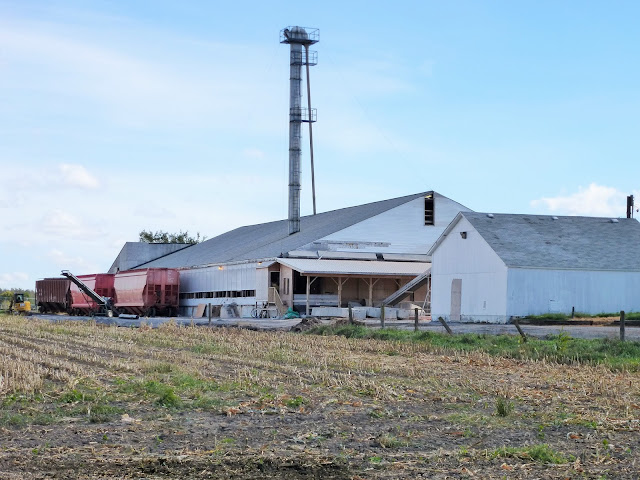 This shot above shows you what the mill complex looks like. You can see the other three hoppers, including two more Potash cars and one patched for a leasing company. You can see a loading device and a small Caterpillar machine next to the cars. I was happy that I caught these cars on a Saturday, since CN 589 serves this mill on Sundays, which means these cars were likely gone soon after I took these shots. I had to colour correct this shot and use the saturation tool to clean up the lighting a bit.

Now, here's the same shot with the black and white treatment, below. There's a timelessness to this scene, which I think lends itself to black and white. I really love shooting at this mill. I wish I could catch the switching operation here some day. 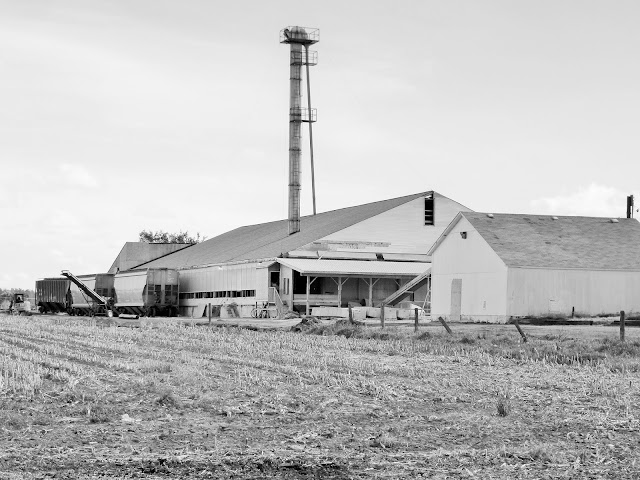 Oh, and that field next to the mill is a corn field. Luckily, a wide swath had been harvested and cleared recently, which allowed me to get these shots. 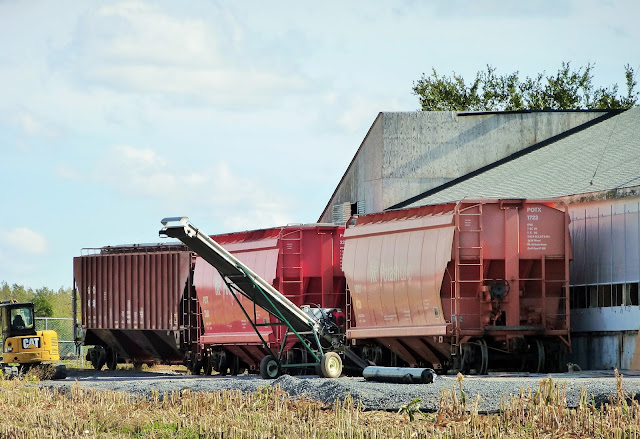 Here's a closer look at the cars, two of which appear to be newer three-bay 4300 cubic foot capacity Potash Corp. cars. The one in the middle looks new. 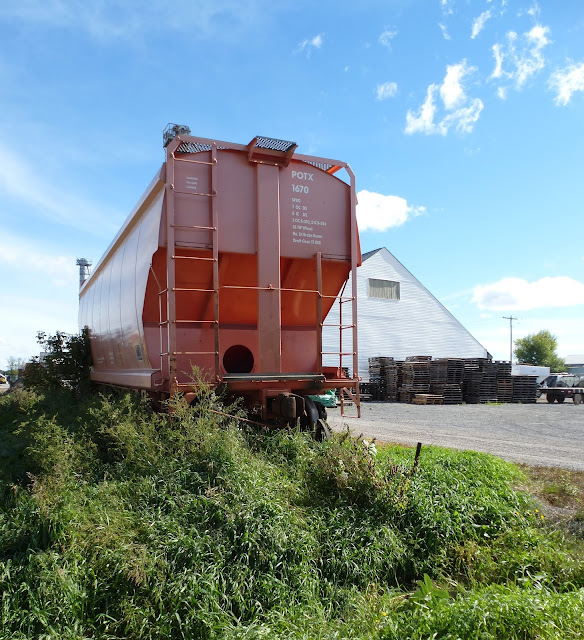 Here's a final shot of the spur, which comes much closer to Twin Elm Road than I thought. I have made my rounds here a few times and never knew the spur came out this far, since much of it is buried in weeds and grass during the summer. You can just make out the shark teeth at the end of the spur through the weeds.
So, for those of you who likely see far more trains than I do, thanks for your indulgence on this post. I know these cars might not be all that interesting to those of you who see them all the time, but to me, they are a rare treat, especially since they are graffiti free. And, as my fellow blogger Eric Gagnon of Trackside Treasure mentioned, this is the year of the mundane, so I'm hoping this is a good addition to that theme.
As I have learned from taking mundane shots when I was young, what seems mundane one day may been invaluable down the road. ﻿
Posted by Michael at Wednesday, October 14, 2015
Email ThisBlogThis!Share to TwitterShare to FacebookShare to Pinterest
Labels: Canadian National, CN, hopper cars, Nepean, Ottawa, Potash, railways, Smiths Falls Subdivision, Twin Elm Ontario

Nice Photos, I too passed by Twin Elm last weekend and saw the most freight cars I've ever seen there. I took some video and posted it on YouTube: https://www.youtube.com/watch?v=4rNbUS7JLl0

I like the black and white pic, it is impossible to tell what year that picture could be from.

Thanks, Dave and David. I was playing around with these pictures a fair bit because of the shadows, so black and white seemed like a natural fit. Thanks for the link, David H., good catch.

Dare I say the B&W photo could have been somewhere in the US Midwest or South? Neat effect.

Great job photographing the mundane, Michael. "Oh, it's just some covered hopper cars", we often say to ourselves. Another moment un-photographed. And gone. Lost.

Don't give up hope, Ottawans! Driving from Lancaster to Mont-Tremblant, I crossed four railway crossings, photographed Lachute and Alexandria stations, and caught a QGRY ballast train from Autoroute 50. Very encouraging finds among the fall colours.

Oh yes - and railfanning is a family-friendly, low-cost activity.

Thanks for sharing, Michael!
Eric

Thanks for the comments, Eric. Sounds like you had a prosperous journey. I wish I had the same success when I travelled to SW Ontario for Thanksgiving.

It was almost a complete shutout sadly.