As I mentioned recently, I had the opportunity earlier this month to ride this city's new O-Trains. The city's 8-km Trillium Line began to host new Alstom Coradia LINT trainsets a few weeks ago, which has allowed the service to increase train frequency and operate speedier service. The new trains now travel on a revamped line, which is complete with passing sidings, new track and new signals, all of which allow for a much better experience.

After a few initial glitches with the new service in the first week, the Trillium Line is now fully operational with the new trains. The following are a few observations I made when I took a trip from Bayview south to Confederation stations. 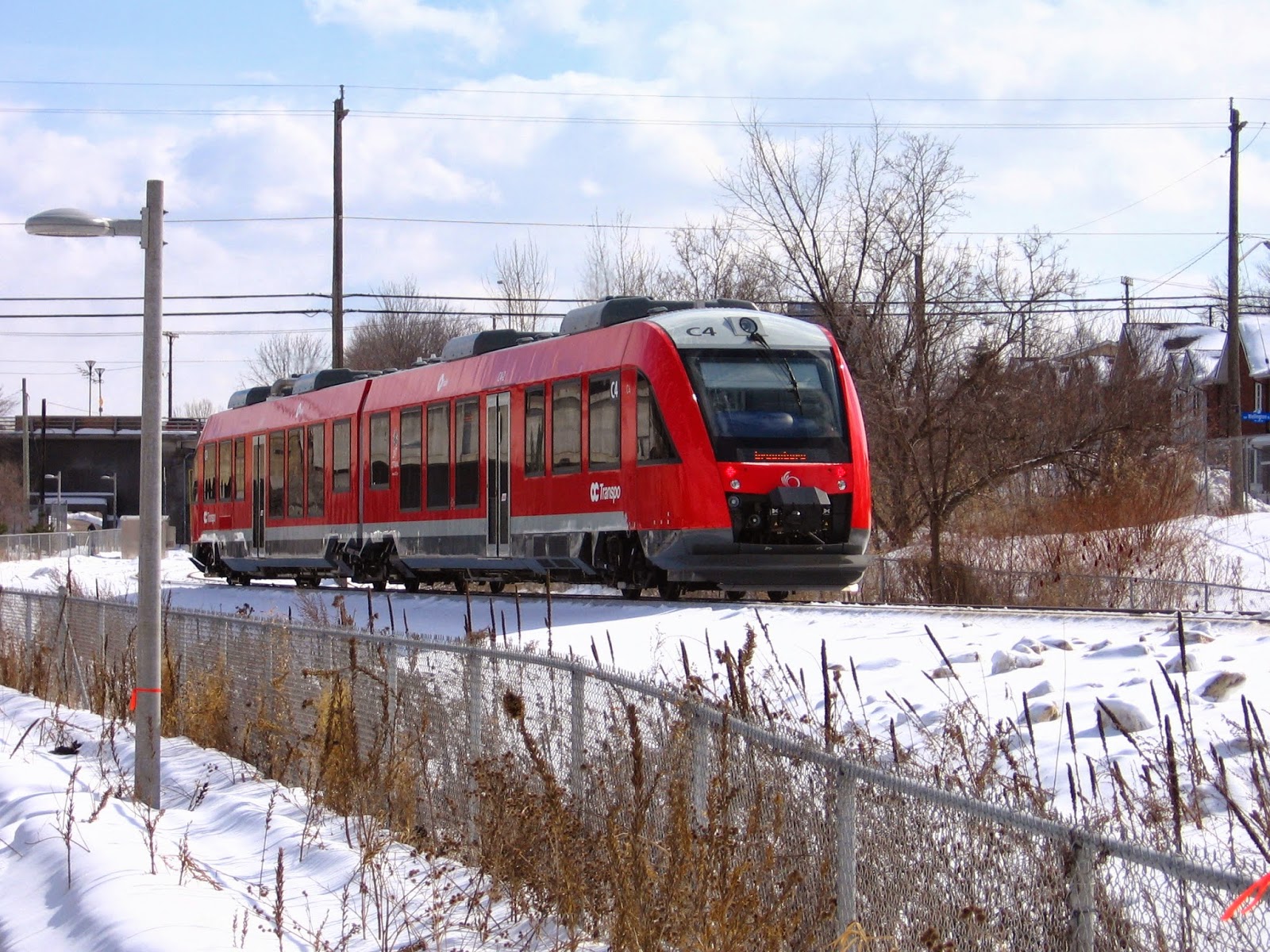 The new trains, in my opinion, look a little bulkier than the Bombadier Talent trains, but a reader reminded me that the Alstoms are sleeker in some ways. The platforms at all stations along the Trillium Line had to be extended to accommodate the profile of the more slender new trainsets. I made note of this when I boarded the train.

I should mention that, upon arriving at Bayview Station, a trainset was idling. These trainsets do not sound like a conventional train when idling. They sound much more like a bus or truck.

On board, the seats are arranged as they would be on a bus, with the exception of a few areas where seats are facing each other, much like you'd see at the end of a Via Rail passenger coach. This seating alignment probably works for most. For me, I found the leg room lacking. I found my knees were rammed up against the backs of the seats in front of me. I guess these seats weren't built for tall guys. 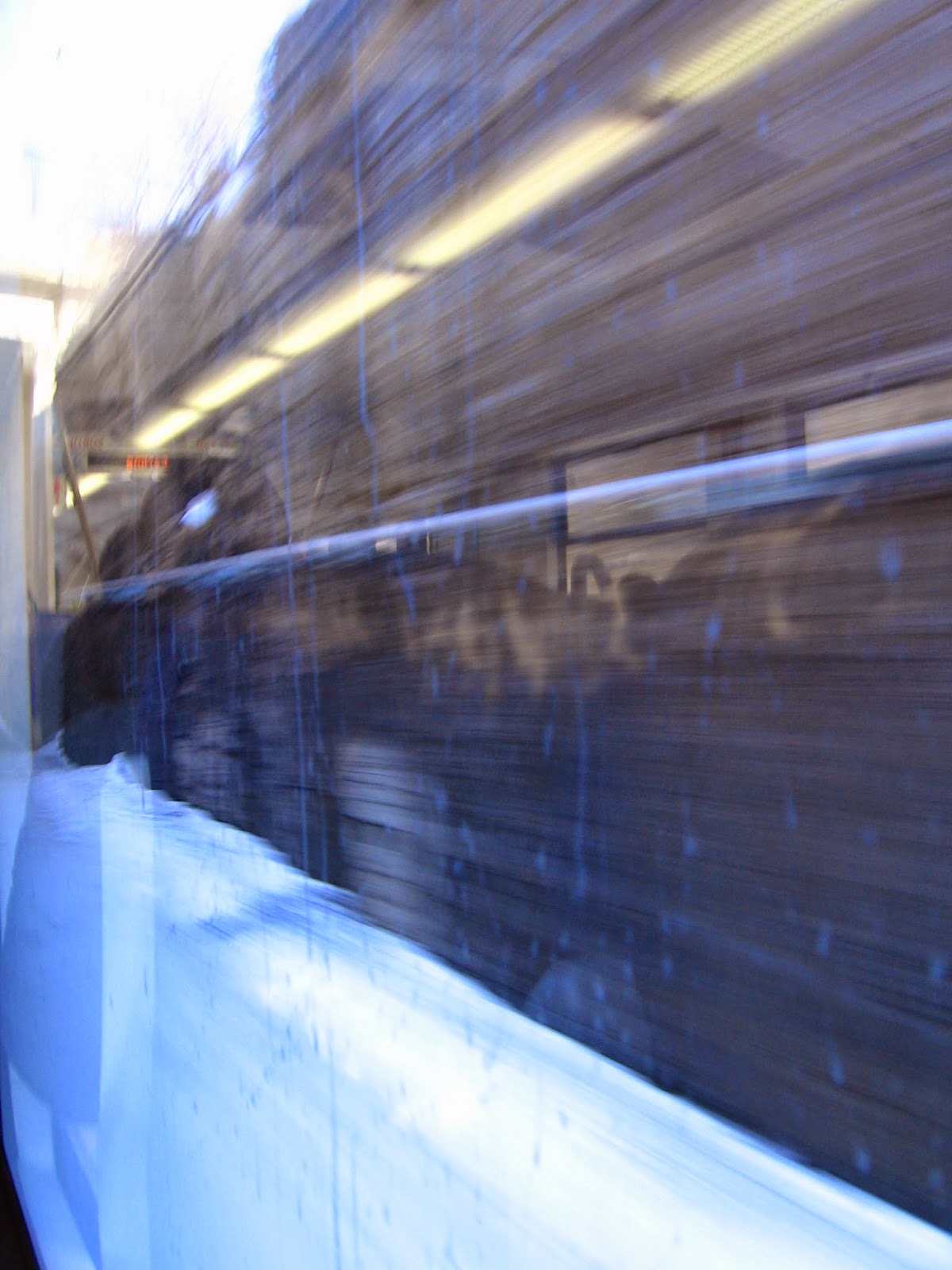 Enjoy the view out of the giant picture windows in the new O-Trains.

The ride itself was smooth. The new tracks on the Trillium Line and the new trains made for a nice trip. The picture windows in the new trains are massive (as you see above), which allow you to get an interesting view of the rock cut that CP Rail made to recess its old Ellwood and Prescott Subdivision right-of-way beneath the surrounding neighbourhood in the Little Italy area. 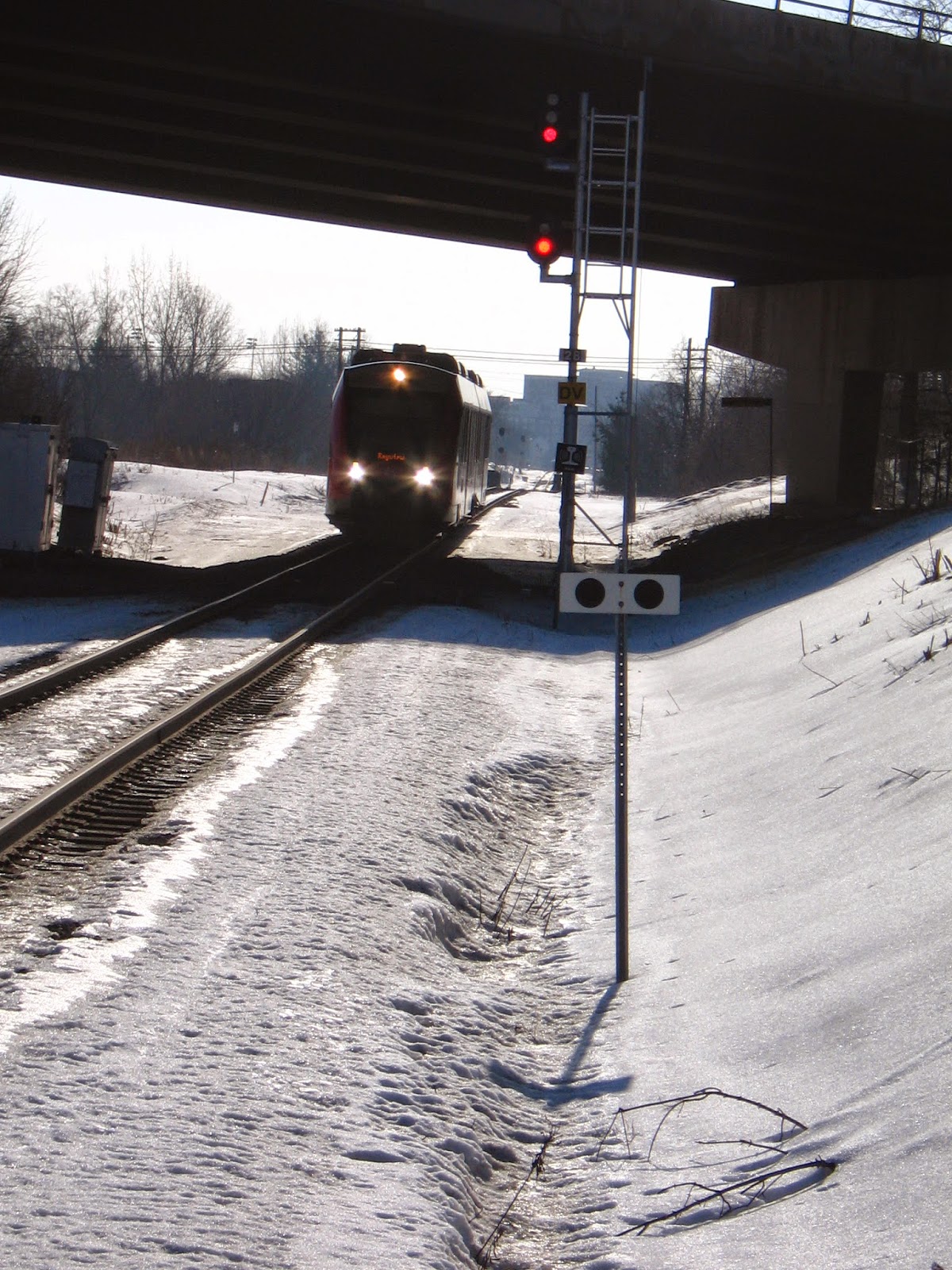 A northbound O-Train passes under Bronson Avenue as its approaches Confederation Station.

I did notice some small touches along the line that, for a railway fan, were classy tips of the hat to the line's past. For one, those shiny metal boxes that you see at the train stations were all labelled "Capital Railway Ellwood Subdivision." I like that the city maintains an official name for its light rail service and continues to refer to the line by its Ellwood moniker. An interesting break from tradition, however, is the kilometer post designation. I noticed that the line has km posts rather than mileposts.

I also saw that a number of streets that the line passes under are either labelled with small signs connected to the tunnels beneath the streets or large signs that face the tracks. For example, when my train was passing beneath Gladstone Avenue, there was a large sign facing the tracks that read "Gladstone." 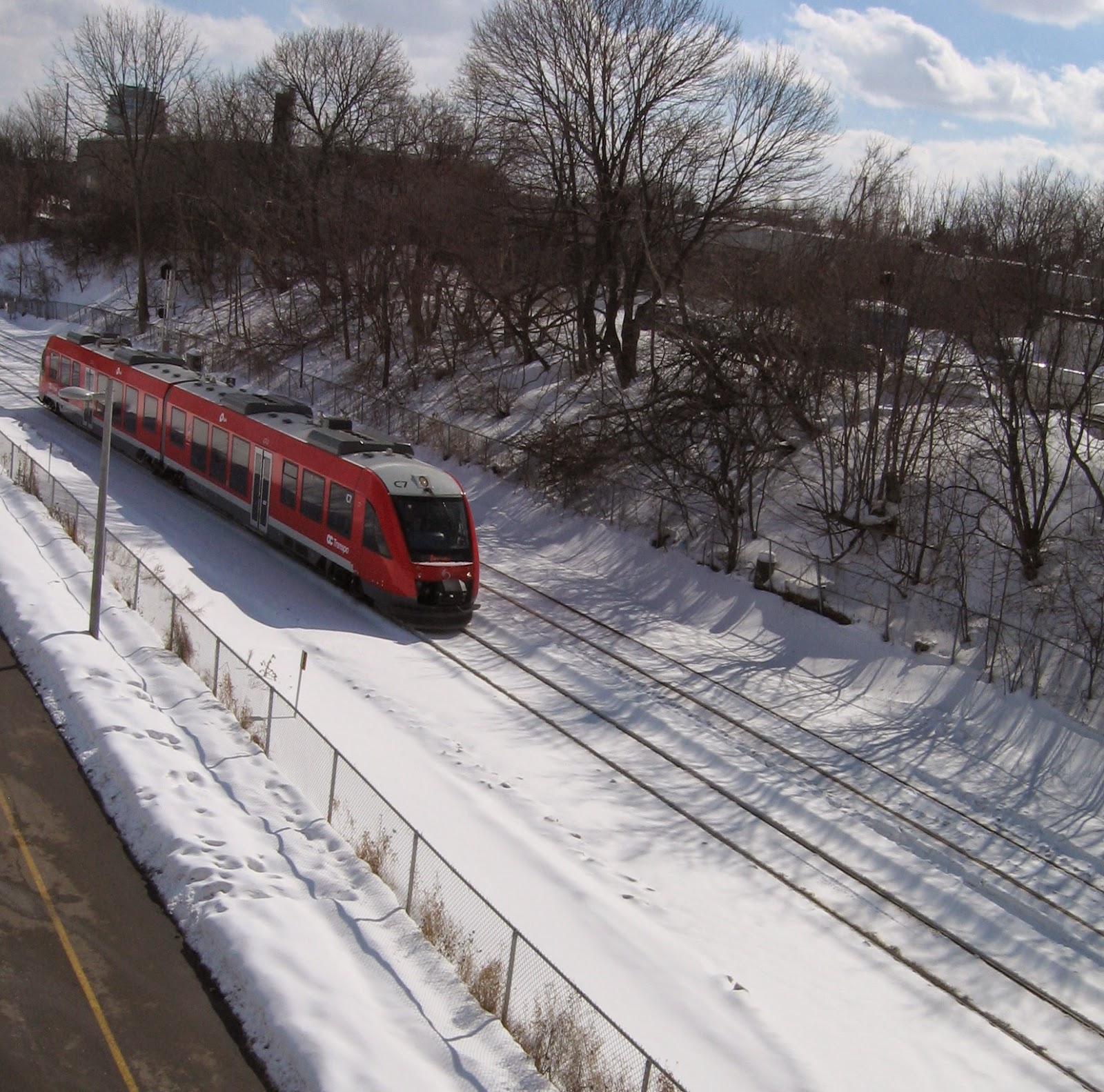 Northbound O-Train approaches the Somerset Street overpass. A long staircase on the overpass makes railway photography easy and safe.
﻿
As I previously mentioned, the line's Confederation Station seems pretty isolated, although this is hardly a new development. This station was in place when the service first launched. I figure it was placed where it was because of its close proximity to several government office buildings and Canada Post facilities nearby. Still, it seems a little far from the closest neighbourhoods off Heron Road. But it's still only about 10-15 minutes away if you are walking. 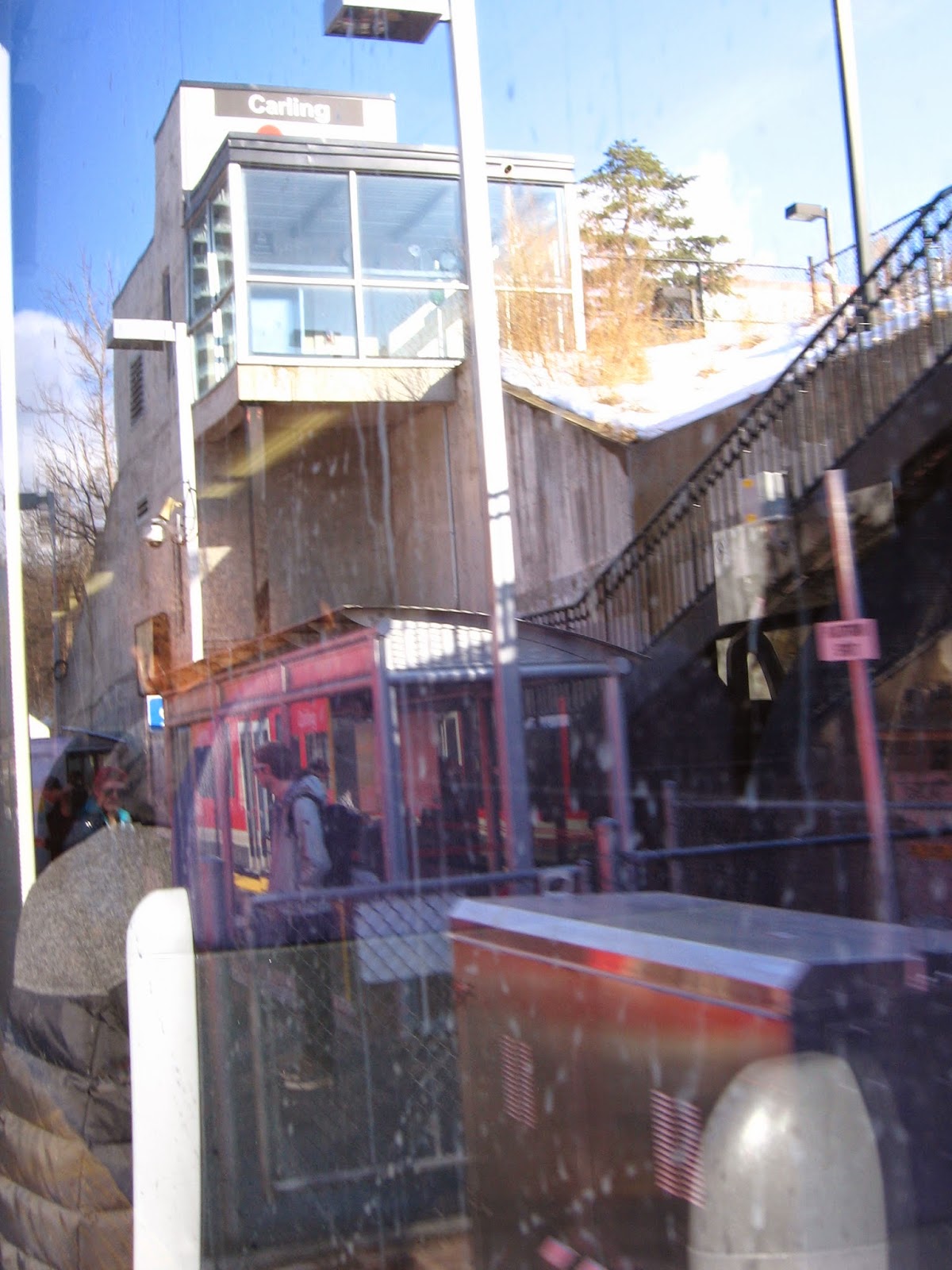 It was hard to get a photograph of stations along the line from inside the train, given the light and reflection, but I'm hoping this above shot gives you a rough idea of what some of the stations look like along the line. My train was manned by an operator and two fare inspectors positioned at either end of the train. For most people, getting on board is as simple as passing their Presto card over the scanners at each station. Those trying to use bus tickets were removed from the train.

Overall, it was a great experience. The wait for a train is no more than five minutes now, which is great for commuters. Here's one last shot I took (below) when I was walking east on Heron Road to Bank Street. This is an old right-of-way, by the looks of it. I'm not sure what line this may have been. (Update - Read Alex's comment below, which explains that this was an old CP right-of-way) Perhaps one of my Ottawa readers can fill me in. I have done some initial research on this old right-of-way but have not found anything yet. Still, a good shot of Ottawa's railway past. 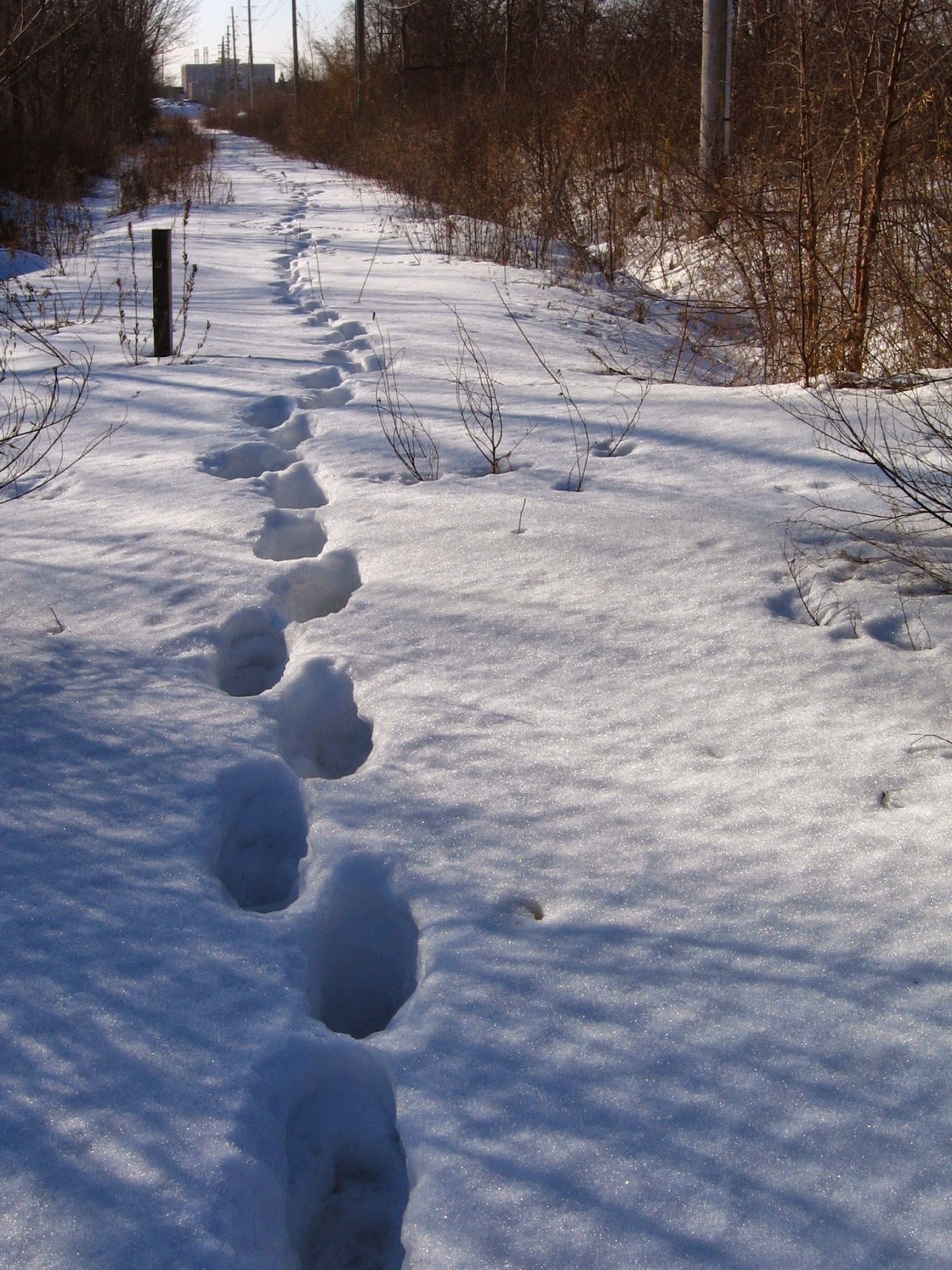 Congratulations on post #100! Looking forward to the next hundred... thousand...

Congratulations on this milestone, milepost, mileboard what have you...

On-train station photos are always a gamble...if only the stations could be built a little farther away from the track, eh?

I'm glad you finally got out to ride the new trains, They definitely sound more like a truck than a train, as they have two diesel engines similar to a road vehicle. The seats are also a bit cramped for me.

With regard to the size of the trains, they are noticeably taller, but are about the same width across as the Talents at the threshold of the doors. The Talents were rounded in shape however, which meant the train was wider overall, and had a noticeably wider interior aisle. The LINTs need a different platform extender because there is a large sway bar attached to the side of the train that would have interfered with the old extenders, so now half of the gap is made up by gap fillers attached to the outside of the trains.

Capital Railway maintains all of those classic touches because it is a federally regulated railway, and the reach of Transport Canada is long (even GO Transit isn't federally regulated). Although it is called "light Rail" by the City of Ottawa, for all regulatory purposes it is a real railway, and must follow the CROR. The Ellwood moniker remains in good use as it is how the location of the trains is communicated to RTC in Dorval. Reports from Capital Railway always include a message that "Capital Railways operates using the Metric System."

There is a small street sign that says "Gladstone" on the underside of the overpass. The larger black on white sign actually marks the signal siding, and an identical sign marks the Brookfield siding further down the track.

The ROW you see from Heron was the CP line that extended from the Ellwood sub north parallel to the CN/VIA line, across and up what is now Vanier Parkway, ending near what is now the Sussex/King Edward intersection. geoOttawa, http://maps.ottawa.ca/geoottawa/, has excellent historical imagery, and it shows the line being removed between 1965 and 1976, as rails were pulled back across the capital. Remnants of this line remain visible from the O-Train, such as the back of the LCBO warehouse on Bank Street, which has a rail spur. geoOttawa also has excellent images of the Dow's Lake tunnel being constructed, and the bridge that existed before that.

Another great resource is the Ontario Railway Map Collection, a KMZ file for Google Earth. It identifies the old alignment you mention.

Thanks for the comments, Eric and Alex. Eric -- yep, the station photos didn't turn out all that well, but I figured it was worth a try. Alex -- thanks for the additional information on the new O-Trains. You explained the difference between the new ones and the old ones much better than I ever could.

The right of way I believe is the Bytown & Prescott Railway, the first to reach the capital sometime before 1900. If you're driving (or walking) along Bank near Kilborn, the alignment of the houses on either side of the road give a clear idea of where the line once passed.