At long last, I am able to share some big-time railroading photos from my recent adventures in Bedell Ontario, a small hamlet south of Ottawa. Bedell is situated on the Canadian Pacific's Winchester Subdivision, the main line between Montreal and Smiths Falls. Due to computer issues, which have finally been resolved, I was able to recover my Bedell shots and back them up. Yes, this was a very good lesson for me to regularly back up my photos.

On July 17th, I made my first visit to Bedell and was able to capture shots of the remnants of the old CP Prescott Subdivision, which was being scrapped. After doing a little exploring in the weeds of that old line, I heard a westbound freight making its way toward my spot along the main line. For those unfamiliar with Bedell, it is a former CP stopover and servicing point. There is little left now, but the area does offer a spectacular view of main line action from an old parking lot and plateau perched trackside, both of which offer safe, legal places to shoot trains.

This freight was being led by ES44AC 8719 and AC4400CW 8565. After shooting mainly old geeps around Ottawa, it was refreshing to see some modern workhorses. As I was putting this post together, I thought about the last time I shot CP action and I realized that it was in 1992 in Banff, Alberta. You can read about those adventures here and here. 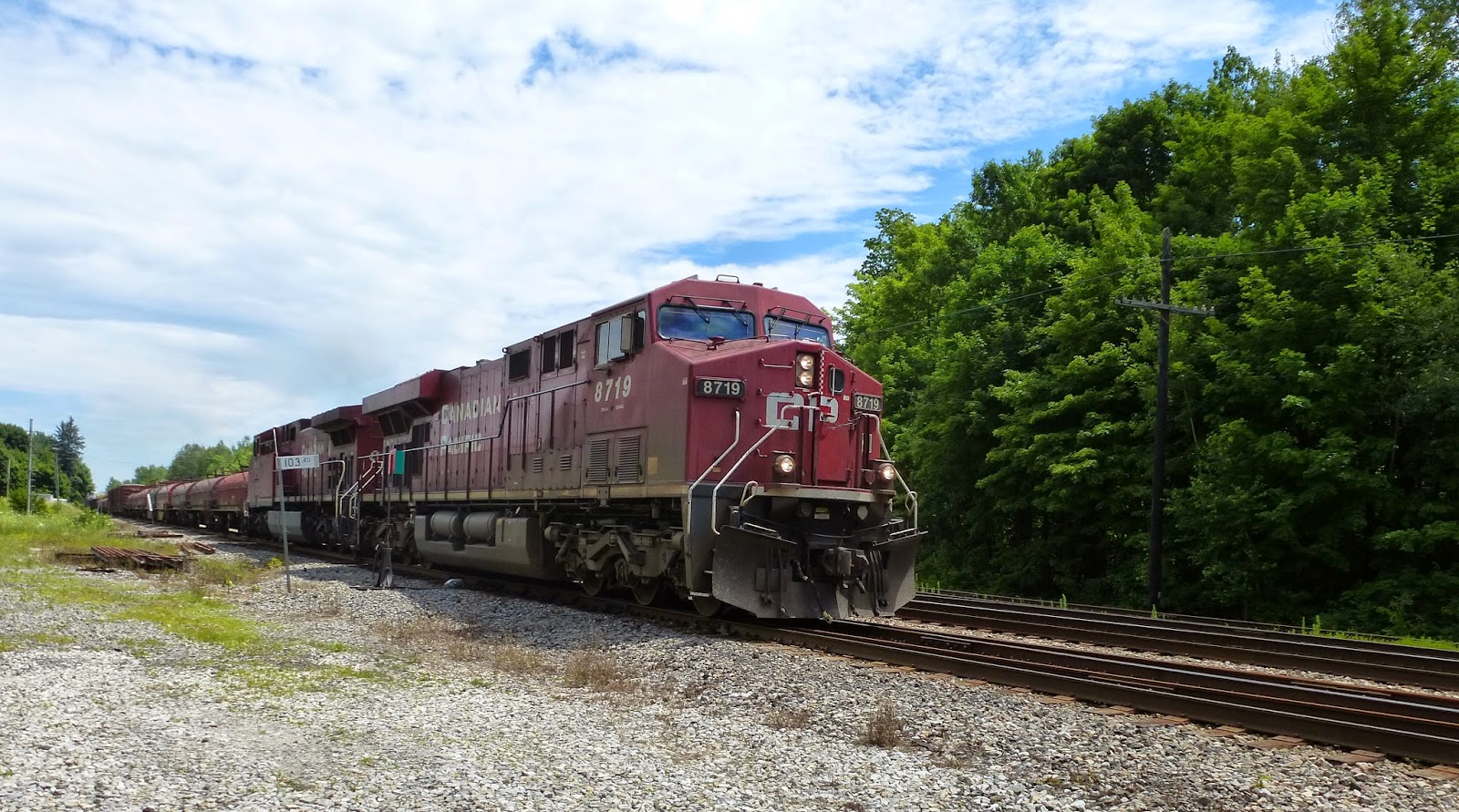 As you can see, I was unfortunately on the shadow side of the train, which wasn't a huge loss considering the lighting was decent. You can see the steel coil cars trailing the lead units above and below. In the shot below, you can also see a turnout for bad orders. This turnout was once part of a much larger rail yard in the area, most of which is gone. You can also see a bit of an old signal tower behind the trailing 8565 unit. You can see that tower in the final shot below.

Although it may seem I was right beside the track, I can assure you I was a safe distance from the train and using my camera's zoom. 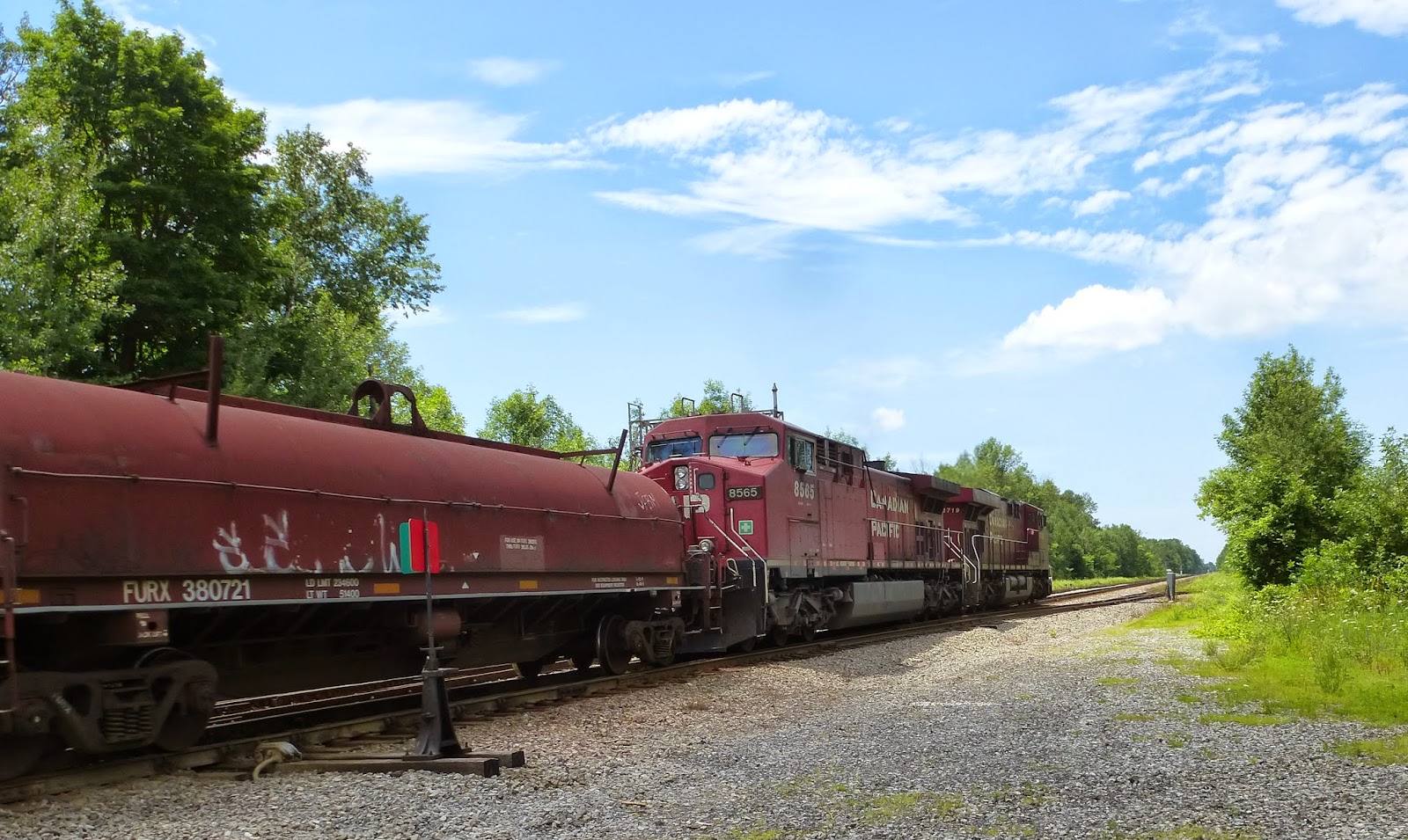 As I have mentioned before, a mixed freight is the best freight to shoot, in my opinion. Intermodal double-stack trains are the most common, but they don't offer much variety. This train was a true mix. It reminded me of the mixed freights I shot along the CSX Sarnia Subdivision as a teenager. Boxcars closely followed the coil cars on this train, as you can see below. 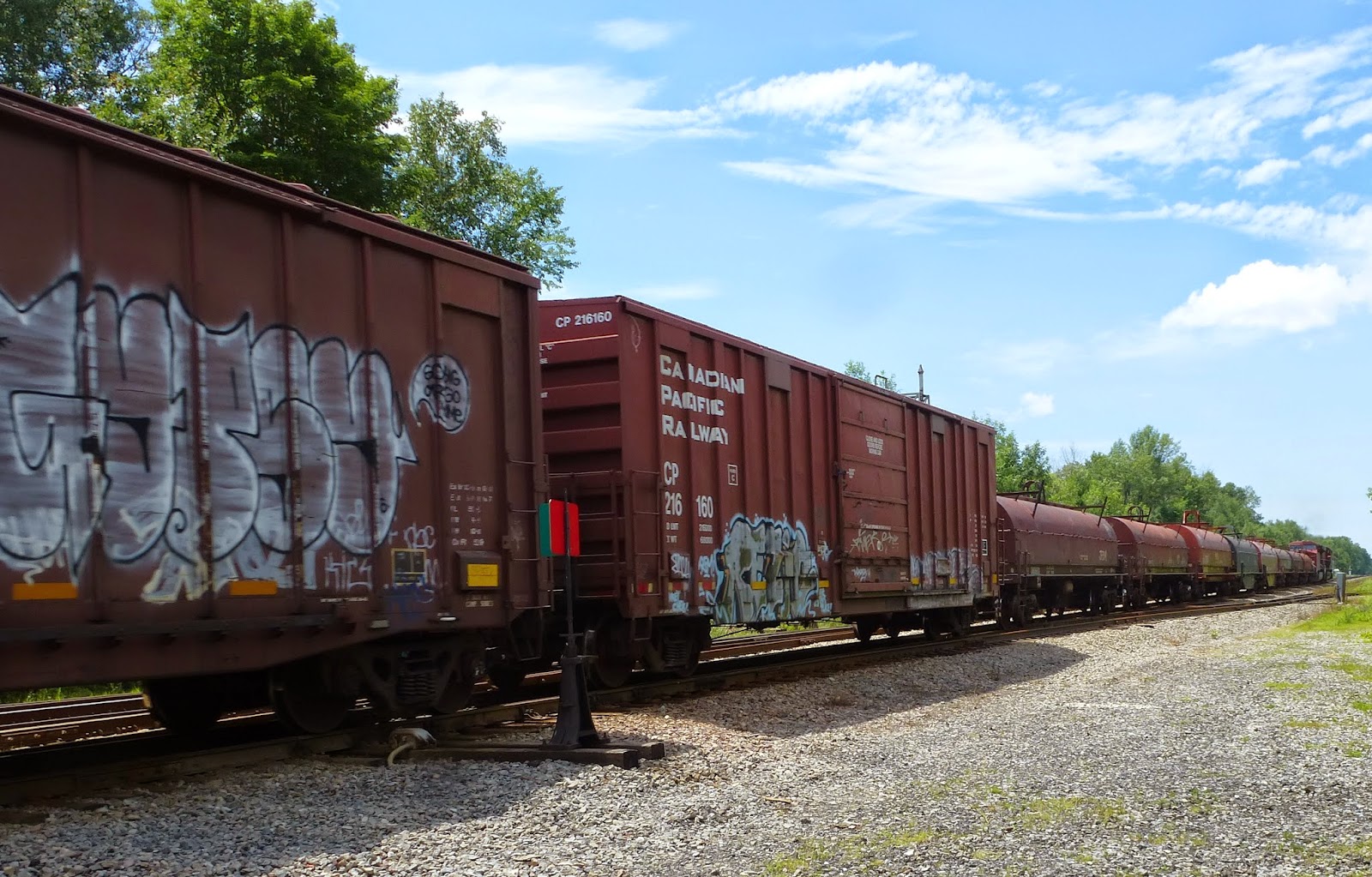 It wasn't long before a few ballast cars came into view with some old CP Rail multimarks. I have a HO-scale blue hopper car painted in this livery at home, so I took a shot. 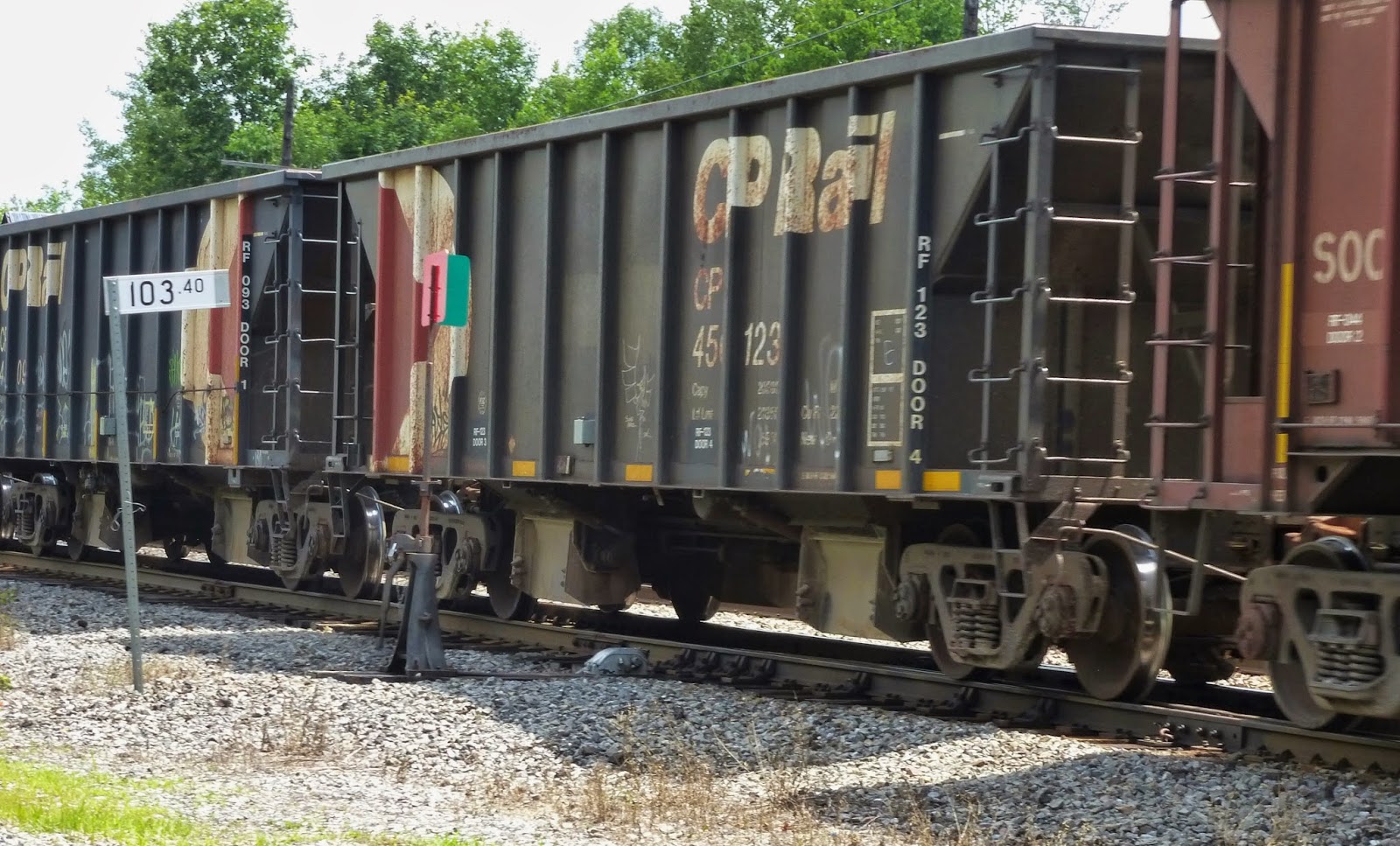 There was a long line of tank cars before a couple of hopper cars gave way to the double stacks at the end of the train. You can see the whistle sign in this shot, as well as old rail that had just been lifted from the old turnout that led to the abandoned North Prescott Spur, formerly the Prescott Sub. 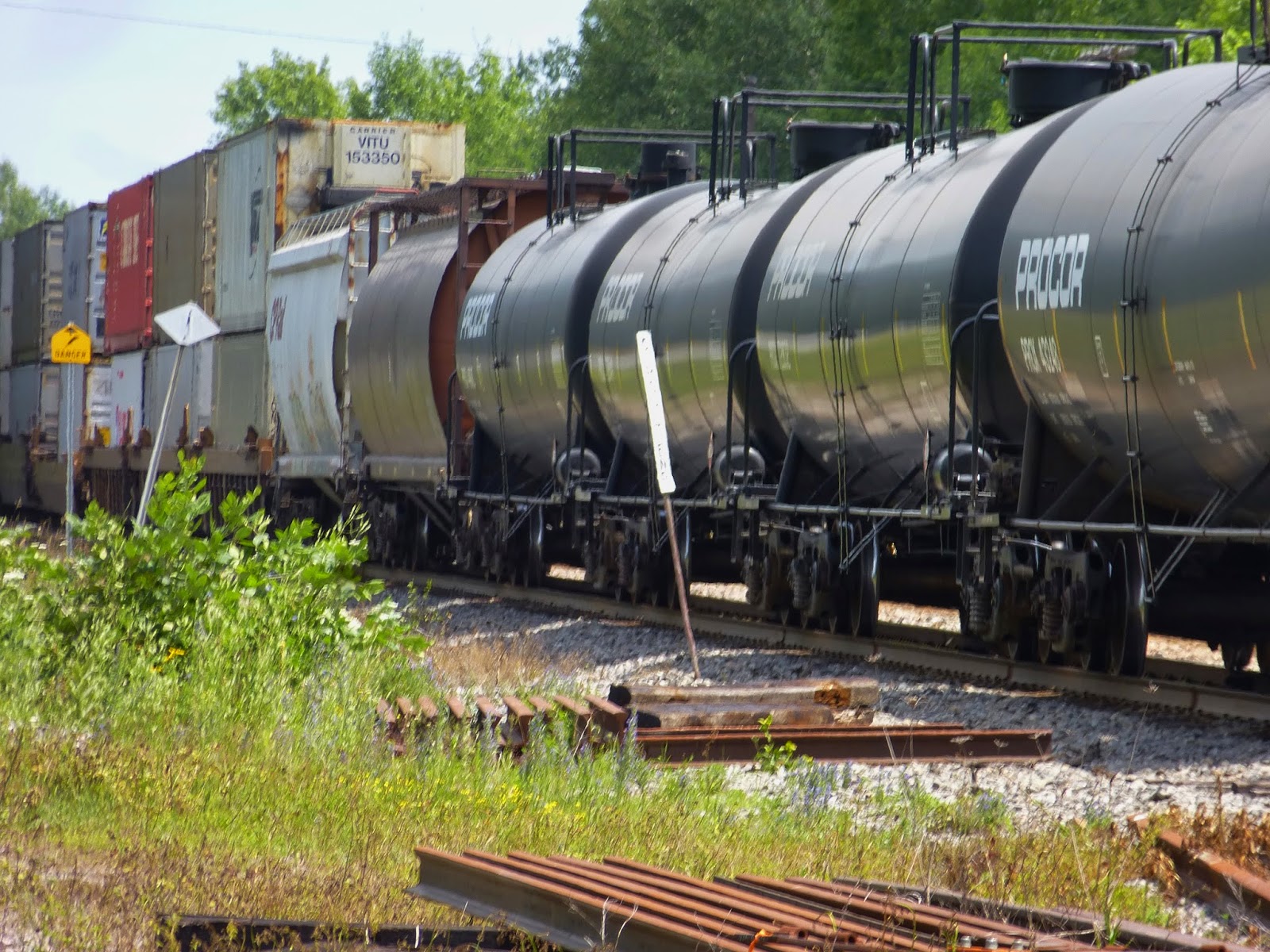 The double stacks included a number of Canadian Tire containers, which wasn't unusual since CP is the retailer's main long-distance cargo hauler. The sunny blue skies, scattered clouds and full summer foliage made for a perfect backdrop. 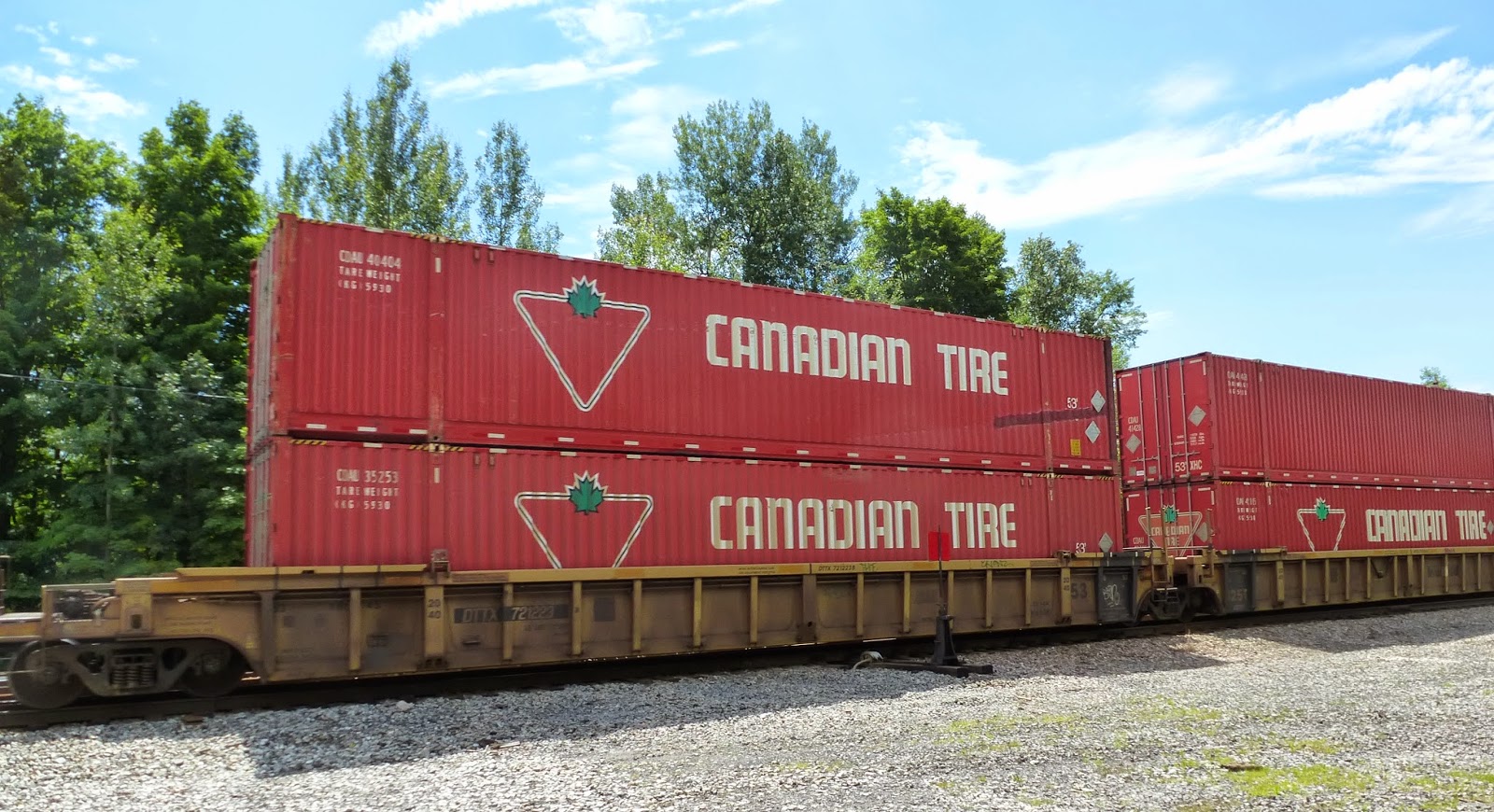 Alas, all good things must come to an end, as did this manifest freight. You can see the bad order turnout more clearly in this shot as well as some angled crossing signals at the Bedell Road crossing. These lights are angled due to the path of the road, which parallels the track before taking a sharp turn at the crossing. 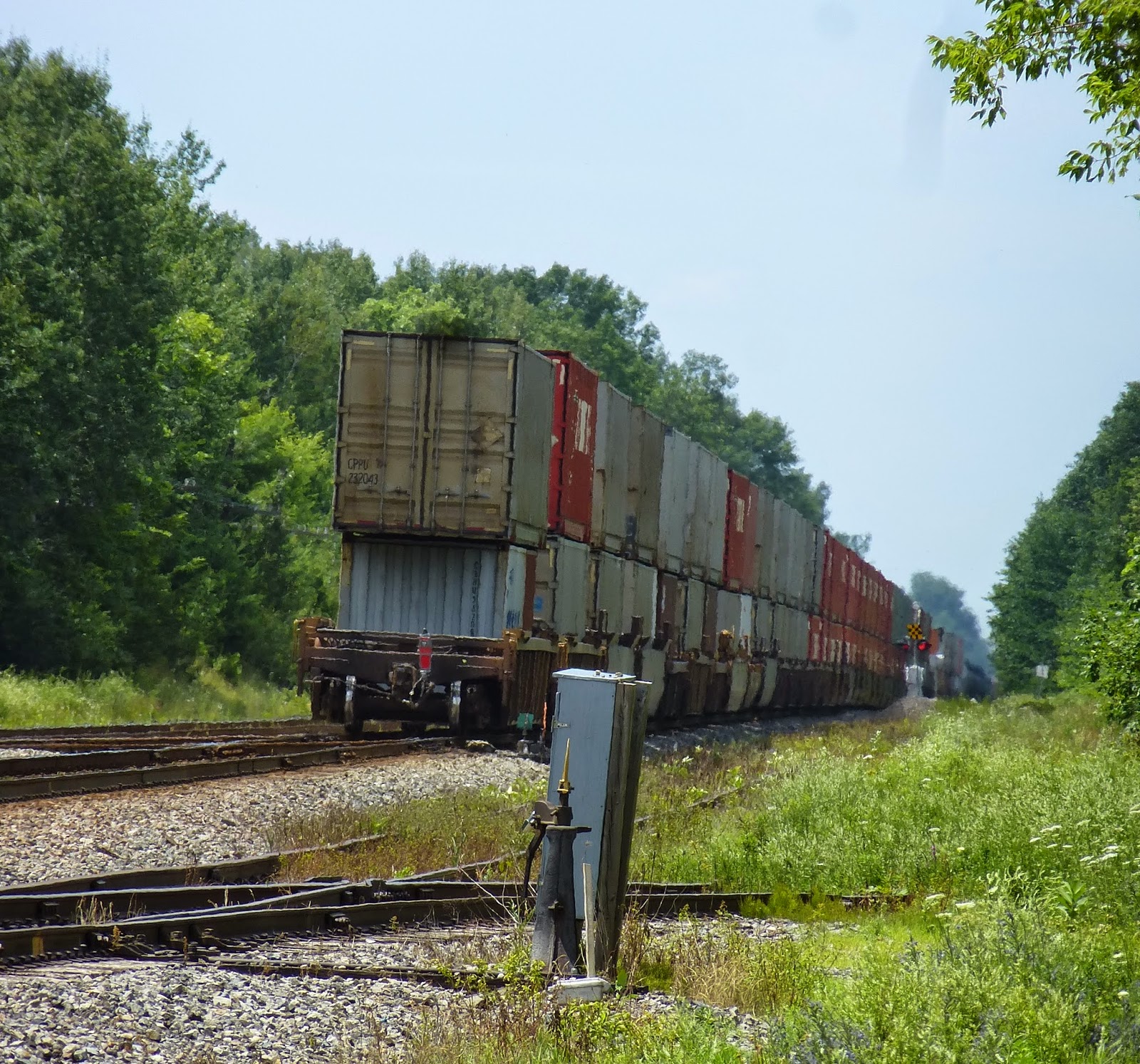 A few weeks later, I made sure to get a shot of the old signal tower, just in case the railway decides to get rid of this relic. 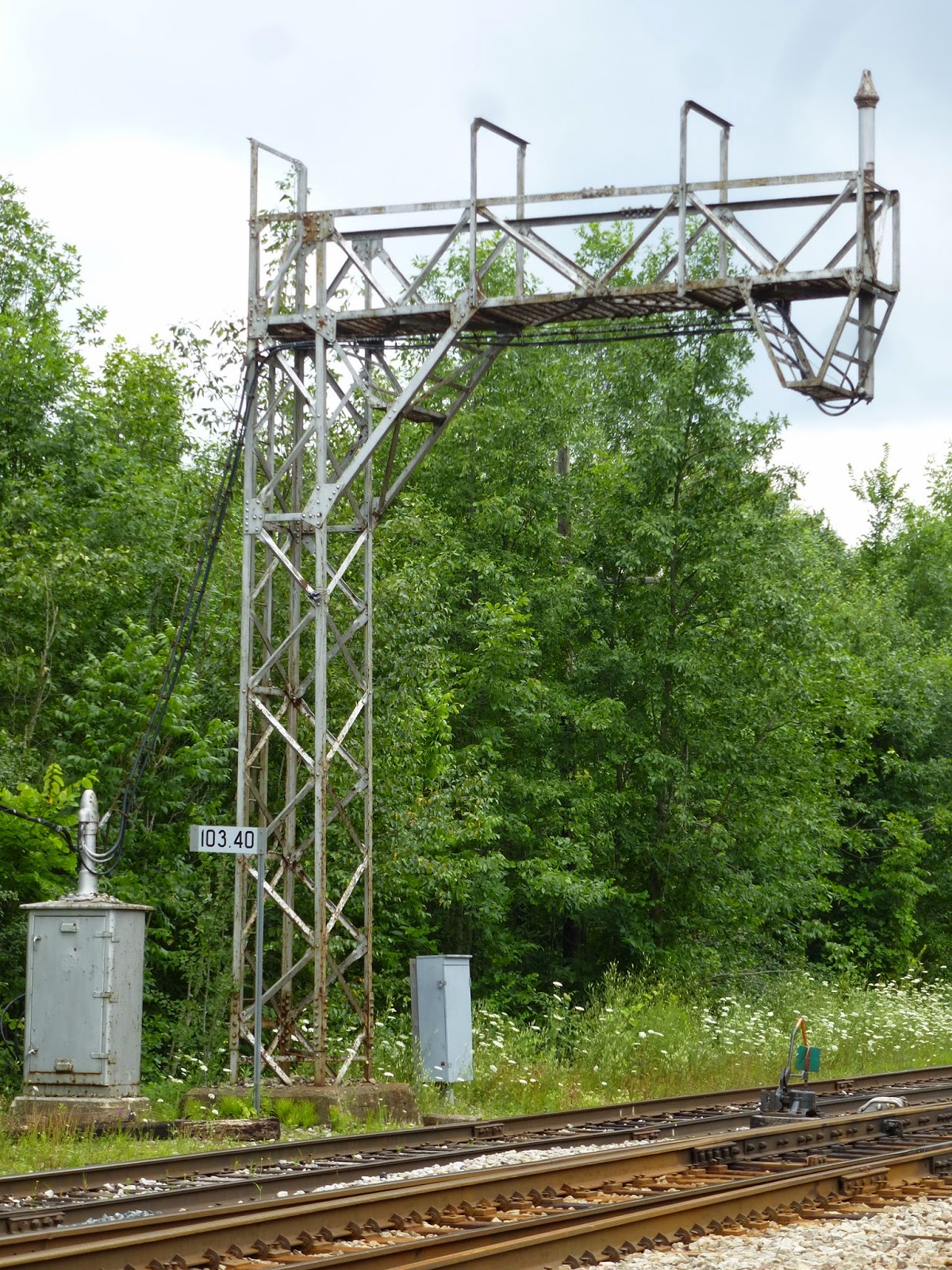 So that was my first encounter with a CP freight on the Winchester Sub. I am planning to return to Bedell very soon to see if there is anything left from the old Prescott Subdivision. Also, I hope I won't have to wait 22 years to shoot my next CP freight.
﻿
Posted by Michael at Thursday, September 11, 2014

Very nice, Michael! I agree that mixed freight trains are the most interesting.

Nice post, Michael. CP was first to run mixed-block trains, and occasionally CN gets in on the act. An interesting mix. It seems CN is the last carload Class 1 in North America, at least in Eastern Canada!

Thanks for the comments, Steve and Eric. Steve- I have read a few articles in Branchline about Bedell, but not the ones you mentioned, so will check them out. This area certainly is fascinating for a railway history nerd like me.