Catching up with Grand Trunk, 1992

Here is another example of my exploits in the summer of 1992. As I mentioned in a previous post, it was a good time to shoot railway action. There were a number of things to see in the busy Sarnia Yard for a variety of reasons. But my encounter with a parked Grand Trunk ballast train was one of the better catches.

This train was parked at the east end of the yard, likely waiting clearance to proceed through the old St. Clair Tunnel, which was in its last months as a link below the St. Clair River to Michigan. In the 1990s, the Grand Trunk operated as its own operation across the river, although it was owned by CN. GT was one of the major rail carriers in Michigan, from Port Huron all the way down the Detroit and to points west. Today, the GT colours have largely disappeared, replaced by CN colours.

In the 1990s, it was rare for me to see GT motive power in Sarnia Yard, so these shots were a real coup for me. This train, pulled by SD40-2s 5936 and 6416, was silent. The two new units had not been started. The first unit was obviously recently repainted while its mate was recently cleaned. Compare the shot of 5936 below to a more recent shot. It's held up pretty well over the years. 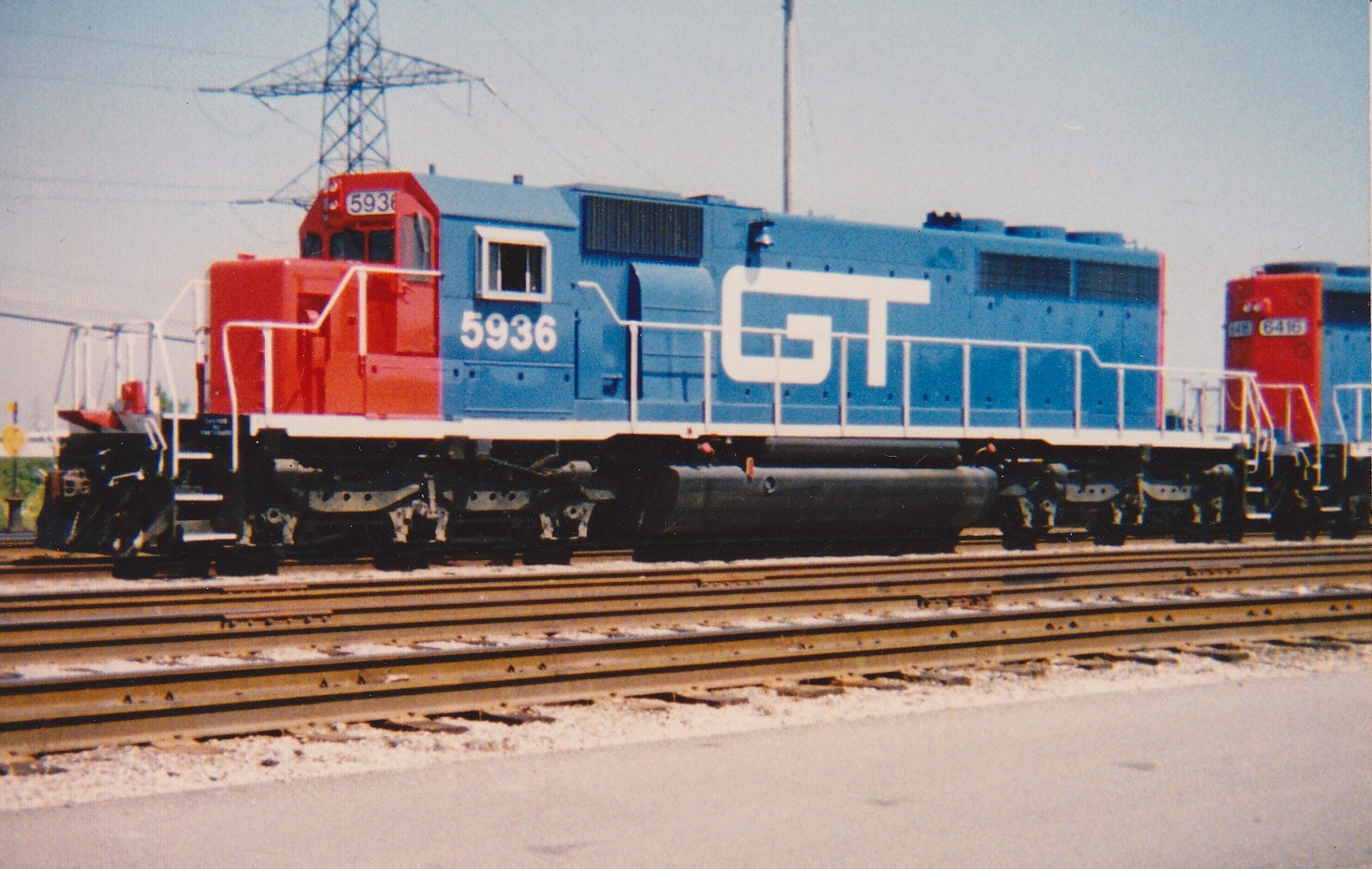 As was my custom in the 1990s, I liked to get shots of the front of parked trains. I have to mention that this was an incredibly stupid idea, not to mention trespassing. I strongly advise that you not do this ever. All I can say in my defence was I was young and stupid. You can tell how much things have changed since the 1990s. This train had no crew in site and yet, the lead cab was left with doors open. Notice the string of hoppers to the right, with some of the old blue GT ribbed hoppers in the mix. Also, you will notice the absence of ditch lights. 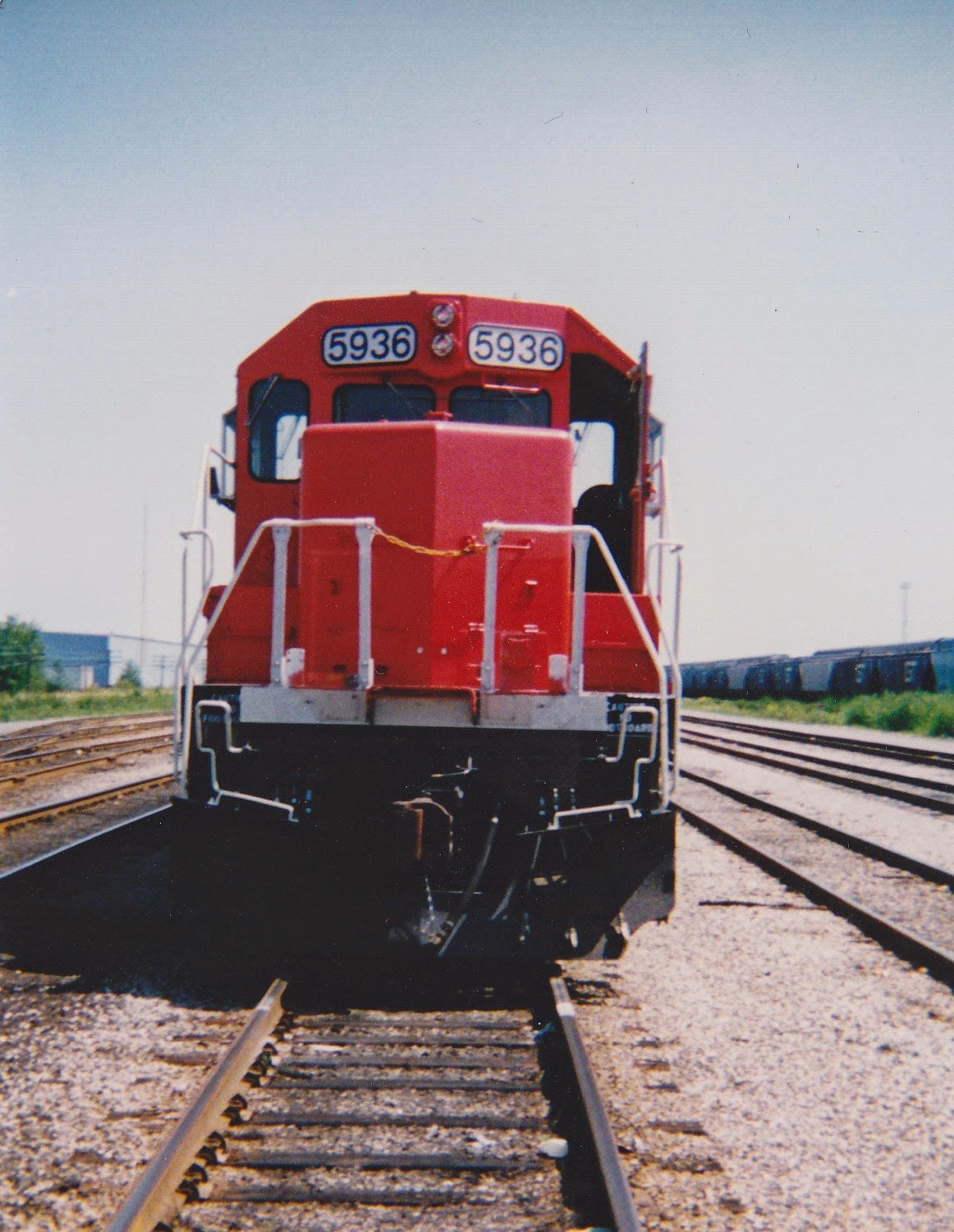 And here's a shot of trailing unit 641. Check out a shot of 6416 from 1986, when it was clad in Detroit, Toledo and Ironton colours. The DT&I has an interesting history, including being part of the spectacular Penn Central collapse. The road was purchased by the GT in 1980, although the road's orange and black colours outlasted the DT&I for years. Here's a shot of 6416 in a transitional scheme before it took on full blue and red GT colours. Not long after I took my shot, the unit took on CN colours. It definitely had a colourful run in the 1980s and 1990s. 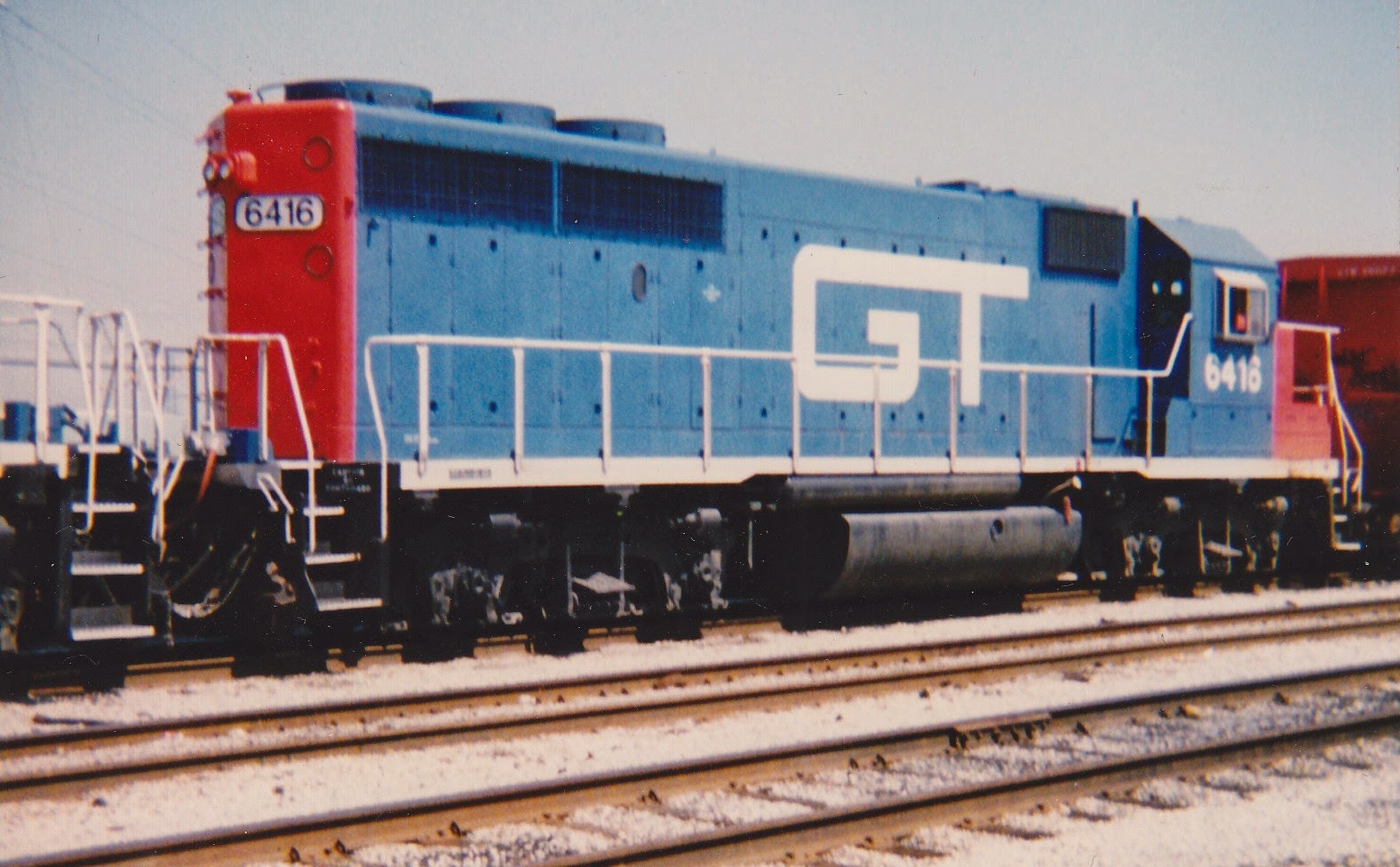 Here's a final shot of the train, complete with a long string of orange ballast cars in tow. I should mention one final story about my wanderings in Sarnia Yard around this time. 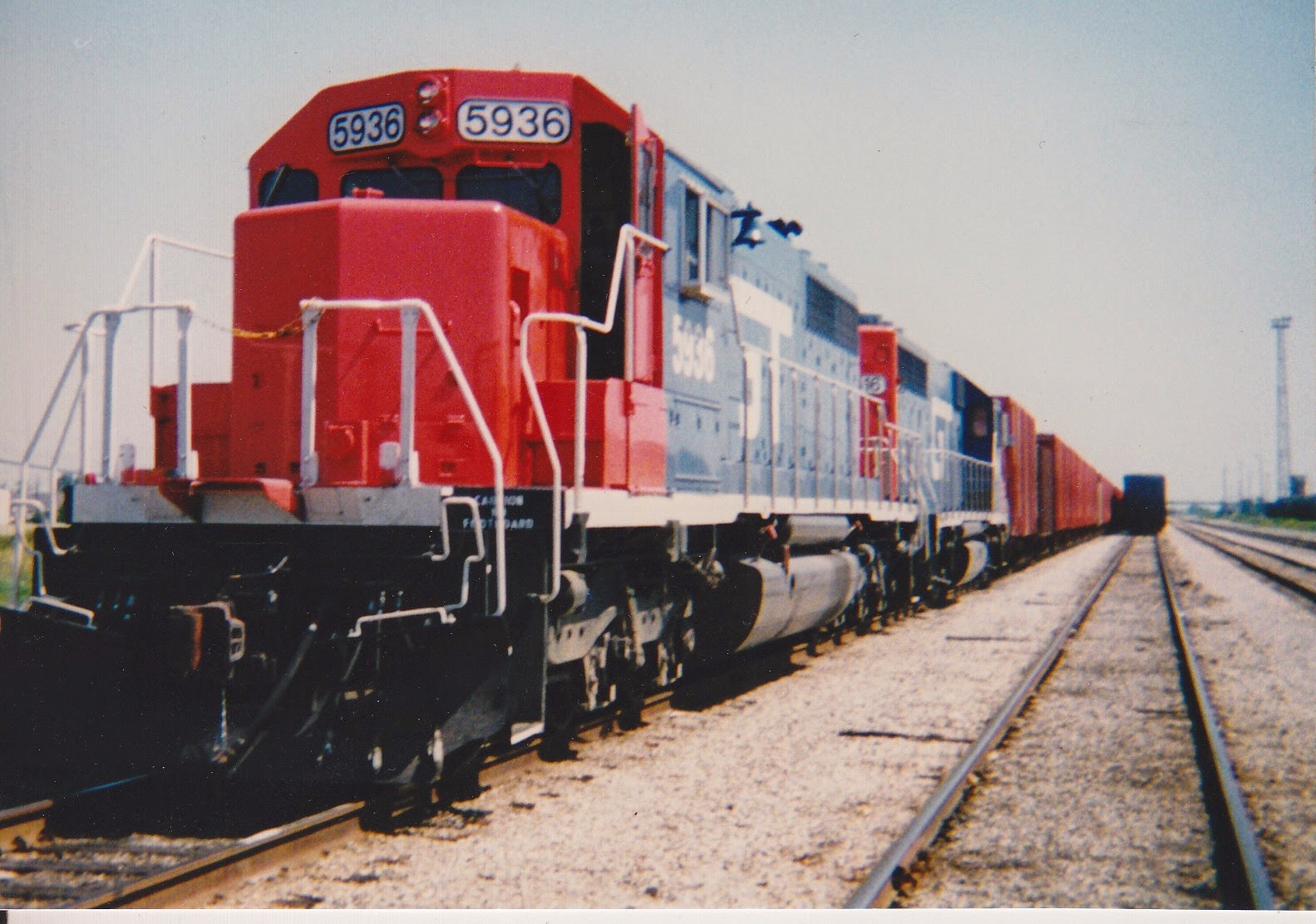 My run-in with CN personnel occurred right around this time. It may have happened on the day I caught up with this train. But I remember being in between tracks, taking photos when an engineer called out to me. He told me to walk to a switch and throw it for him, since he didn't want to get out of the cab. I remember doing what he said and being thanked for my effort. At the time, my brother was in a car, off to the side of the yard, waiting for me. He said he was pretty sure that I was getting in trouble for trespassing. It wasn't until that moment that I started to realize that what I was doing was not only wrong, but dangerous. I am lucky that the engineer that day was obviously being kind to a misguided railfan.

I can say that I no longer venture onto private property. I am happy that I wasn't arrested or hurt. It was a lesson learned without the consequences.
Posted by Michael at Thursday, July 10, 2014

Nice to see the GTW up close, Michael. My only observations have been in this area:
http://tracksidetreasure.blogspot.ca/2012/08/cr-gtw-dwp-ns-locomotives-on-cn-1994.html

Though a US subsidiary, there was enough in common with logos, colours and connections to have a real family resemblance to CN.

Thanks for the comments, gentlemen. This was a post I was hanging on to for some time, because these photos are among my favourites from the 1990s. I was lucky to get them and not get in trouble.